Researchers: Cats kill millions of mammals and birds in Poland every year 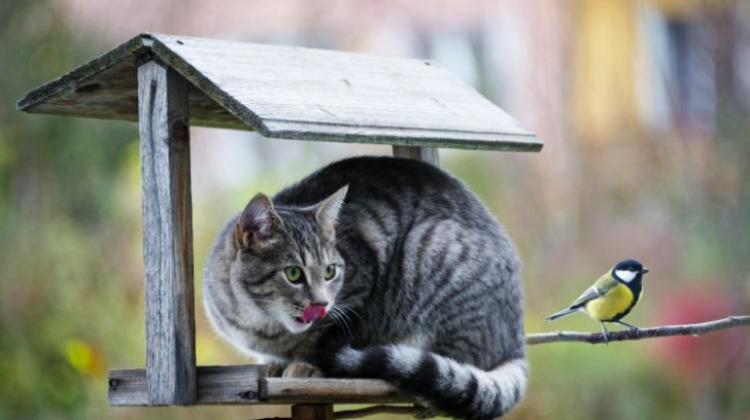 Approx. 631 million mammals and almost 144 million birds in Poland fall prey to cats every year, scientists estimate. They emphasize that the activity of these predators has a negative impact on biodiversity on the national scale, for example on endangered species of birds.

Estimates concerning the number of animals killed by cats in rural areas in Poland were prepared by: Dr. Dagny Krauze-Gryz from the Warsaw University of Life Sciences (WULS-SGGW), Dr. Jakub Gryz from the Forest Research Institute in Raszyn and Dr. Michał Żmihorski from the Mammal Research Institute PAS. The results of their research were presented in Global Ecology and Conservation (https://doi.org/10.1016/j.gecco.2018.e00516)

According to their calculations, cats in rural areas bring home about 48.1 million small mammals (their actual number ranges from 41.2 to 55,4 million) and 8.9 million birds (between 6.7 and 10.9 million) per year.

In the case of birds, the most common species that nest near human settlements are also the most common prey. These include sparrows, tree sparrows and starlings - species whose numbers are generally decreasing in Poland. Birds that nest on the ground, such as yellow wagtail, skylark or whip, are also vulnerable to cat attacks. Studies conducted in England indicate that cats can account for up to 30 percent deaths in the local sparrow population. Cats can also affect birds indirectly. American research shows, for example, that the stress caused by their presence may reduce fertility in birds.

"It was known that cats kill a lot, but the estimates we present surprise even us. There is always a problem with the precision of estimations in such situations, but the data we have indicate such numbers" - says Dr. Michał Żmihorski from the Mammal Research Institute PAS.

Dr. Dagny Krauze-Gryz from WULS-SGGW notes that now there are more articles and discussions about the problem of cat predation. This is due to the fact that the numbers of cats are growing - their population size is correlated with the number of people and at the same time does not depend on the numbers of their prey. The researcher also points out that Poland`s agricultural areas constitute an important refuge (also on a European scale) of birds associated with the agricultural landscape. But their numbers are decreasing, mainly due to changes taking place in the agricultural economy.

"Our research has shown that cats in the countryside are another factor that may threaten birds and other vertebrates in these areas" - emphasises the researcher.

The authors of the publication remind that about 94 million breeding pairs of birds live in Poland (this is the total number of all species). They show that village cats can kill a very large percentage of this number. Cats kill most birds in the spring (their hunting peaks in March), and least in November. This suggests that young birds fall prey to cats, which may limit the productivity of avian populations.

Mammals - mainly rodents - are the prey of cats most often in autumn, because that`s when their numbers in nature are highest.

Dr. Krauze-Gryz points out that cats in the countryside are not treated as household pets - they are kept mainly to catch mice. "Probably because of that they are very poorly fed - and sometimes not fed at all, or with leftovers that do not satisfy their nutritional needs, which forces them to hunt" - he says.

The expert adds that in the world steps are being taken to make people aware of the negative impact of their cats on the fauna. Attention is also drawn to the dangers to which cats that go outside are exposed, for example the risk of traffic accidents. "But in Poland it is difficult to act effectively, considering that the care of many cat owners for the well-being of cats is very limited" - says the scientist from the Warsaw University of Life Sciences.

"According to our observations, cats in the countryside are often neglected, poorly fed, they have to hunt to survive. This is the result of ignorance of the owners, or simply neglecting the nutritional needs of the cats" - confirms Dr. Żmihorski.

To assess the scale of predation of free-living cats in relation to small mammals and birds in rural areas in Poland, scientists collected data on the average number of cats on farms and used earlier information on the numbers and species diversity of cat prey. Data were collected in Mazowsze on average farms. Then, the researchers extrapolated the calculations from a smaller area to the entire Poland. In this way, they estimated the overall scale of predation of free-living cats on mammals and birds.

Dagny Krauze-Gryz notes that this method - like any other extrapolation - is burdened with error. "We assumed that hunting intensity of the cats we monitored and the number of cats on farms was a certain average. Of course, we have to take into account the variability in the country, for example regarding the number of cats kept on farms, how and - if at all - cats are fed, which translates into the local level of predation. But it seems to us that the possible error is not very significant" - she says.

She emphasises that the main point was to show the scale of the problem. "And it is a clear problem: cats kill millions of vertebrates every year on farmland across the country" - she says.

In recent years, there have been scientific arguments that cats are a risk factor threatening the survival of endangered species, for example birds. The authors of the publication remind that domestic cats prey on wild vertebrates and reduce their numbers, leading to their extinction on a local scale. It is estimated that in Canada alone, cats kill 100 to 350 million birds every year, and in the U.S. it is 2.4 billion to 12.3 billion mammals!

According to Michał Żmihorski, the conclusions from the study force us to rethink the nature conservation priorities. "If cats kill so many animals, why are we not doing anything about it? The legal situation today seems to be inconsistent: if I deliberately kill a bird of protected species, I will face consequences; but if I release a cat, which, as we know from our research, kills dozens of protected species, there are no consequences" - he notes.

The authors of the study postulate educating cat owners who know very little about the harmfulness of their animals. "We also suggest introducing legal solutions that - just like in the case of dogs - would limit the possibility of cats moving freely and burden owners with liability for damage to the environment" - says Dr Żmihorski.

According to unofficial data, there are about 6 million cats in Poland. Only some of them are typically domestic cats that watch the world through the window. The rest are cats periodically or permanently staying outside - released outside, living near a house or feral. (PAP)