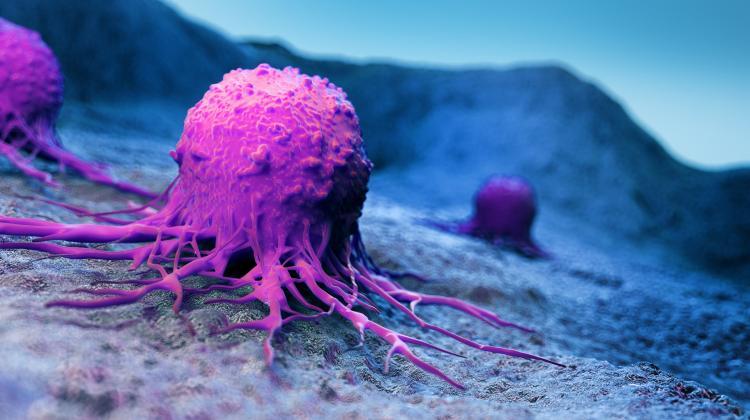 A gene called the `Achilles` heel` of colon cancer cells, which can kill cancer cells, has been discovered by scientists in Warsaw.

Researchers from the International Institute of Molecular and Cell Biology said that the discovery could improve the effectiveness of cancer treatment.

Scientists focused on two human genes VPS4A and VPS4B with a high degree of similarity (paralogs). VPS4 proteins are key to maintaining homeostasis (balance) in the cell, and at the same time as enzymes they represent a convenient therapeutic target.

Explaining their findings in the prestigious journal EMBO Molecular Medicine, the research team led by Ewelina Szymańska and Marta Miączyńska said that while genome rearrangements involving key genes for cell life or death are the driving force behind the transformation of a normal cell into a cancer cell, paradoxically, the same genetic changes can also lead to the emergence of the so-called `Achilles` heel`.

This happens, for example, when along with the removed chromosome fragment the X gene is lost, which in the correct cell cooperates with another gene Y in the course of processes important for the life of the cell.

Then the remaining Y gene becomes the `Achilles` heel` of the cancer cell, because its loss or inhibition of its product`s activity causes cell death.

This phenomenon, defined as synthetic lethality, is a promising approach for developing new targeted therapies in cancer treatment. Importantly, for the success of future therapies of this type, the key is to identify genes that mutate in cancer cells and their genetic partners with which they induce synthetic lethality.

By analysing publicly available data from the Cancer Genome Atlas, the team found that in many cancers, especially in colorectal cancer, the VPS4B gene is often lost along with a fragment of chromosome 18. These observations were confirmed by clinicians, who compared the level of VPS4B protein in tumour samples and in healthy intestinal tissues from patients.

These results indicate that tumour cells with reduced VPS4B protein levels are extremely sensitive to VPS4A protein dysfunction (Achilles` heel). In addition, the authors of the study found that cells dying due to the lack of both VPS4 proteins induce a strong inflammatory response, which in the body`s conditions can cause an anti-tumour reaction, which can potentially have an additional beneficial effect on the result of therapy.

The team`s findings are the foundation for future research to develop potential drugs for targeted cancer therapy, including colorectal cancer.

The research was conducted in cooperation with scientists and clinicians from the National Cancer Institute and the Nencki Institute of Experimental Biology in Warsaw.

The research was financed under the Sonata grant of the National Science Centre.