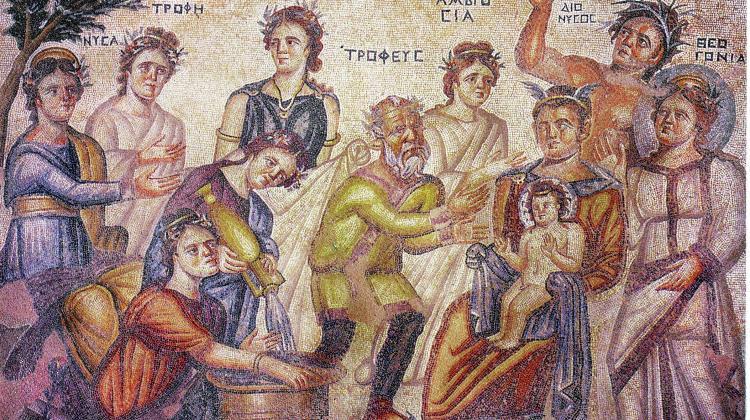 An ancient mosaic in a 4th century house in the centre of the ancient city of Paphos in Cyprus was a 'pictorial' criticism of Christianity, says a mosaic expert.

Dr. Marek T. Olszewski from the Faculty of Archaeology of the University of Warsaw believes that the mosaic was probably inspired by Neoplatonists,

a philosophical and religious movement in the 3rd and 4th centuries AD, which had many followers among the then elite who criticized followers of the new religion.

He said: “This mosaic is an illustrated anti-Christian polemic from the period of increasing domination of the followers of the Christian faith.”

He added that verbal polemics were particularly popular at the time and the 'pictorial' criticism of the principles of Christian theology contained in the mosaic consistent with a general trend.

Nea Paphos is one of the most important archaeological sites in Cyprus. During the Greco-Roman period, it was the capital of the island. It was founded in its western part at the end of the 4th century BC. Due to its importance, the site was inscribed on UNESCO's World Heritage List.

Numerous teams of archaeologists have been excavating in Nea Paphos for decades. Polish researchers started excavations in 1965. In 1983, a team of researchers led by Professor Wiktor Daszewski from the Polish Centre of Mediterranean Archaeology of the University of Warsaw discovered the ruins of a magnificent 4th century villa in a residential district. Researchers called it the House of Aion.

The explorers' attention was drawn to the extensive floor mosaic preserved in one of the rooms, most likely the dining room. This room was in an independent part of the house, most likely rented to a society. Its users used the facility regularly, entering through an independent entrance directly from the street. For many years, scientists have puzzled over the meaning of the mosaic.

In the days when the building existed, the Roman power and administration was rejecting the pagan religion and converting to Christianity. At that time, there were numerous confrontations and discussions between conservative followers of Roman religions and those who worshiped a monotheistic god.

The Paphos mosaic occupied 16 square meters in a three times larger room and originally consisted of five rectangular panels. They were decorated with the myths of the classical world. To this day, there are visible depictions of Leda with Zeus in the form of a swan, a scene from the myth in which Kassiopea, the queen of Ethiopia (and the mother of Andromeda), stands before the court of the gods, or a Dionysian procession, where the god is shown surrounded by maenads and satyrs, or a scene with a death sentence on Marsyas.

According to Dr. Olszewski, the structure of the mosaic is subject to several rules of the rhetorical art of the period. These are: allegory, analogy, personification and antithesis. For example, the panel showing Dionysus as a child on Hermes' lap is an antithesis of the famous image of Mary with the baby Jesus. Likewise, the panel where Marsyas is sentenced to death by Apollo is the antithesis of the scene when Pontius Pilate passes judgment on Christ.

He added that there are two more polemical mosaics in Syria from the 3rd and 4th centuries AD.