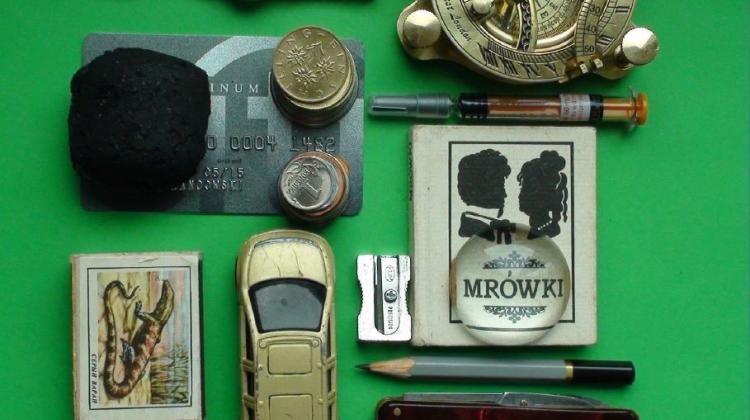 Time capsule buried by a Polish team of scientists in Hornsund and some of the objects that it contains. Photo: Prof. M. Lewandowski et al.

Fragment of a meteorite, fossils, plant seeds, human DNA, tardigrades, coins, photos of the Earth, silicon crystals - are the treasures buried by Polish scientists in a time capsule on Spitsbergen. The container is designed to appear on the surface of the Earth in about 500 thousand years.

Many times in history people have tried to communicate with other civilizations. In the 1970s, a radio message with information about humanity (Arecibo message) was broadcasted into space. Plaques with engraved information about the Earth and human figures (Pioneer plaques) were also sent to space.

Now researchers from eight scientific institutions in Poland and abroad have decided to send a "message in a bottle" not to beings distant in space, but very distant in time. On September 17th, the time capsule was placed in a 4 meters deep hole near the Polish Polar Station Hornsund on Spitsbergen and thoroughly buried to celebrate the 60th anniversary of the station. The capsule is made of thick stainless steel, has a length of 60 cm and a diameter of 12 cm.

Scientists estimate that as a result of the natural processes of erosion, the time capsule should appear again on the surface of the Earth in about 500 thousand years. Researchers expect that someone will find it. Maybe it will be the inhabitants of Earth, maybe visitors...

"This is the first such idea in the world" - commented the author of this initiative, Prof. Marek Lewandowski from the Institute of Geophysics of the Polish Academy of Sciences. The project description was released on September 28 on the Gondwana Research website (http://www.sciencedirect.com/science/article/pii/S1342937X17303106).

The capsule content is designed to provide as much information as possible about our civilization, natural environment and technological development. In the capsule there are five smaller stainless steel containers separated by magnetic pillows. "The universal language is the language of objects" - said Prof. Marek Lewandowski. Therefore, the containers contain artefacts and natural samples of minerals and rocks, as well as biological objects. Each container carries a message with a different theme: geological, environmental, biological, technological, as well as a set of objects from our everyday life.

Participant of the project, Dr. Monika Kusiak from the Institute of Geological Sciences PAS said: "In the geological part we wanted to show that we are able to determine the age, isotopic composition of rocks and minerals". She mentioned that placed in the container - in order from the oldest to the youngest - were objects including a fragment of a meteorite from Pułtusk, the age of which is estimated at 4.5 billion years - comparable to Earth\'s age. There are also zirconium grains from different parts of the world. They witnessed very early stages in the history of the Earth. Professor Lewandowski emphasised that geological samples (banded iron formations, trilobite, ammonite) are arranged stratigraphically, and each sample symbolizes the most important stages of the Earth\'s development. The youngest rock in the container is the modern Icelandic volcanic lava from the volcano that exploded in 2014. It would allow the finder to determine the age of the capsule delivery using isotopic dating.

In the capsule there is also a container related to the Hornsund area itself. It contains two memory cards with recorded photos and videos from the station. "Both cards contain the same recordings. The finder can even break the first card to understand how to read the second one" - he said. In the container there are photos embedded in ceramics, showing the Polish polar station in summer and covered with snow - in winter. "It will probably be interesting for the finder, because in the distant future there will not be snow near Hornsund anymore" - said Prof. Lewandowski. He adds that this would be due to the climate warming.

The biological part contains lyophilized DNA: human, rat, salmon and potato. "We owe a lot to rats as humans and - above all - as scientists" - commented Prof. Lewandowski. The capsule also contains tardigrades - invertebrates, which are able to survive even in extreme conditions. There are also seeds - including coffee, corn and sunflower. A place has also been found for ... human milk teeth. DNA in teeth is not damaged as easily as in other tissues.

The next container contains artefacts from which the finder will be able to draw conclusions about the state of our technology. They include a silicone crystal, accelerometers, a miniature photovoltaic panel and a diode for infrared radiation detection.

"If the finders fail to understand the content of these four containers, then maybe they will be interested in the last one" - said Prof. Lewandowski. It contains objects related to everyday life. These include matches, a syringe (according to the professor it is a symbol of modern medicine), coins from various countries, a watch, a car model, an ATM card, and even a miniature book and a tiny sundial with a compass. Glass prism and magnifying glass suggest that we know the properties of light.

Professor Lewandowski says that his idea has already attracted the attention of researchers who want to bury other time capsules with their messages for future generations in other places on Earth. "And if there are more buried capsules, that increases the chances that one of them will be found, unlike letters sent to space" - remarked Prof. Lewandowski.

Details of the project are available at https://timecapsule.igf.edu.pl/ (PAP)