Polish scientists in the hometown of Buddha 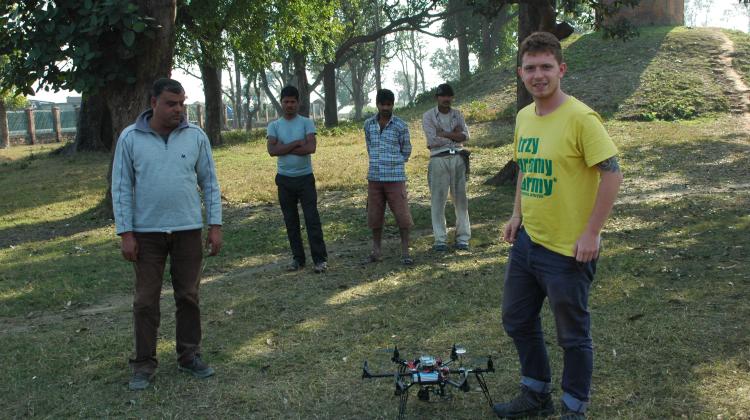 In the village Tilaurakot in Nepal, identified as Kapilavastu, the city where Buddha spent the first 29 years of his life, researchers from Poznań and Warsaw conducted reconnaissance using a drone.

Their work was part of the project "Assistance for the conservation and management of Lumbini, the birthplace of Buddha; phase 2: Archaeological research in Tilaurakot-Kapilavastu". The project under the auspices of UNESCO was led by Prof. Robin Coningham from the University of Durham and Kosh Acharya of the Pashupati Area Development Trust, in collaboration with the Nepalese Department of Archaeology and the Lumbini Development Trust. The project was financed by the Japanese funds.

"Our goal was to document at the archaeological landscape of places related to the life of the +earthly+ Buddha, Siddhartha" - explained in an interview with PAP Kasper Hanus, PhD student at the Institute of Prehistory, Adam Mickiewicz University in Poznań. The scientist worked in the field together with Wojciech Ostrowski from the Department of Photogrammetry, Remote Sensing and Spatial Information Systems, Warsaw University of Technology.

In addition to aerial reconnaissance, excavations were conducted in Tilaurakot by archaeologists from the UK and Nepal. Polish researcher participated in the excavations - Emilia Smagur, PhD student at the Institute of Archaeology of the Jagiellonian University in Kraków, who is on internship at the University of Durham under the National Science Centre scholarship Etiuda. The archaeologist, specializing in numismatics, participated in the discovery of the treasure of nearly 500 silver coins placed in a ceramic vessel. The researchers speculate that it was a foundation sacrifice made at the time of the temple construction. But it was only after cleaning the coins it will be known from which period they originate.

Researchers used a hexacopter (a drone with 6 rotors) to take photographs, which after processing were used to prepare orthophotomapa, i.e. the actual photographic maps of the area and numerical models of land - three-dimensional plans. The obtained data are still being analysed, but it is already known that the contribution to the exploration of the ancient metropolis will be significant.

"We have managed to locate elements of the archaeological landscape that surrounded this ancient city, mainly the moats, as well as stupas and iron smelting sites outside the city walls" - added Hanus.

The data collected in January and February by the Poles will also be used to better protect and manage cultural heritage, since both contemporary rural development and infrastructure facilities for pilgrims to this holy place, constantly threaten the archaeological site.

"Thanks to interdisciplinary cooperation we were able to prepare the studies, the accuracy of which is much higher than the data available in this part of the world. They can be used not only for archaeological purposes" - added Wojciech Ostrowski from Warsaw University of Technology.

The researchers have also performed reconnaissance in Aurorakot, an ancient fort only a dozen kilometres away, on which still very little is known because no excavations have been carried out within it. Polish researchers have created the first accurate topographic maps for the site. They have included the full, complex sequence of moats and walls. They have also created three-dimensional models for religious architecture at the site Kudan.