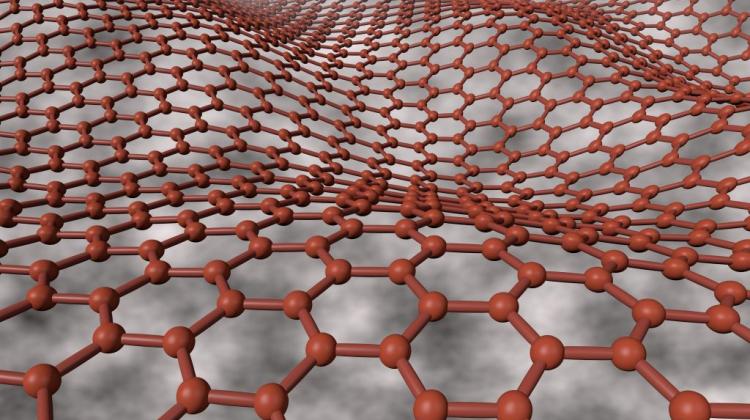 Graphene can destroy cancer cells - show scientists from Warsaw University of Life Sciences. Graphene attaches to the tumour cell and forms a thin layer around it, cutting off the supply of oxygen and nutrients, which leads to its death.

Graphene is a planar structure composed of a layer of carbon atoms. The thinnest of materials is 100-300 times harder than steel. As a great conductor of heat and electricity, it is a good material for applications in electronics, e.g. for the production of thin, flexible and durable displays or fast processing circuits.

Researchers from SGGW-WULS in Warsaw are investigating the biological properties of graphene and check whether it can inhibit the growth of human cancer cells. Prof. Ewa Sawosz Chwalibóg with a team of young scientists: Dr. Marta Grodzik, Sławomir Jaworski , Marta Kutwin and Mateusz Wierzbicki are working on glioma cells (cancer of the central nervous system).

" We already know that graphene attaches the tumour cells or tissue fragments and thus acts on cell receptors, transport of nutrients and oxygen to the inside. This is probably initiates the process of apoptosis, cell death" - told PAP Prof. Ewa Sawosz Chwalibóg.

Carbon - she explained - is a quite friendly element, and not very toxic for human tissue. "Graphene made of carbon atoms forms around the tumour cell a thin, an almost impermeable layer, which is relatively stable in the human body and one only atom thick. Consequently, it can isolate the cell from the external environment" - she explained.

"So far the results are amazing. Graphene administered to the tumour causes its significant reduction" - admitted Prof. Sawosz Chwalibóg. In the case of some glioma cell lines, graphene induces apoptosis of most cells. In others, this type of cell death occurs in 70-80 percent cells and is accompanied by adverse reaction, necrotic cell death.

"This means that the cell has been destroyed , but unfortunately not completely, which promotes the development of the inflammatory response. Various types of glioma cells respond differently to graphene. This confirms that cancer treatment should be personalized, because each body may respond differently to the treatment" - she said.

Researchers believe that the method could also be used in the treatment of other types of cancer. "This method is quite universal in the sense that graphene - colloquially speaking - will stick to a cell, isolate it from the environment, and stimulate its death in the same way" - she explained. Unlike chemical substances, graphene will not dissolve in water or physiological fluids. It will remain in the point where it was administered, so it will not have damaging effect on other tissues.

Prof. Sawosz Chwalibóg emphasised that graphene not only kills cancer cells, but can also be an excellent carrier of other substances. "It is relatively easy to attach to it other active compounds such as medicines, nutrients, minerals cells need, enzymes needed for a particular disease. In such cases, a complex of graphene and attached compounds may be administered. Graphene, attached to a cell or tissue region, will be the source of these substances and - even in small concentrations - will cause the death of a number of cells" - described the scientist.

Scientists from SGGW-WULS carry out their research on human glioma cell lines and tumours grown from these cells. The cells are placed on a growing chicken embryo in an egg, and after only a few days a real human glioma tumour develops. This unique method, initiated by Dr. Marta Grodzik, allows to easily monitor the step by step development of natural human tumour.

"At the moment, only biological tests on animals are being conducted, so it is difficult to say when the method of killing cancer cells with graphene can be applied in practice. We are only exploring the biological mechanisms, the next step - clinical trials - should be taken by doctors" - emphasised Prof. Sawosz Chwalibóg.