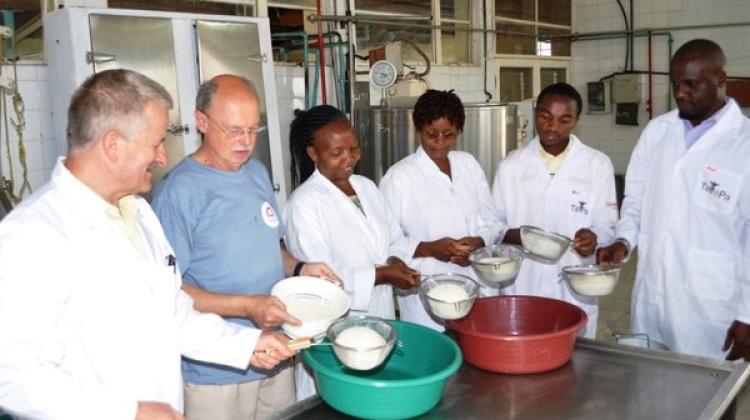 Researchers from Warsaw University of Life Sciences have taught the residents of Tengeru, Tanzania the cheese production technology. The product named Tangaru cheese was made using the combination of Tilsit cheese and oscypek technologies.

Tengeru is a small town in north-eastern Tanzania. It has an horticultural institute and a small dairy built in the 1960s. Researchers from Warsaw University of Life Sciences (SGGW-WULS) decided to teach cheese production technology to the local people. Information about this project appeared on the university website.

In Tanzania, a relatively small amount of milk is used for cheese making - most of the obtained milk is sold directly to residents, and the rest is processed into curd, butter and yoghurt using simple methods. Therefore, researchers from SGGW-WULS proposed a simple method for the production of cheese.

The product named Tangaru cheese was made by combining the Tilsit cheese and oscypek technologies. It is a ripened, semi-hard or hard cheese. It can be produced even in very difficult conditions in Africa. It is ready to eat after one week, packed and smoked it can be stored in a refrigerator for several months. The technique of its production is so simple that it can be adapted by the local farmers. That is what Polish researchers trained them to do.

Dr. Antoni Pluta, professor at the Faculty of Food Sciences, Warsaw University of Life Sciences and Dr. Andrzej Janicki from the Faculty of Human Nutrition and Consumer Sciences travelled to Tanzania. The scientists are involved in the volunteer program Polish Aid. It is organized and financed by the Ministry of Foreign Affairs as part of the Foundation for the Development led by Dr. Wiesław Ptach, also an employee of Warsaw University of Life Sciences.

Scientists declare their desire to return to Tanzania. Next time they want to run the old dairy equipment, capable of processing several hundred litres of milk per day, and use it to make gouda or mozzarella type cheese. To make it profitable, more raw material would be needed. Scientists are hoping that training local people in the evaluation of milk would help, as would buying milk from the local population.