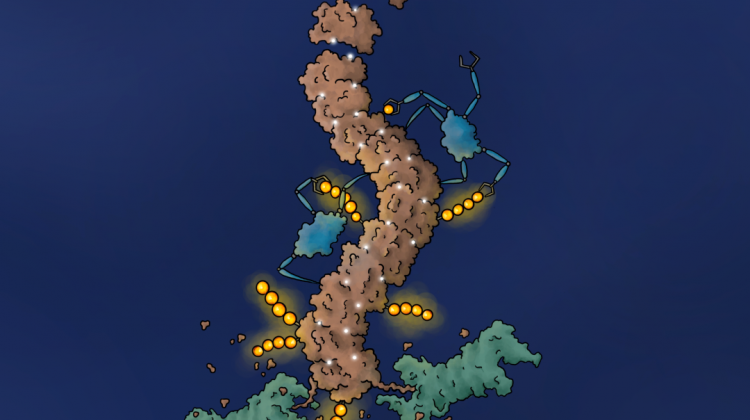 A chemical induces the polymerisation of the BLC6 protein. Credit: Jonas Koeppel

Malfunctioning BCL6 protein is responsible for the development of lymphomas.

A team of Polish and international scientists has discovered a mechanism of eliminating a pathogenic protein, using a chemical compound that causes harmful proteins to form a long polymer chain, which is quickly degraded.

BCL6 is one of the countless proteins in the human body and is crucial in differentiating blood cells and regulating many other proteins. Too much BCL6 may initiate the neoplastic process and cause the development of tumours of the lymphatic system, for example lymphomas. Studies in cell and animal models of lymphoma have shown that inactivation of this protein leads to remission.

For many years, attempts have been made to develop a drug that would lower the level of the 'bad' BCL6, but the compounds were not sufficiently effective.

Mikołaj Słabicki from the Broad Institute of MIT and Harvard in Cambridge, Dana-Farber Cancer Institute in Boston, USA and the German Cancer Research Centre in Heidelberg said: “The problem is that currently a large part of cancer drugs are so-called inhibitors that block specific functions of proteins. Unfortunately, only some pathogenic proteins react to their action. BCL6 is not one of them.”

In the laboratory where he works, researchers are looking for new methods to neutralize those pathogenic proteins, the blocking of which with classic inhibitors is ineffective or even impossible. Such drugs already exist, they act, for example, as 'molecular adhesives', degraders binding the malfunctioning protein with another protein (called ubiquitin ligase), which makes them harmless. These include Lenalidomide, used, for example, in the treatment of multiple myeloma, as well as the compound CR8.

Three years ago, while looking for a substance that would block the action of the BCL6 protein, the pharmaceutical company Boehringer Ingelheim analysed almost 2 million chemical compounds in its resources. One of the identified compounds was an extremely effective BCL6 protein degrader. This tiny molecule initiates the BCL6 destruction process, causing specific cancer cell death. But the exact mechanism of this process was not known, making it difficult to refine the compound for use in potential therapies.

The researchers led by Professor Benjamin Ebert and Professor Eric Fischer of the Dana-Farber Cancer Institute searched for an explanation. They managed to explain the previously mysterious mechanism, and its description was published by the prestigious journal Nature. The main authors of the paper are: Mikołaj Słabicki, Hojong Yoon, Jonas Koeppel.

To trace what happens to the BCL6 protein after administration of the degrader compound, scientists labelled it with a fluorescent protein that allowed to observe it in cells. Thanks to this, they noticed that the degrader caused the formation of aggregates (cell clusters) of BLC6, which disappeared after several dozen minutes.

Co-author of the research, Radosław Nowak from the Dana-Farber Cancer Institute in Boston, said: “During the study of these aggregates, it turned out that the BCL6 protein under the influence of the degrader first underwent the polymerisation process, its successive molecules formed a long polymer chain.”

Researchers also identified the last piece of the puzzle: they discovered a ubiquitin ligase (called SIAH1) that efficiently destroyed the polymerised BCL6 protein.

Co-author Mikołaj Słabicki said: “We have never looked for drugs that would polymerise malfunctioning proteins. Now we know that this is possible. We hope that the same method can be used to get rid of other proteins, the deregulation of which may lead to cancer formation.’