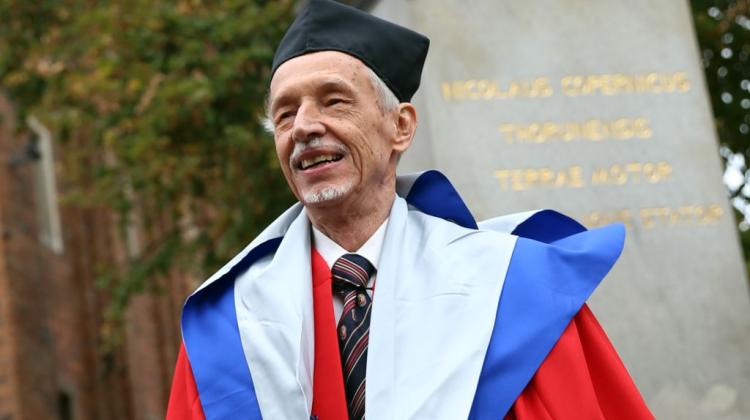 The university senate awarded honorary doctorate to Prof. Koerner "in recognition of the creator of historiography of linguistics and his contribution to the Polish linguistics". The presentation of the award took place during the inauguration of the new academic year.

Prof. Koerner was born in 1939 in Mlewiec near Toruń in a German family that had contributed greatly to the history of Toruń; in 1919 the family took Polish citizenship. In 1945 the family moved to Germany. His father served in the Polish cavalry, and great-grandfather Theodor Eduard Koerner was the mayor of Toruń in the years 1842-1871 and one of the initiators of the construction of the Copernicus monument in the Toruń Town Square.

The scholar studied at the universities in Göttingen, Berlin, Edinburgh and Giessen and received his doctorate in Vancouver. He worked at the University of Ottawa for 25 years, and after his retirement he moved to Berlin and became associated with Zentrum fuer Allgemeine Sprachwissenschaft.

Prof. Koerner is a distinguished linguist and historian of linguistics. Among his numerous scientific papers, translated into many languages, was a multi-volume history of linguistics, covering the times from the Sumerian culture to the present day. He published hundreds of translations, studies and critical editions presenting the world achievements of linguistics.

A separate area of interest of Prof. Koerner is Polish linguistics; he has made an invaluable contribution to its popularisation in the world science. He has worked with the Faculty of Languages of Nicolaus Copernicus University for many years, in 2000 he established the Theodor Koerner Scientific Research Fund awarding grants for students and employees of Nicolaus Copernicus University, which have benefited 22 people since 2000.

The inauguration of the academic year at NCU was attended by Deputy Prime Minister, Minister of Science and Higher Education Jarosław Gowin, as well as many MPs including Deputy Speaker of the Senate Maria Koc and leader of .Nowoczesna, Ryszard Petru.