Researchers at the Nicolaus Copernicus University are searching for dark matter 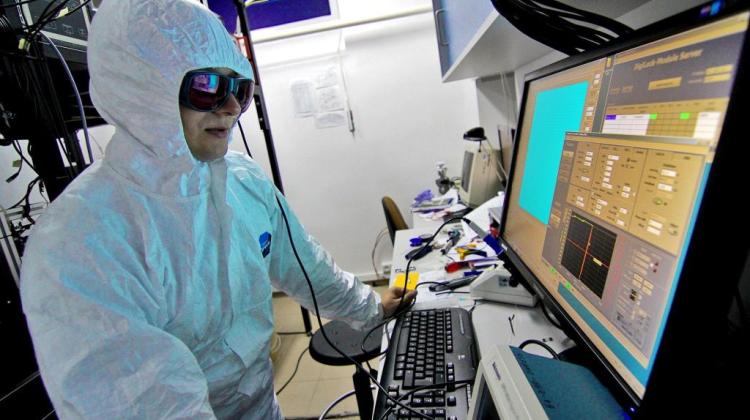 Physicists from the Nicolaus Copernicus University (UMK) in Toruń conducted laboratory search for dark matter. For the first time they experimentally used optical atomic clocks for this purpose. The study has been published in the journal "Nature Astronomy".

Dark matter is a mysterious component of the Universe, whose properties physicists and astronomers are trying to understand. Dr. Piotr Wcisło from the Nicolaus Copernicus University, the first author of the paper, explained that so far the physical effects that suggest the existence of dark matter have only been observed in the galactic scale. Explaining the observed motion of bodies in the galaxies or characteristic refraction (gravitational lensing) of the light that reaches the Earth, would require much stronger gravitational interaction than the one the source of which was visible matter.

"Observation of dark matter in the lab would be a real breakthrough" - said the Polish scientist.

Physicists from Toruń managed to use a tool allowing to search for dark matter and make measurements showing that if dark matter actually did exist, it would not interact with ordinary matter more than a specific value. The tool was an optical atomic clock.

We know from astronomical observations that there is several times more dark matter than the matter we know from everyday life. Dark matter is invisible, and the only way in which we infer its existence, are the observations of the effects of its gravitational effects on ordinary matter. There are several hypotheses trying to explain this state of affairs. For example, researchers are looking for elementary particles that could be responsible for dark matter. Another idea is to correct the theory of gravity to include a correction factor in the relationship between the force of gravity and distance (so-called theories of modified gravity).

Polish scientists have tested yet another hypothesis, according to which there might be macroscopic objects of dark matter, so-called topological defects. They could arise in the early, quickly cooling down universe. This defect can be visualized as a wall of unknown thickness, which "flies" through the universe.

"If such an object would travel through the National Laboratory of Atomic, Molecular and Optical Physics (FAMO), and if somehow couple with the standard matter that we know, at this point the most sensitive equipment in the world, which is an optical atomic clock, would starts to >tick< a bit differently" - explained Dr. Wcisło.

World physicists considered this kind of experimental before, but it was assumed that for the measurements, in addition to the primary atomic clock, one would needed another reference clock in a very remote location. This would require a fibre optics connection for example between Poland and Japan.

Dr. Wcisło came up with another idea that allowed to use only one atomic clock. It turns out that the frequency reference standard could be not only ultracold atoms, but also an optical cavity - one of the standard components of the atomic clock. Frequency of light absorbed by the atoms and passing through the cavity will react differently to a meeting with the sought-after object. Its presence will manifest as the difference between the two frequencies.

Prof. Roman Ciuryło from the Nicolaus Copernicus University noted that atomic clocks using ultracold atoms and optical cavities had been known for years, but so far experimenters did not see this potential. Simple connection of facts, as in the case of the experiment of the Toruń group, has led to interesting consequences.

A new method of searching for dark matter allows to set further restrictions on the properties of dark matter. This will allows to check and reject wrong hypotheses. But the method potentially also allows to actually detect dark matter. In addition, it is very cost-effective: there is no need to build special, expensive laboratories, because the data in the experiment are obtained from an existing device, built for other scientific purposes.

"The fact that today we can test these ideas, is the fruit of the efforts of the Polish community of scientists involved in atomic, molecular and optical physics taken since the beginning of this century. The establishment of the National Laboratory FAMO in Poland allowed to develop ultra-modern technologies and the branches of physics, whose achievements have allowed to build the Polish Optical Atomic Clock. This, in turn, gave the opportunity to tackle one of the most fascinating mysteries of the Universe" - emphasised Prof. Ciuryło.