The mummy of a man from the National Museum in Warsaw turned out to be... a woman 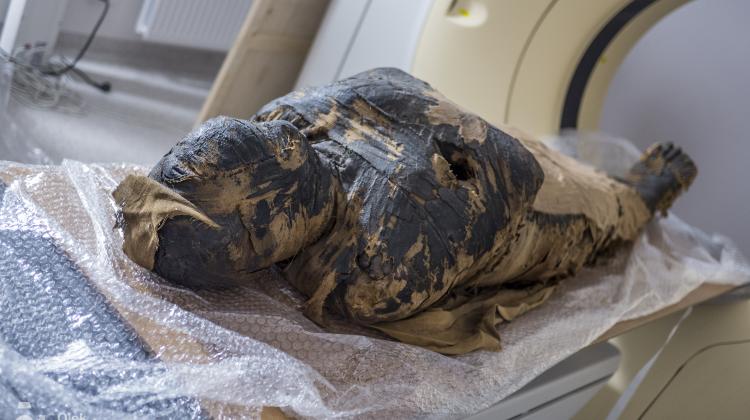 The mummy of the priest Hor-Djehuti, which is in the collection of the National Museum in Warsaw, hides a woman\'s body under the bandages. Polish scientists announced the unusual discovery on August 11 at the World Congress on Mummy Studies in Lima, Peru.

The discovery was made in the comprehensive, interdisciplinary Warsaw Mummy Project. Its authors are Polish archaeologists and bioarchaeologists, PhD students at the University of Warsaw: Wojciech Ejsmond, Marzena Ożarek-Szilke and Kamila Braulińska. Braulińska, who delivered a speech in Lima, is the main coordinator of the project.

"A CT scan showed that the skeleton of the alleged priest has a very delicate constitution, which is quite unusual for a man. It was the first signal that we were not dealing with a person referred to by the inscription on the coffin, in which the deceased had been placed" - explained in an interview with PAP Marzena Ożarek-Szilke, archaeologist and physical anthropologist.

Further, more detailed analyses convinced scientists that it was indeed a woman under the bandages. One of the things they noticed on the tomographic images was the lack of... penis. "The Egyptians mummified this organ. It is usually well preserved" - added Ożarek-Szilke.

The researchers performed a three-dimensional reconstruction of the body of the dead woman. This was possible without unwrapping the mummy, through tomographic technology.

"On the obtained 3D images clearly visible are long, curly hair flowing down to her shoulders, and mummified breasts" - described the anthropologist.

The researchers measured the bones seen on CT images. Anthropological measurements also confirm the assumption that the alleged mummy of Hor-Djehuti is a woman. According to Ożarek-Szilke, small diameter of the femoral head indicates that.

Based on the analysis of the hieroglyphic inscriptions on the sarcophagus it was previously thought that it was the mummy of a man. According to the website of the National Museum, where it is stored, Hor-Djehuti was the city writer and manager in the area of Medinet Habu in Western Thebes, and a priest of Horus-Thoth, a local saint worshipped in the Greco-Roman period. The priest lived in the 1st half of the 1st century AD.

"As a result of recent research we need to change the identification of the deceased. Initially we suspect that the mummy come from an earlier period than previously thought" - said archaeologist Kamila Braulińska.

According to the researchers, the fact that the mummy is better preserved indicates that it is older than previously thought. This seems illogical, because the older finds should be in a worse condition. Ożarek-Szilke explained that in the case of mummification, at the end of the Egyptian civilization, approx. 2 thousand years ago, the mummy preparation technique was less refined. "That\'s why they decomposed faster" - she added.

The researchers have not been able to determine the cause of death yet. It is known that the women was young - she died at the age of 20-30 years.

The mummy was brought to Poland in the nineteenth century. "We believe that Stanisław Kostka Potocki - Minister of Education, who actively supported the creation of collection of antiquities in the emerging University of Warsaw contributed to that" - said Wojciech Ejsmond from the Antiquity of Southeastern Europe Research Centre of the University of Warsaw. The contemporary Warsaw newspapers reported that the mummy had been "excavated from royal tombs of Thebes". Currently, researchers are sceptical about this information.

Ejsmond added that for a long time it had been believed that inside the coffin was a "mummy of a woman". This information appeared in the nineteenth-century list of relics in the antiquities collection of the University of Warsaw. Only in the interwar period scientists deciphered hieroglyphics on the coffin, which clearly indicated its owner - the priest Hor-Djehuti. Thus, it was concluded that the coffin contains the remains of this man. Only during recent study it was determined that it was a woman after all.

Since 1919, the mummy, belonging to the University of Warsaw, is in a long-term deposit at the National Museum in Warsaw. Together with the sarcophagus it will be presented in the re-arranged permanent Gallery of Ancient Art. "Obviously with a new signature" - noted Ożarek-Szilke.

The Warsaw Mummy Project is implemented in close cooperation with the National Museum in Warsaw, under the care of which are all tested mummies. It is the largest in the world interdisciplinary academic initiative devoted to the studies of ancient mummies.

Affidea Polska has provided testing equipment for the archaeologists. A trip to the World Congress on Mummy Studies in Lima was possible with financial support from the Advisory Council of the Student Research Movement of the University of Warsaw and the UW Foundation.