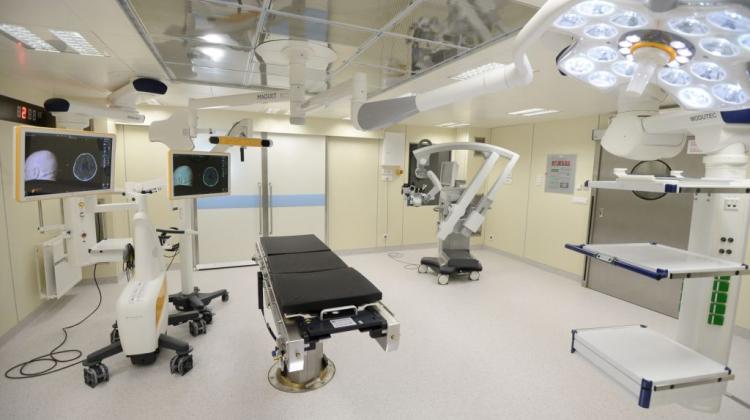 First in Europe and second in the world Interventional Neurology Center (INC) opened in the Department of Neurological Surgery of Bródno Hospital in Warsaw. Doctors at the Centre will perform extremely precise brain surgery operations with "live" imaging.

The only other such facility exists at the University of California at San Francisco, where Polish neurosurgeon Prof. Krzysztof Bankiewicz works. Sister facility of the INC has been established as a result of his efforts, with grants mainly from the European Regional Development Fund.

Bródno Hospital VP Wiesław Malicki said that the Interventional Neurology Center had been equipped with the most advanced hybrid room in Europe. It will be used to perform various types of treatments and diagnostic tests. Patients will come from across our continent, and specialists from around the world will operate and treat them.

"This is an important event for both our hospital and world of neurosurgery" - emphasised the Chairwoman of the Board of Bródno Hospital, Teresa Maria Bogiel. The cost of this innovative project exceeded 24 million zlotys. 20.5 million zlotys were EU funds allocated under the Regional Operational Programme of the Masovian Voivodeship 2007-2013.

Head of the Department of Neurological Surgery of Bródno Hospital Prof. Mirosław Ząbek explained that the most important piece of the hybrid room equipment is the latest generation MRI 3.0 Tesla that allows to perform operations in real time. As a result, neurological surgery procedures can be performed with even greater precision.

"Until now, traditional neuronavigation was used in neurosurgery" - said Prof. Ząbek. In this method, brain imaging of the patient using magnetic resonance imaging and computer tomography is performed a few hours before the treatment. Then it is uploaded into a neuronavigation system which guides the neurosurgeons to the place in the brain on which they want to operate.

The latest method is the intraoperative neuronavigation that allows to perform procedures in real time. Prof. Ząbek explained that they are carried out in a magnetic field, obtained with 3.0 Tesla MRI. Increased accuracy allows to establish the operation field to the nearest 1 mm.

"MRI used in these operations is also the operating theatre. The patient is there alone, inserted into the device in anesthesia. Surgeons and the whole team are outside, at the back, and watch the operated place on the monitor" - emphasised Prof. Ząbek.

Surgical instruments are controlled remotely like in operating theatres, which use surgical robots. Since the instruments are in a strong magnetic field, high-speed drills, TREPs and suction pumps, infusion pumps and lancets can not be made of metal but non-magnetic materials.

Prof. Ząbek wants to use intraoperative neuronavigation for gene therapy, which can be helpful in the treatment of Parkinson\'s disease. It is essential to perform the operation in real time because it requires great precision.

"In order to achieve a therapeutic effect, we must introduce viruses containing the appropriate DNA fragment precisely into a specific region of the brain" - said prof. Ząbek. They build into brain cells and produce neurotransmitter, the deficiency of which causes Parkinson\'s disease. However, it must be produced exactly where it is needed.

The first such operations were performed in San Francisco by Prof. Krzysztof Bankiewicz, a graduate of the Medical Academy in Kraków. The specialist has been working for over 20 years with one of the most famous neurosurgeons in our country, Prof. Ząbek.

Prof. Ząbek believes that gene therapy can be used to cure all diseases of the brain, which are caused by a substance deficiency. One of them may be Huntington\'s disease caused by mutations in the gene IT15. Its effect is too high level of glutamine in the protein called huntingtin, causing havoc in the human central nervous system.

The specialist believes that the operations in real time could also be used for precision surgical removal of brain tumours. Nanoparticles with anticancer activity can also be introduced directly to the brain.

"The progress in modern medicine is so large that today we can effectively to treat people who not so long ago would die" - said Speaker of the Senate Witold Karczewski during the opening ceremony.