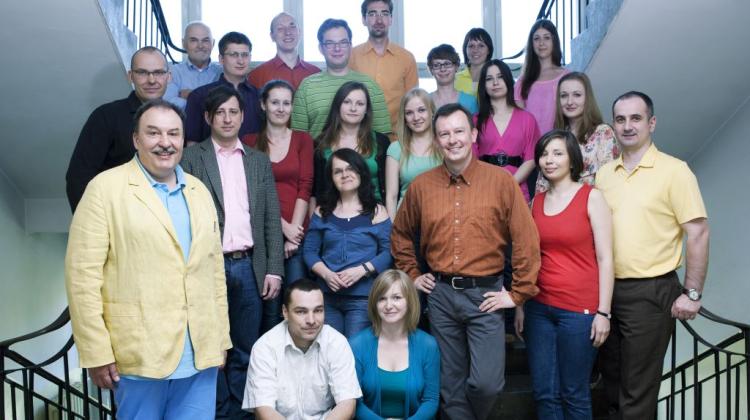 Prof. Wiesław I. Gruszecki with his team. Photo: One HD

The team of prof. Wieslaw Gruszecki of the University in Lublin broke the world record for infrared microscopy resolution, and discovered a new method of molecular imaging. The results have been published in journals "Nanoscale" and "Analytical Chemistry".

The study described in the "Nanoscale" concerns microscopic imaging of samples based on the phenomenon of absorption of radiation from the infrared range (IR). Resolution of conventional infrared microscopic imaging methods reaches only a few micrometers (millionths of a meter), which corresponds to the dimensions of a typical bacteria. Recent years have seen great progress in IR microscopy, in connection with the development of microscope system called "nano-IR". It has enabled the achievement of IR imaging resolution of about 100 nanometers (billionths of a meter). 100 nm is slightly less than the diameter of the HIV virus.

The team of Prof. Gruszecki in collaboration with physicists from the Swiss Federal Institute of Technology in Lausanne (EPFL), made a successful attempt to beat the record - they manaded to move the resolution threshold to approximately 10nm (this is, for example, the diameter of the smallest particles of tobacco smoke). Laser pulses heat the sample, which translates into a difference of positioning of the scanning cantilever. Laser light reflected by the cantilever is subject to changes, from which the image can be read.

The achievement of such a high resolution was possible with to the development of special samples composed of two components (lipids and proteins) that differ significantly in thermal conductivity and high infrared absorption by the complex that is integrated perpendicular to the plane of the sample.

The second achievement, published in the journal Analytical Chemistry, is related to the discovery of the molecular imaging method based on photo-thermal effect. The new technique was named Photo-Thermal Imaging Microscopy (PTIM) by the authors. It allows imaging molecular objects at the nanoscale, based on the heat they emit. This method can be used in the study of biological samples, as well as in materials science.

"In the course of conducting research we often encounter barriers that significantly limit its progress. In many cases, these barriers arise from the limitations of experimental techniques themselves. It also happens that researchers make modifications to these methods "by the way", and even discover and propose new research techniques. The history of great science, as well as everyday laboratory practice, knows many such situations. It seems that our recent results fall in this category" - said Prof. Gruszecki.