Hansel and Gretel - a good story without a happy end 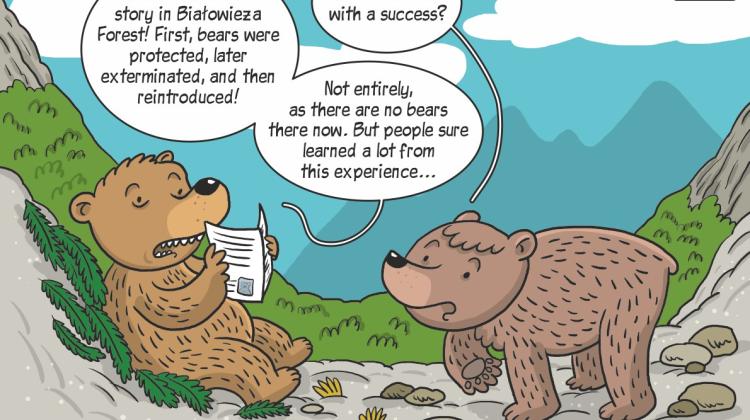 The world`s first reintroduction of a large predator - motivated by ecological goals, and successful in some respects - took place in the Białowieża Forest. Scientists from the centres in Białowieża, Kraków, Paris and St. Petersburg remind about this pioneering project.

Conclusions from the study of historical sources concerning bear reintroductions have been published in Conservation Biology. The authors of the paper are: Tomasz Samojlik and Dries Kuijper from the Mammal Research Institute PAS in Białowieża, Nuria Selva from the Institute of Nature Conservation PAS in Kraków, Piotr Daszkiewicz from the Natural History Museum in Paris, Anastasia Fedotova from the Russian Academy of Sciences in St. Petersburg and Adam Wajrak, naturalist and journalist.

Reintroduction took place shortly before the outbreak of World War II. The lead author of the publication Dr. Tomasz Samojlik emphasises that its importance can be appreciated only in the context of earlier events related to the natural history of the Białowieża Forest and human interference in its area. This includes the Russian attempts to introduce modern forest and hunting economy in the forest in the 19th century.

Earlier, in the royal era, the Białowieża Forest had the status of a royal hunting reserve, and the predators living the forest had quite a good life. "The bear was under special care, it belonged to the so-called animalia superiora group - animals reserved for royal hunting. However, after the forest came under the tsar`s rule, it immediately became the main target of attacks - mainly because it was considered the main enemy of the bison" - Dr. Samojlik reminds.

He adds that the reason for the changes was the Russians` obsession with German forest management principles. According to those, predators were the worst thing that could happen in a man-managed forest; they should be fought by any possible means.

According to the scientist from the Mammal Research Institute PAS, "bringing +order+ to the forest was a point of honour for Russian foresters and administrators. Early 19th century descriptions of visits of tsar`s envoys, whose task was to inspect the Białowieża Forest and assess its suitability for forest management, were full of terror: the forest was uncivilized, run down and cluttered with dead wood".

"Civilising" the forest in the 19th century in practice meant, among other things, exterminating predators - wolves, lynxes, foxes, martens, weasels, even birds of prey. "Various methods were used: from hunting through poisons to rewarding the locals for combating predators. As a result, the last bear was killed in the Białowieża Forest in 1879. Paradoxically, though bears were exterminated under the slogan of protecting the bison - those also died out in the forest 40 years after the bears" - he says.

The authors of the publication in "Conservation Biology" remind that after Poland regained independence and authority over the Białowieża Forest, and after ascertaining the extinction of the bison in the wild, an idea to restore the bison quickly appeared. The International Society for the Protection of the Bison was established, and the bison from various farms were brought to the forest, with a huge effort of the entire Europe.

That was in 1929. When the bison reintroduction program began to gain momentum, a new idea emerged: if the bison returned to the forest, its main predator, the bear, should also be restored. The original author of this idea is unknown. It is known, however, that the project was realized by the first director of the Białowieża National Park, Jan Jerzy Karpiński.

Dr Samojlik emphasizes that it was the world`s first reintroduction of a large predator, the goal of which was increasing biodiversity and restoring natural mechanisms in the ecosystem. "There had been earlier attempts to reintroduce or introduce various predators - but only as game animals. In the case of Białowieża bears, however, hunting was not the goal. The idea was rather to restore the natural enemy of the bison in the forest, and the process of natural selection" - he emphasises.

The brilliant plan was realised in 1937, says Dr. Samojlik. A pregnant female from a zoological garden was brought to the Białowieża Forest in a special cage. It was clear that she was unfit to live in the wild. However, naturalists invented a clever method, thanks to which her children would be born in the forest and learn to live independently.

"All this took place in the heart of the Białowieża National Park. The cubs that were born there - Jaś and Małgosia (Hansel and Gretel) - were able to leave the cage and explore their surroundings, no one had access to them except the bear guards, specially designated people who looked after these bears, but refrained from getting in contact with them. When the cubs grew up and could feed themselves, the bars in the cage - previously bent - were straightened up again, and the young bears quickly began an independent life" - says the scientist from the Mammal Research Institute PAS.

He emphasises that this was the world`s first animal reintroduction with the method known today as "born to be free", which allows animals to get used to living in the wild without human interference.

Dr Samojlik reminds that there were simultaneous attempts to restore bears in the Białowieża Forest by other means. This involved bringing captive animals (probably purchased in Belarus) to the forest and attempting to acclimatize them. "This, however, was completely unsuccessful. The bears born in captivity could not imagine getting their own food. When they encountered humans and felt the proximity of their homes, they began to come and beg... Unfortunately, there was no education - the locals had not been informed that the bears should have absolutely no contact with people. And when people saw these cubs, amusing balls of fur, they stroked and fed them. After they grew up and started to be dangerous, people stopped feeding them. The bears used to being fed began to cause trouble. Attacks on humans started, some of the bears fell victim to poachers, others had to be caught. Only one of the bears born in captivity got used to living in the wild" - he says.

This problem did not concern Jaś and Małgosia. They avoided human beings like other wild bears, and probably even reproduced. "This story had a great chance for a happy ending, but it ended sadly. The outbreak of World War II brought the end of the bear reintroduction program, which was beginning to take off ... The Germans, who occupied the area, transformed it into Hermann Goering`s hunting reserve and realized their own vision of restoring the +Primeval Forest+ by releasing Heck cattle and circus bears, the latter known for their attacks on people" - says Dr. Samojlik. After the war, bears were still seen in the Forest for several years. There were certainly young bears among them, possibly the offspring of Jaś and Małgosia. The last traces of bear presence were found in the Polish part of the forest in 1947, and in the Belarussian part in 1950" - says Dr. Samojlik.

"The only thing remaining after this initiative is the memory of the world`s first, and - as we argue - at least partially successful large predator reintroduction project. And it was successful, considering that the wild bears survived here for 13 years and managed to reproduce in the wild" - the scientist notes in an interview with PAP.

He mentions that the story of reintroducing the pair of bears is more complicated than a story of a failed nature conservation project: "If it were not for the World War II, the bear could continue to live in the forest and fit perfectly into the environment".

Dr. Samojlik emphasizes that the "born to be free" method applied in the case of Jaś and Małgosia is now routinely used when restoring predators to the environment. But modern papers on the reintroduction of large predators usually fail to mention the Białowieża Forest. "We believe that this story deserves a mention, as the world`s first attempt to introduce a large predator to the environment in which it existed before, motivated ecologically, and not implemented for hunting purposes" - he says. In addition, Białowieża experience can be used as a valuable lesson for contemporary projects of this type.

The authors of the publication searched for information about the reintroduction in Russian publications and historical archives in St. Petersburg and Moscow. Dr. Samojlik notes that although the main outline of this story had been known earlier, comparing it with similar attempts to reintroduce large predators gave it a proper context.

Currently, there are no bears in the Białowieża Forest, although there are occasional reports concerning tracks left by bear travellers from Belarus. Although the strict nature reserve of the Białowieża National Park is large enough for a pair of bears to live, a natural return of these animals to the forest is unlikely. "The visiting animals are wandering males that will not stay here for a trivial reason - they would not find a female" - says Dr. Samojlik.

The authors of the publication do not discuss the possibility of reintroducing bears to the contemporary forest. But they point to the lessons that can be learned from the Białowieża experience from almost a century ago. "Firstly, when reintroducing predators, one should absolutely avoid releasing captive animals, because every contact with humans is a potential threat" - notes the researcher.

Secondly - he adds - "we argue that educating the local population is crucial. If the locals knew that wild animals should not be treated as domesticated ones and fed - perhaps many conflicts between bears and people could be avoided. It is also confirmed that every conflict, every period of chaos caused by people destroys even the best reintroduction plans and other activities related to nature conservation".