Scientists have been using advanced computer microtomography to look into the heads of yellow ants’-nest beetles to discover how they differ to their ancestors.

The scientists were curious to find out why the little beetles known as Claviger testaceus cannot survive without an ant colony, although its distant, predatory ancestors lived much more freely.

In the Eocene (a geological epoch that lasted about 22 million years and ended about 33.9 million years ago - PAP) ants dominated the terrestrial environments.

They became some of the few animals called ecosystem engineers, capable of significantly rebuilding their environment and influencing the fate of its other inhabitants. Over the course of the last 40 million years of evolution, all other invertebrates of the forest floor, as well as those related to vegetation up to the crowns of trees, had to deal with aggressive, abundant in numbers and extremely flexible ants.

Dr. Paweł Jałoszyński from the Natural History Museum of the University of Wrocław said: “This coexistence, and associated predation and competition, changed the course of the evolution of many groups of insects whose morphology, behaviour and physiology had to cope with pressure from the ants. Thus a great variety of new adaptations have arisen, and the ubiquitous ants continue to have a tremendous influence on life on Earth.”

The development of social behaviour, caste specialization and life in large colonies helped ants achieve today's diversity of species and body forms. The emergence of communities, in which workers maintain stable conditions, gather food and organize dumpsters for the waste they produce, attracted a large number of other insects to ant nests. Myrmecophiles, organisms more or less associated with ant colonies, use these resources as well as the protection provided by the safe interior of the nest and the soldiers guarding it. But free-living species had to solve a large number of problems in order to adapt to life with ants. Even entering a closely guarded colony may result in death; living among aggressive hosts was far from idyllic; and the food inside the nest is not only guarded, but also precisely rationed by specialized workers.

Despite these difficulties, many myrmecophiles are so perfectly adapted to living in ant colonies that today they cannot survive on their own, without their hosts. One of the examples of the most extreme adaptations is the yellow ants'-nest beetle (Claviger testaceus) from the Staphylinidae family. These tiny beetles, with a body length of about 2 mm, are among the most mysterious European beetles. These insects are completely blind and wingless. They are also unable to feed themselves. They manipulate the ants in such a way that workers feed them and move them to new places. But no one has ever found a yellow ants'-nest beetle larva, despite almost two hundred years of efforts... We do not know anything about their development cycle.

Despite many studies, so far it has only been established that yellow ants'-nest beetles secrete chemical compounds from their glands that force ants to look after the beetles; liquid food passes 'from mouth to mouth', and in case of danger the workers protect their roommates.

However, the ancestors of yellow ants'-nest beetles were predators living in the forest litter; phylogenetic reconstructions allow to guess that they had long, strong mandibles, fully developed eyes and wings. Living in anthills required major changes in body structures.

To answer the question of how the ancestors of yellow ants'-nest beetles transformed their skeleton, muscles and other parts of the body, a group of Polish, Chinese and German researchers looked inside the body of these microscopic insects. They used advanced computerized microtomography to recreate every muscle, central nervous system, gastrointestinal tract and other structural details down to the finest detail and in three dimensions, a feat that could not be achieved by traditional methods. 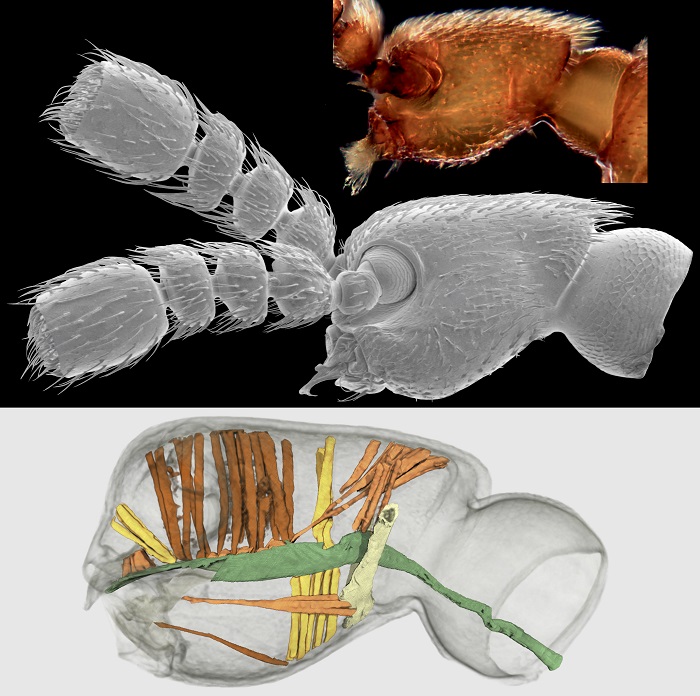 According to the researchers, some mouthparts of the predatory ancestors of yellow ants'-nest beetles, e.g. mandibles and palpi, have been reduced. At the same time, the structures covered with short hairs, which in today's yellow ants'-nest beetle form huge 'capillary devices', in which dense and long bristles allow to draw a drop of liquid food from the ant's mouth directly into the beetle's throat, have been extraordinary expanded.

Many head muscles related to the mandibles and jaws have regressed, and some have disappeared completely. The darkness in the ant colonies not only caused the complete loss of eyes; now it could be clearly shown that the optic nerves and visual centres of the brain have also disappeared. Most of the muscles involved in flight are greatly reduced, while the wing covers have become more complicated than those of the predatory ancestors of the yellow ants'-nest beetle. The 'lock' fastening the two covers has become complex and along with the change in the shape of the covers themselves, it provides increased resistance to the pressure caused by ants catching the beetles with mandibles while moving them from place to place. The powerful glands inside the head and thorax produce substances that are attractive to workers. The strategic positioning of the orifices of these glands allows the beetles to distract the ants from the most sensitive regions of the body, and at the same time ensures an appropriate feeding position.

The yellow ants'-nest beetles and similar extreme myrmecophiles still have many secrets.

Contemporary entomologists increasingly use experimental methods, until recently used mainly in space research, particle physics and advanced medicine. Entomology owes the great renaissance of morphological research and a huge amount of new data to 3D reconstruction of internal organs. It allows to explain the evolution of unusual adaptations and the emergence of new species.

The yellow ants'-nest beetle was described in 1790; its secrets have waited 230 years to be solved.

Find out more on the website of THIS and THIS publication.