Koala, wombat, frog, camel, and even crabs. And in Poland a cow representing farm animals and a deer representing wild fauna. Researchers analysed signs placed by roads to warn against collisions with animals. Can we expect an 'evolution' of traffic signs, or is it enough to stick with information like 'hedgehogs' or 'amphibians' added under the 'Other danger' sign?

Researchers from the Poznań University of Life Sciences in cooperation with specialists from the University of Cambridge and the Czech University of Life Sciences Prague looked at global changes of traffic signs warnings against collisions with animals. The publication of the international team coordinated by Polish researchers 'On the origin of species on road warning signs: A global perspective' appeared in the journal Global Ecology and Conservation. The authors of the article are Piotr Tryjanowski, Michał Beim, Anna Maria Kubicka, Federico Morelli, Tim H. Sparks and Petr Sklenicka.

SAFETY OF PEOPLE, PROTECTION OF SPECIES

Warning road signs are the most common method for preventing vehicle collisions with animals. It is even more effective when combined with a speed limit. The presence of these signs mainly provides psychological comfort to drivers but also reduces the costs of potential vehicle collisions (car repairs, hospitalisation and other medical costs) to insurance companies. 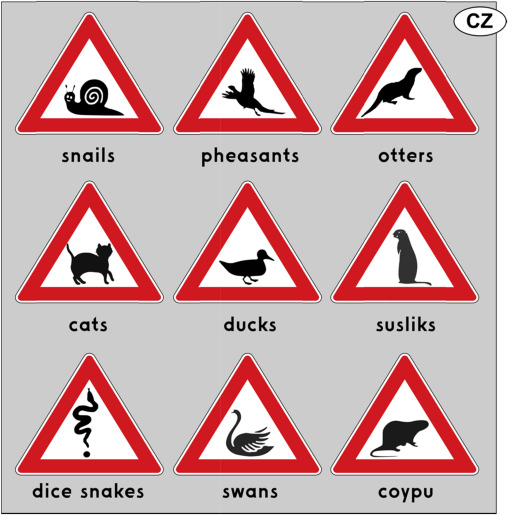 Researchers emphasize that collisions with animals have long ceased to be considered only in terms of their financial aspect. Traffic signs are now intended to counteract the decline of biodiversity.

Road infrastructure affects the decline of small animal species, such as frogs, toads, snakes and hedgehogs. Signs are designed to protect not only people, but also animals. Some signs inform about the presence of protected species. Others remind that small beings that pose no threat to the vehicle or those travelling in it may also use the road.

Traffic signs now more often inform, for example, about migration of amphibians such as frogs. These animal do not pose a threat for drivers and yet signs informing about their presence are still considered worth placing. “This most likely indicates that our attitude towards animals are changing,” says Professor Piotr Tryjanowski.

Uniform marking would be difficult due to landscape changes, varying car traffic intensity and occurrence of animals, and changes in the behaviour of animals and drivers. The shape and colour of traffic signs around the world varies according to local traditions and heritage.

Some countries adapt their signs to local climate and environmental conditions. In Europe, a sign’s background colour (white or yellow) is associated with snow cover. Yellow signs are mainly used in northern and central countries, white are more common in the south, where snow rarely covers traffic signs. Similarly, signs depicting animals are different, depending on local species.

A curiosity are signs that appear and disappear - just like animals. New technology helps to install dynamic road signs. The system of alerting to the presence of brown bear Ursus arctos in Slovenia is very interesting. The signs work only when the animals are in fact near the road, because the system uses GPS tracking in bear collars.

In Australia, the animals depicted on signs include both native wombats (Vombatus sp.) and Kangaroos (various Macropodidae species), as well as an invasive species the camel Camelus dromedarius.

Traffic signs inform and warn, they can be a tourist attraction and even help to remember the way. This is, for example, the case with kangaroo signs in Australia, caribou signs in Canada or elk and reindeer signs in Fennoscandia.

In western Poland, the most important animal in vehicle collisions is the European bison Bison bonasus. According to national law, signs depicting deer (as a general wildlife warning sign) are placed alongside roads, but in fact, by sight, size and even biological relationships, a sign depicting domestic cattle would probably be more appropriate in this situation.

Polish law only allows plaques under the 'Other danger' sign; on Polish roads, there are plaques with descriptions such as 'hedgehogs', 'amphibians', etc. According to the researchers, more signs devoted to wild nature than to domesticated animals have been designed recently. In developed countries, the paths of domesticated animals (horses, cows, sheep) less often cross the roads in the villages. On the other hand, there is growing public awareness of the need to protect wild animals.

WITH A COMPUTER (ON-BOARD) AMONG ANIMALS

Perhaps it would be worth considering introducing new signs that would show the animals that actually cross a given road. But scientists point to another problem: research shows that an excessive number of signs may hinder their understanding, and consequently fail to bring the expected results.

The authors of the analyses have considered how the signs will work for full, automatic driverless vehicles, steered by computer? An algorithm can work for large animals and initiate changes in braking or steering, similar to open dynamic signs and virtual fences for road-crossing animals. But it will not see animals, such as crabs, amphibians or reptiles, which is why in this case retrieving information from road signs may be better and more quickly adopted. A greater variability in road signs shapes, colours and forms may complicate their recognition by traffic-sign recognition technologies which use image processing techniques to detect them.

Road signs appeared in public space with the beginning of motor car usage. Individual countries quite quickly decided to harmonize them so that they would be understandable also for drivers, motorcyclists or cyclists from other countries. In 1931, the Convention on the Unification of Road Signals was signed in Geneva. The 1968 Vienna Convention on Road Signs and Signals, United Nations Economic and Social Council additionally standardised the signing system for road traffic.

“The Vienna Convention basically distinguishes two types of warning signs concerning animals: domesticated and wild animals. Polish provisions accurately reflect the convention: the cow symbolizes all domesticated animals, the deer represents wild animals,” says Dr Michał Beim from the Poznań University of life Sciences. He adds that the convention allows for additional signs. After a public debate, Germany allowed a sign warning about amphibians represented by a frog. Similar signs are used in Belarus. The Czech law, on the other hand, introduced an open system with animals like cats, geese and snakes on traffic signs.

The appearance, placement and information on traffic signs are subject to change. “We could even say that they are subject to evolution and hence the title of the paper referring to Darwin's On the Origin of Species. This is a small play on words,” explains Professor Piotr Tryjanowski, the first author of the paper published in Global Ecology and Conservation. More information in the source text: https://doi.org/10.1016/j.gecco.2021.e01600.