Gowin: International outreach of Polish science is one of the greatest challenges 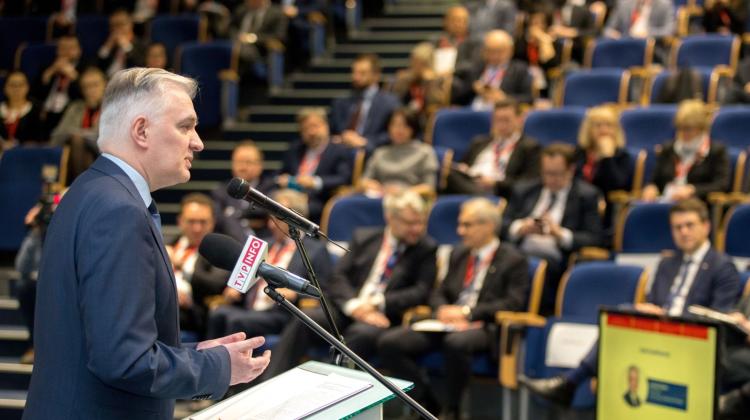 Minister of Science and Higher Education Jarosław Gowin during the opening of the conference "International Students in Poland 2018" in Gliwice. Photo: PAP/Andrzej Grygiel 29.01.2018

72 thousand foreigners from 166 countries study in Poland. International outreach of Polish science is one of the greatest challenges that we are facing, says Deputy Prime Minister, Minister of Science and Higher Education Jarosław Gowin.

Two-day conference "International Students in Poland 2018" at the Silesian University of Technology in Gliwice is organised periodically as part of the long-term program "Study in Poland", run jointly by the Conference of Rectors of Academic Schools in Poland and Educational Foundation "Perspektywy".

"If we were to name the most important challenges or, frankly, weaknesses of the Polish higher education, Polish science, the issue of international outreach would certainly make it to the top of the list" - Jarosław Gowin said during the conference, stressing that while progress had been made in this area in recent years, there was still a lot to be done.

"There is no other direction than going international. The alternative is stagnation, which would mean regression. I am sure that no one is contemplating that scenario" - he added.

In this context, the minister also mentioned the higher education and science bill prepared by his ministry, the so-called Law 2.0, also called the Constitution for Science. "Law 2.0, a constitution for Polish science, will significantly raise the level of Polish universities, increase their international outreach, encourage universities to open up to foreign researchers to a greater extent. There is a long road before the universities and the government that will support them along the way" - Gowin argued.

The conference participants emphasised that international outreach is the main driving force behind the development of higher education in the world. The National Agency for Academic Exchange has been established in Poland, significant funds for international exchange and raising the competences of staff in higher education institutions have been launched, the number of programs of study in foreign languages and the number of students from abroad continue to increase.

"72 thousand international students is a big number. When we started the Study in Poland program in 2005, we had less than 10,000 international students in Poland, today it is over 7 times more. This is an excellent progress, especially that the process is a demanding one. It is not easy for universities to make a transition to offering studies in foreign languages, for the staff, dean offices to adjust - a whole ecosystem that helps foreign students must be built" - said the president of the Education Foundation Perspektywy Waldemar Siwiński.

Among international students in Poland, more than a half are Ukrainians (37.5 thousand), followed by Belarusians (6 thousand). During the conference, participants admitted that while these numbers were great, efforts should be made to attract more students from other countries.

10,000 foreigners study medicine in Poland. According to Siwiński, the next area of education in which Poland should specialise is computer science.

The Achilles heel - according to Siwiński - is a small number of foreign lecturers at Polish universities. There are only 2.7 thousand of them among 100 thousand academic teachers.

Rector of the Silesian University of Technology Prof. Arkadiusz Mężyk said that his university had 128 international students studying in English. "Their number has doubled over the last 2 years" - he emphasised. He added that the university had recently been preparing for wider international outreach and now offered 13 courses of study in English. Administrative staff received training on handling the matters of foreign students, and new signs were installed in the university buildings. (PAP)