Gowin: The government has adopted the university reform project. Spending on science will increase by PLN 3.7 billion in 2019 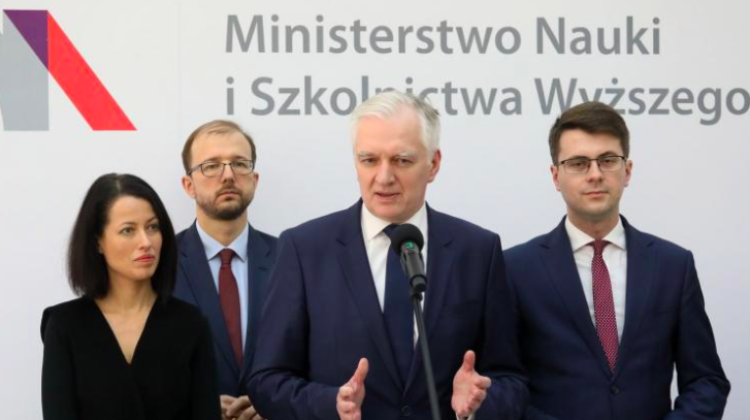 The government has adopted the bill reforming Polish universities, announced Deputy Prime Minister, Minister of Science and Higher Education Jarosław Gowin. He added that next year`s expenditures on science and higher education would increase by PLN 3.7 billion.

"This law replaces four existing laws. It significantly increases the autonomy of universities, opens the path of career advancement for young scientists, increases the level of internationalisation of Polish universities and science" - Gowin said.

According to Gowin, as a result of talks with Prime Minister Mateusz Morawiecki and Minister of Finance Teresa Czerwińska, corrections concerning the increase in funding for the science and higher education sector have been introduced in the project.

"We have decided to introduce an algorithm that will systematically increase spending on science in relation to GDP from year to year over the next 10 years. (...) If the economy grows, for example, by 4%, then the level of growth of science expenditure in a given year will be slightly higher than 4%. This way, these expenditures will grow in relation to GDP" - said deputy prime minister. He explained that every year spending on science will grow slightly above the rate of GDP growth.

He assured that next year the increase in spending on science will amount to PLN 700 million. "Secondly, on the occasion of the reform, the government will issue Treasury bonds for universities in the amount of PLN 3 billion. Expenditures on science and higher education will increase by PLN 3.7 billion in 2019" - he announced.

Gowin also added that the academic community would have guaranteed salary increases for university staff: "This will be decided by the government in the second half of the year".

"Our government will invest in the development of science and higher education. The funds will be smaller than those requested by the ministry, but really significant" - commented Gowin.

The Minister of Science was asked how he thought the process of parliamentary work on the project would look like in the context of certain Law and Justice (PiS) politicians (including Ryszard Terlecki) opposing the project.

"Some PiS politicians are not in favour, but other PiS politicians, also important ones, are in favour of the project. (...) At the coalition management level we have decided that the project will go to the Parliament and will be processed as quickly as possible" - Gowin announced.

"Today, this project gained the support of a particularly important group of PiS politicians - ministers of Prime Minister Morawiecki`s government from PiS" - said deputy prime minister. In his opinion, "the project will pass through the Sejm without any systemic changes".

The new law was expected to equalise the retirement age of academic teachers - 65 years for both women and men. Jarosław Gowin informed that the government agreed to the postulate of the Minister of Family, Labour and Social Policy Elżbieta Rafalska to "to differentiate the retirement age" of women scientists.

The higher education and science bill (the so-called Law 2.0, the Constitution for Science) is the first comprehensive university reform in over 12 years. It provides for major changes in the functioning of universities, their funding, career advancement path, the doctoral procedure. Important directional changes in the draft Law 2.0 include making many possibilities available to universities dependent on the scientific categories that each higher education institution receives in the disciplines it offers. The Law, as proposed by the Ministry of Science, is expected to become effective on October 1, 2018.