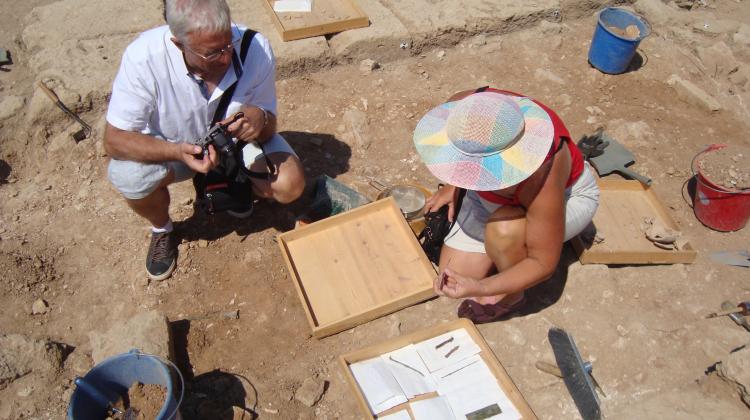 A set of surgical instruments made of bronze and iron has been discovered by researchers from the Institute of Archaeology of the Jagiellonian University in a room in more than two thousand years old destroyed portico in Nea Paphos in Cyprus. The researchers speculate that it could have been a doctor\'s office.

During this year\'s work in the ancient city, archaeologists in Nea Paphos examined several rooms within the eastern portico of the agora, or central square. Archaeologists were surprised by the large number of interesting and valuable discoveries.

In one room archaeologists stumbled upon the fully preserved glass unguentarium - a bottle used to store oils and perfumes, but also medicines. However, the most important find was a set of surgical instruments - five made of bronze and one made of iron. Originally they were probably placed in a bronze box - its remains are preserved.

"They are very similar to those discovered in the famous House of the Surgeon in Pompeii, Italy, the ancient city buried by the dust from the volcano Mount Vesuvius almost two thousand years ago" - said in an interview with PAP head of excavations Prof. Ewdoksia Papuci-Władyka of the Institute of Archaeology, Jagiellonian University. Pompeian House of the Surgeon is one of the oldest known structures in this ancient city. It dates back to the 2nd century BC, so it is approx. 200 years older than the room discovered by Polish archaeologists in Cyprus.

Among the tools found Poles by Polish archaeologists was a thin long spoon, pliers and instruments that were probably used to set broken bones. However, Prof. Papuci-Władyka reminded that Roman doctor Aulus Cornelius Celsus (c. 25 BC-50 century AD) in his work "De Medicina" named more than a hundred different tools used the ancient by doctors. Many similar instruments are used in medicine today.

In the second room, the researchers found, among other things, two completely preserved glass vessels and two ceramic oil lamps. Originally, these vessels were in a box, of which only an iron grip is preserved.

Scientists believe that the portico collapsed in the earthquake. One of the bigger earthquakes occurred in the year 126 AD, and was recorded in written sources. The portico was never rebuilt, which is why the discovered monuments survived in such good condition - believes Prof. Papuci-Władyka.

Eastern portico of the agora, which housed the doctor\'s office, was open to the outside of the agora (not to its interior, as in most known cases). In the first half of the 2nd century AD it also housed shops, workshops and service establishments. Their entries were from the east side, from the street leading to the agora. Scientists speculate that the portico could have a colonnade also on that side.

With this year\'s discoveries, scientists confirmed that the eastern portico of the agora, where the surgeon\'s office was discovered, functioned until the 2nd century AD and not, as Cypriot archaeologist K. Nicolaou believed - until the 4th century AD. The agora was the central square of the city, surrounded by places worship and administrative buildings. There people traded and discussed public matters. As it turns out - doctors also conducted their activities there. Agorae were rectangular in form. They were often surrounded by porticos.

The sixth season of the Kraków expedition in Paphos, conducted by the Department of Classical Archaeology IA UJ as part of the Paphos Agora Project lasted from August to October. The study was possible with funding from the grant MAESTRO of the National Science Centre.

As part of the research project, Polish archaeologists are also trying to survey the immediate surroundings of the agora and find hitherto unknown buildings and parts of the ancient port infrastructure. Also in this area of Polish scientists have had some success - this year, using geophysical methods, they discovered extensive structure measuring 25 by 15 m to the northwest of the agora. During the coming seasons they will attempt to determine its function.

Paphos is one of the most important archaeological sites in Cyprus. In the Greco-Roman it was the capital of the island. Within few years, Polish archaeologists changed the picture of the origins and development of the city existing in the publications on Paphos, moving the construction date of the agora to the Hellenistic period (previously it was thought to be 200 years younger) and discovering the remains of large public buildings from that time, proving the intensive construction activity in Ptolemaic times.