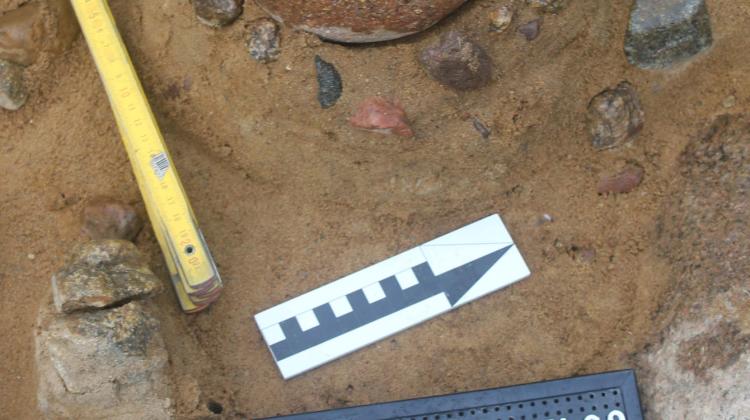 Inhabitants of the area of central Poland were in contact - and perhaps also traded with the people living in today\'s Scandinavia - already in the Mesolithic, that is, 8 thousand years ago. These are the conclusions from the excavations carried out in Paliwodzizna (Kujawsko-Pomorskie) by Dr. Grzegorz Osipowicz from Toruń.

"We found well-preserved remains of stone structures, which include hearths, walls and pavements, made, it seems, between nine and eight thousand years ago. The closest similar structures have been found in Sweden and Norway" - told PAP Dr. Grzegorz Osipowicz from the Institute Archaeology of the Nicolaus Copernicus University in Toruń, who led the excavations in Paliwodzizna.

The researcher noted that equally unique were the flint tools found in this place, namely geometric heads. These items were placed as inserts, which "armed" larger tools made of organic materials, for example arrows and harpoons. Heads such as those found in Paliwodzizna, are called notched tools.

"Similar heads are known from other archaeological sites in Poland, but usually single items of this type were discovered in the company of the dominant tools typical of the local culture. Here they were found on their own, among other installations - walls and pavements, which are also +culturally foreign+" - added Dr. Osipowicz.

Paliwodzizna was not the only place where archaeologists stumbled upon traces of influence from the far north. This year the Museum in Grudziadz received a magic stick (http://naukawpolsce.pap.pl/aktualnosci/news,409040,magiczna-laska-w-muzeum.html), which - as the analysis shows - was made of antlers of an animal that lived in Finland . It was discovered in the village of Gołębiewo (Kujawsko-Pomorskie). It was made in the period, from which the enigmatic remains of the prehistoric human activities in Paliwodzizna probably come.

"This is yet another proof that the central Polish lands in the Mesolithic could have much closer contacts with that part of Scandinavia. Until now, similar ideas were dismissed due to the lack of serious evidence" - concluded the researcher.

Archaeologists do not offer a clear answer to the question about the function of the place they have discovered. Its cult significance may be indicated by a small number of flint household tools, large amount of burning (discovered all over the area and in the layers of peat adjacent to the water reservoir) and the individual lumps of red dye - ochre.

Scientists do not exclude that the place they studied had been associated with large scale production of birch bark tar. This is indicated by the remains of tarry substance discovered on many stones, that is currently being subjected to expert analysis.

Dr. Osipowicz plans to return to Paliwodzizna in 2017. He wants to take a closer look at the bog adjacent to the archaeological site. He suspects that the bog could hide intact traces of human presence before 9 thousand years.