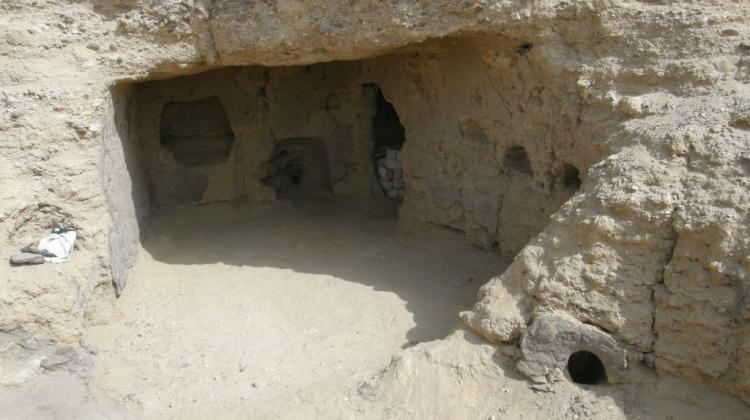 Polish archaeologists in Egypt have discovered a medieval hermitage, and in the full set of artefacts that illustrate the daily life of Egyptian monk more than 1,300 years ago - a pair of sandals, fragments of pottery, textiles, wine amphorae, and even... a letter.

"The objects we discovered during excavations allow to reconstruct the hermit\'s daily life" - told PAP Prof. Włodzimierz Godlewski from the Institute of Archaeology at the University of Warsaw.

The finds include a pair of leather sandals with multi-layered soles, a full set of ceramic vessels, necessary for everyday life, including large storage vessels and amphorae for wine. There are also pieces of fabric, perhaps the hermit\'s clothes, leather goods, braids and broken glassware.

Hermitage was discovered within the monastery Naqlun in the oasis of Fayum, where Poles under the auspices of the Centre of Mediterranean Archaeology of the University of Warsaw have been conducting research since 1986. The monastery was built in the mid-fifth century, as a large complex of hermitages forged in dells and on hillsides. In the seventh century it was inhabited by 120 hermits. At the end of the twentieth century only two monks were left, but now the place is booming again.

During the last season, archaeologists studied the hermitage consisting of three chambers carved into the rocky hillside. The hermitage was inhabited in the sixth and early seventh century by a single monk. After his death, it was abandoned. Hermitage consisted of two parts - residential are comprising two rooms (day room and bedroom) and a small kitchen.

According to the researchers, "day room" was carefully plastered and renovated several times. In its walls several niches were carved, in which the monk placed everyday utensils. In the corner of the kitchen there was a deep pit, where the owner of the hermitage stored grain. "The pit was ventilated with an outlet extending out of the room, which was a unique installation in the previously studied hermitages in Naqlun" - says Prof. Godlewski.

"The most interesting discovery is a papyrus letter to the monk Neilos, which is preserved in its entirety, but with damages that make reading it difficult" - said the archaeologist. Papyrologist, who decrypts the letter - Prof. Tomasz Derda - said that the letter is written elegantly, with a skilled hand. It is an invitation for the hermit from a high-ranking person in the church hierarchy, possibly a bishop, presumably from the city of Arsinoe which is in the same region as the Naqlun monastery.

Archaeologists discovered the letter among several preserved papyrus fragments. This is not the first document found by the Poles in Naqlun - in 1997 they discovered an archive consisting of 50 medieval notary documents. From these documents we know, among other things, the value at the end of the tenth century of gardens and houses in the Fayoum oasis, where the monastery is located.