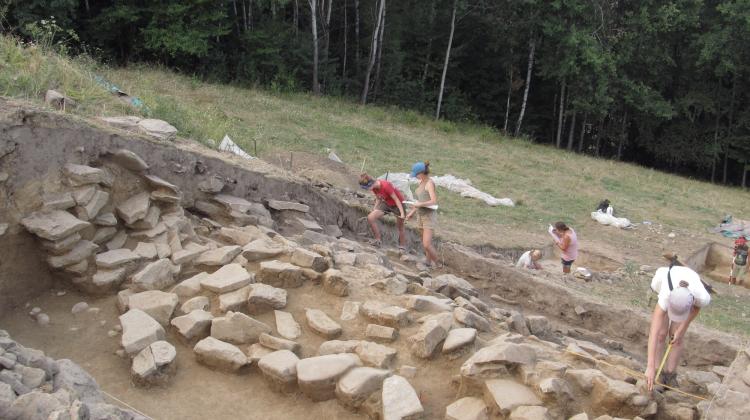 View of the northern part of the archaeological excavation in mid-August. Retaining wall from the Early Bronze Age is visible on the cross section of the trench, in the bottom of the trench a line of rocks forming the lowest layer of the wall. Photo by M.S. Przybyła.

The oldest example of stone wall in the history of construction in the Polish lands, more than two and a half thousand years older than Romanesque architecture, has been discovered by archaeologists from Kraków on Zyndram’s Hill in Maszkowice (Małopolska).

Discovery of such significance was unexpected because archaeologists had been studying the archaeological site in Maszkowice since the beginning of the twentieth century. As a result of those excavations they discovered mainly the remains of a settlement inhabited from 1000 to 50 BC. Archaeologists from the Jagiellonian University, led by Dr. Marcin S. Przybyła, appeared in Maszkowice in 2010. Surprise awaited under the remains of the settlement from the late Bronze Age and Iron Age - it turned out that there were relics of a more than a half thousand years older settlement.

"Its inhabitants were not indigenous people, living in Małopolska since the end of the Stone Age, but a small, no more than 12-person group of colonists from the south, from the territory of present-day Hungary" - Dr. Przybyła told PAP.

Other archaeological sites associated with the community archaeologists refer to as the Ottomány culture have been discovered in the Polish Carpathians. The best known is the fortified settlement in Trzcinica near Jasło, but that settlement is very definitely different from the one discovered in Maszkowice. In the former, the embankments were not built of stones, but the earth and wood.

"In the whole Central Europe there are only a dozen sites dated so early with more or less well-preserved stone fortifications - said the archaeologist. - At that time, the use of the stone as a building material was typical of the Mediterranean areas. In the temperate zone of Europe until the Middle Ages fortifications were built with wood and clay."

Scientists were surprised by the size of the structure made by prehistoric builders. The top of the hill was flattened, creating a plateau with an area of 0.5 hectares. Tons of clay from the hill top were used to build a terrace on the gentle eastern and northern slope of the hill, which additionally expanded the area of the settlement. The wall is made of large, half-meter sandstone blocks held together with clay.

"From geophysical research we know that the wall was about 120-140 m long, surrounding the entire settlement from the east and north. Undoubtedly, besides being a retaining wall, it also hindered potential attackers’ access to the settlement"- added Dr. Przybyła.

Discovery of the external face of retaining wall made a huge impression on archaeologists. Unlike the interior wall, it had not been made of sandstone blocks with irregular shapes, but huge, tessellating blocks, often reaching 1 meter in length. Some of them have a regular hexagon shape. 4-5 layers of tightly adjacent stones are preserved to this day. Given the height of the terrace and the number of stones that fell from the wall and have been found below its level, the original height of the fortification facade could reach 2.7 m.

On the slope, about 5 meters from the face of the wall, the defence system was further strengthened by an approximately 1.5 m deep, narrow trench with a triangular cross-section. Fortune smiled on the archaeologists, they were able to discover the remains of the entrance gate. It has the form of a narrow, 1.5 m corridor, crossing the wall and leading up through the clay embankment, toward the interior of the settlement. The walls of this passage were reinforced with large sandstone slabs "anchored" in the lowest layers of stones forming a retaining wall.

Archaeologists estimate the age of the settlement at between 1,750 and 1,690 BC based on radiocarbon analysis - organic remains accompanying the structures have been tested. According to Dr. Przybyła due to the size of the whole structure and the stone blocks used for its construction, it is a masterpiece of architecture much closer to solutions found in the Bronze Age civilizations in the Mediterranean than in any cultural traditions of Central and Western Europe. Archaeologists are considering the possibility that the applied know-how came from there.

"This direction contacts of at least some of the prehistoric inhabitants of >>Zyndram’s Hill<< has already been indicated by previously discovered fragment of a stylised human figurine - so-called violin idol. Such statuettes were produced in large amounts in Mycenaean Greece, and Northern Balkans" - he added.

Dr. Przybyła believes that his expedition’s discoveries are also important from the point of view of the popularisation of Polish archaeology. The researcher believes that the main problem with talking about archaeology of the region is that traces of ancient settlements are usually very difficult to read. The case of Maszkowice is different: "We are talking about where the houses were, or how extensive wooden palisade was, using past tense and reading it from traces in the ground that are difficult to understand for a layman. On >>Zyndram’s Hill<< the fortifications exist in the present tense: wall and gate from the Bronze Age are actually still standing in the archaeological excavation. Their functions are clear without additional explanation for visiting tourists and local residents".

This year\'s excavations ended at the end of August. Archaeologists secured and re-buried the discovered remains of the settlement. The researchers plan to continue excavations next year.