From scrap heap to museum 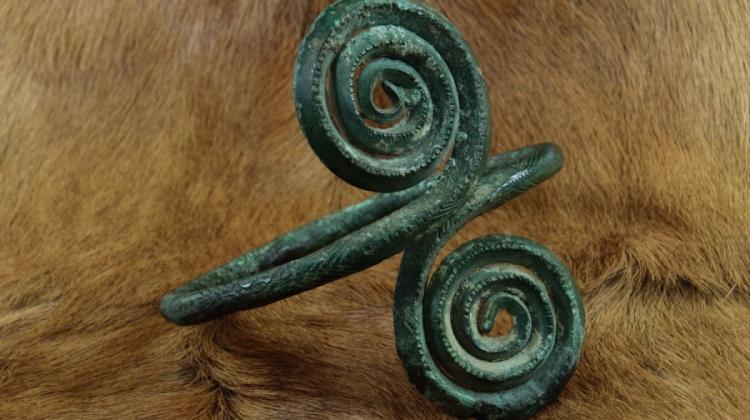 A unique monument has been donated to the archaeological collections of the District Museum in Sandomierz by an accidental finder. The arm ring made of bronze is more than 3 thousand years old.

The modern history of the millennia old ornament began 30 years ago, when Stanisław Kwiatkowski from Opatów discovered it in the scrap yard in Jasice near Ożarów, Świętokrzyskie province. Over the next few years, in the 1980s, the object was on display at the Underground Tourist Route in Opatów. After the liquidation of exhibition it was returned to the finder, who a few days ago donated the artefact to the District Museum in Sandomierz.

"Soon after conservation visitors will be able to admire it on a permanent archaeological exhibition in Sandomierz Castle" - said Monika Bajka, museum archaeologist. "We will apply through the Provincial Office for the Protection of Monuments in Kielce to the Minister of Culture and National Heritage for an award foreseen in such cases for the finder, who saved the object from destruction and handed it over for scientific analysis and to the museum" - she added.

According to the curators, the style and form of the object and its ornament can be attributed to the Trzciniec culture community and dated to the years around 1300-1100 BC. In the Sandomierz Upland such finds are extremely rare, presumably coming from manufacturers in Silesia and Wielkopolska, but scientists do not exclude the local production of such items. Archaeologists regret that the ornament from Jasice is devoid of context - we do not know exactly where it came from and how it ended up in the scrap yard. They assume, however, that it had been discovered in the area.

Not only the origin of the artefact is enigmatic. "We have little information on how these ornaments were worn, because they usually are known as treasure or standalone finds. Only a grave discovery could clarify this matter" - added Bajka. Archaeologists speculate that these ornaments were worn by both men and women. They could be worn on the shoulder or - as indicated by the grave discoveries in Germany, where similar ornaments have been found on the bones of the lower leg - on the leg.