“We managed to use light, i.e. massless photons, to make something that resembles a group of particles that have spin. In this case, the polarization of light replaces spin,” says Professor Jacek Szczytko from the University of Warsaw.

One and a half years ago, a team of scientists led by Professor Jacek Szczytko from the University of Warsaw, showed in Science how photons - particles without mass and moving at the speed of light - can be 'stopped' by clever tricks and made to behave like completely different particles - electrons that have mass and react to magnetic field.

Professor Szczytko from the university’s Faculty of Physics said: “Now we went a step further. We managed use light to make something that resembles a group of particles that have spin. In this case, the polarization of light plays the role of the spin.”

The research was published in the journal Optica. 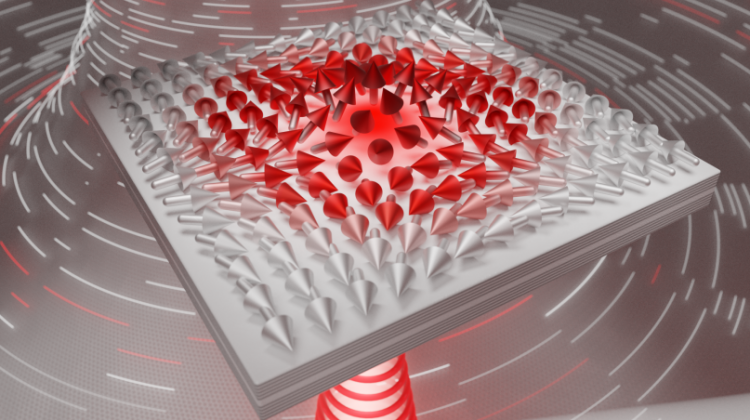 Making the cover of Optica, this is the second order anti-meron spin texture observed on the surface of the optical microcavity with a birefringent LC layer. Credit: Optica, M. Król et al.

Spin can be imagined as a property related to the rotation of a particle about its axis; it can only have two values. The magnetic properties of matter depend on how the spins of individual electrons are arranged relative to each other. Usually, in a non-magnetized material, the electron spins are distributed chaotically. However, when the particles become magnetized, for example in a ferromagnet, all the spins line up in one direction.

Szczytko said: “On a magnetized plane, you can study elementary excitation - a flip of one spin - to see how the spins in the vicinity behave. This flip of the spin creates a topological defect in physics: an object called a skyrmion.”

He added imagining a vortex using the example of a vector field. A vector field is e.g. a weather map, on which shows wind directions and speeds in particular places. Whirlwinds would be vortices in this field.

He continued: “And almost everyone wears a vector field on their head: a hair, just like a vector has a beginning and an end. More than 100 years ago, Luitzen E.J. Brouwer proved the hairy ball theorem that you can't comb a hairy ball flat without creating a cowlick, or you can't comb the hair on a coconut.” 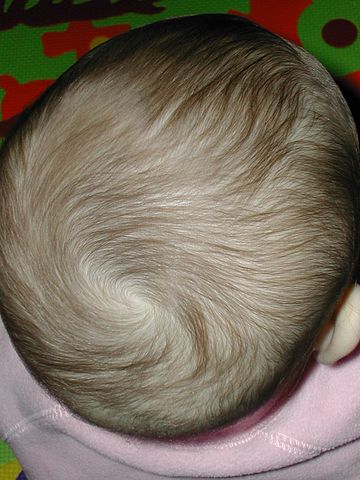 Photo: Hair on the head as a vector field? One of the theorem is that you can't comb a hairy ball flat without creating a cowlick. Credit: NoJhan, CC BY-SA 2.5, via Wikimedia Commons

Different kinds of vortices in a vector field have been given different names. There are for example skyrmions, merons, antimerons of the first and second order, which have different degrees of vorticity.

Szczytko said: “Taking advantage of the fact that our light behaves like a magnetized particle, in the optical microcavity we created a beam of light, in which there are exotic objects" vortices, skyrmions and merons with different characteristics. We can control them. And so some of such objects - second order merons and antimerons - were experimentally observed for the first time.” 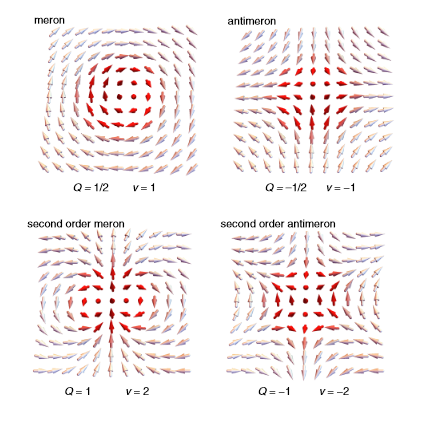 In this case the optical cavity is a thin layer of liquid crystal enclosed between two mirrors. Inside the cavity, the light creates a standing wave - optical modes with precisely defined energy and polarity. In this experiment, the liquid crystal that refracts light with different polarizations differently, transmits light with precisely defined properties in different directions.

He added: “We know that light is a massless particle. But in the cavity it behaves like a particle with mass and its polarization plays the role of a spin. We play with polarization and light recreates structures characteristic of ferromagnetics, their elementary excitations."

The developed device allows scientists to test the behaviour of vector fields on an optical table: annihilation, attraction or repulsion between distinct second-order merons in the generated field.

Szczytko said: “Understanding the nature of the interaction of these objects may be important for understanding the functioning of more complex physical systems that require more sophisticated research methods (for example cryogenic temperatures).”

Skyrmions and merons with different degrees of vorticity are found in such diverse physical systems as nuclear matter, Bose-Einstein condensates, thin magnetic layers; they are part of the description of the quantum Hall effect, atmospheric lows, highs and tornadoes. “Experimental systems in which, upon request, you can create various vector fields and study their interactions, are particularly interesting,” said Szczytko, adding: “What we do is play on the border of physics and mathematics, and especially topological issues.”