Winners of ‘Popularizer of Science 2020’ announced 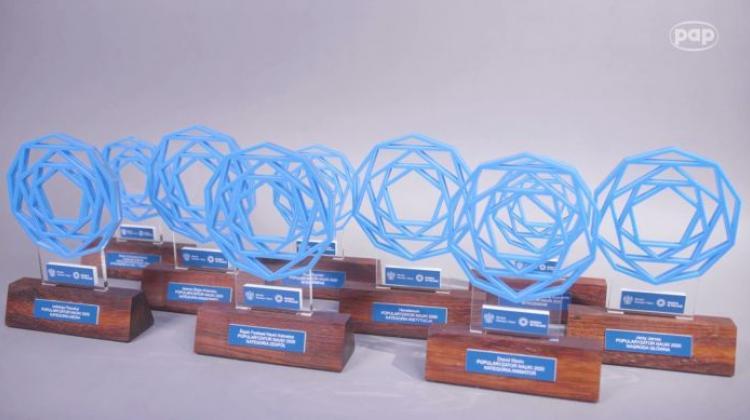 The winners of the 16th edition of the Popularizer of Science competition, which awards people, teams and entities that promote science in Poland, have been announced.

The Main Prize went to Dr. Jerzy Jarosz, a professor at the University of Silesia. Since 1983, the winner has been giving lectures with demonstrations of experiments 'The Peculiarities of the World of Physics'. He is an organiser of science festivals and conferences on how to teach well, and the President of the National Physics Demonstrators Club.

“If we manage to make someone dependent on the pleasure of understanding the world, acquiring more knowledge and better and more precise information about how the world works, then we have created a teacher or scientist, who will then draw pleasure from this work throughout their life,” says Dr. Jarosz.

In previous years, the winners of the competition were announced to the public at the awards ceremony. This year, the ceremony could not take place due to the pandemic.

About 100 candidates entered this year's competition.The candidates were evaluated by a 14-person jury, whose members included experienced science promoters, laureates and people distinguished in previous editions of the competition.

This year's winner in the Scientist category was Dr. Joanna Stojer-Polańska from the State Higher Vocational School in Racibórz and the SWPS University in Katowice. Her science promotion activities concern forensic examinations and the work of animals with forensic traces. The winner is the author of books and workshops for children, teenagers and adults.

“In crime TV series, one genius detective usually solves criminal cases, but in real life it is the work of many people. At the workshop I can show the work of a forensic pathologist, anthropologist, geneticist, because we all have to work together to solve the mystery,” Dr. Stojer-Polańska said . She added that for her, promotion of science is also a chance to talk about animals: dogs and horses on duty, saying: “We are fighting for pensions for dogs and horses so that the animals no longer in service are provided with support.”

The award in the Animator category (a category for people without a doctorate) went to Dawid Masło, who promotes natural sciences. He conducts field classes, records educational videos, participates in radio broadcasts and writes columns. “Promoting science should be a friendly meeting, pausing for a moment and making a conversation through the prism of knowledge and experience,” he said.

In the Team category, the winner was the Silesian Science Festival Katowice. According to the jury, it is a very successful combination of a science festival and a science picnic. During its four editions, 150,000 visitors attended hundreds of lectures, workshops, watched over 700 shows and performances by over 80 special guests. As many as 200,000 science enthusiasts took part in online campaigns. The team representatives say that as part of the festival they wanted to show the great potential of Silesian universities, their diversity and conducted research. They decided to include as many academic entities as possible in their festival.

The award in the Institution category went to the Hevelianum in Gdańsk. The institution has been operating for 12 years. This science centre combines education, recreation and the promotion of natural sciences. Its exhibitions are located in historic, revitalized military buildings. According to the Institution: “Sharing passion is at least as much fun as discovering itself. At Hevelianum, we are looking for answers to the most persistent questions, even those from outer space.”

The editors of Filozofuj! were awarded in the Media category. Filozofuj! is not only an illustrated bimonthly that promotes knowledge of philosophy, but also a website and discussion clubs.

Chief editor Dr. Artur Szutta emphasizes that philosophy is a fascinating discipline, one that teaches critical thinking, among other things. “And critical citizens are the very heart of democracy. Without critical thinking, our democracy does not have a good future,” he said, adding that popularising philosophy makes more people interested in it.

The jury also decided to award two special mentions. One of them went to Dr. Piotr Rzymski from the Medical University of Poznań. For years, the scientist has been promoting research mainly in the field of medical and environmental biology. He runs the blog Przez Żołądek do Zdrowia ('The Way to Health is Through the Stomach'), writes articles for Polityka, and during the COVID-19 pandemic, he presents the latest scientific knowledge about SARS-COV-2 in the media.

Piotr Rzymski said that in the face of the pandemic, scientists needed to understand how the virus works and how to protect ourselves from it. This knowledge helped develop a vaccine. “It gives immunity to COVID-19, but Poles also need immunity to the flood of fake news that try to dissuade them from the decision to vaccinate. This will be a year of huge challenges for the promotion and communication of science,” he said.

The second special mention was awarded to the Hydropolis Centre for Ecological Education in Wrocław. Its visitors can learn about theories related to the nature of water, its origins on Earth, the secrets of the deep, as well as water engineering, or the role of water in religions and philosophies. “Everyone can change our future with their daily activities, changing habits to be more ecological. That is why our actions are addressed to everyone. (...) Because everyone who saves even one drop of water will save the world,” the Centre’s Marcin Garcarz said.

Every year, the editors of PAP - Science in Poland grant a special Tomasz Trzciński Award for the benchmark information policy. This year's award went to Dr. Beata Czechowska-Derkacz, a longtime spokeswoman for the University of Gdańsk. “I received this award at a special moment (...). I have just decided to end my beautiful adventure with being a press spokeswoman and take up the challenge of promoting scientific research at the University of Gdańsk,” she said.

Jury chairman Professor Michał Kleiber said that promoting science should be an important part of every scientist's mission, and in this effort scientists should be supported by their home institutions and specialized media representatives. He said: “This approach will allow us to expand our knowledge about the world, the threats we are facing and how to deal with these threats.”

President of the Polish Press Agency which organises the competition, Wojciech Surmacz, said: “We want broadly understood science to reach everyone, young people and adults alike. We continue to learn throughout our life; it is worth being up to date, learning about new discoveries and everything that is happening around us.”

Congratulating the winners of this year's competition, Undersecretary of State in the Ministry of Education and Science Anna Budzanowska said: “The time of the pandemic shows that there is a huge public demand for reliable, well-prepared information based not on opinions, but supported by facts, research and scientific knowledge. You, the popularisers of science, are the ones who prepare such information.”

She added that her ministry supports the promotion of science and last year  spent over PLN 6 million on such activities, including organization of science festivals, picnics and other projects.