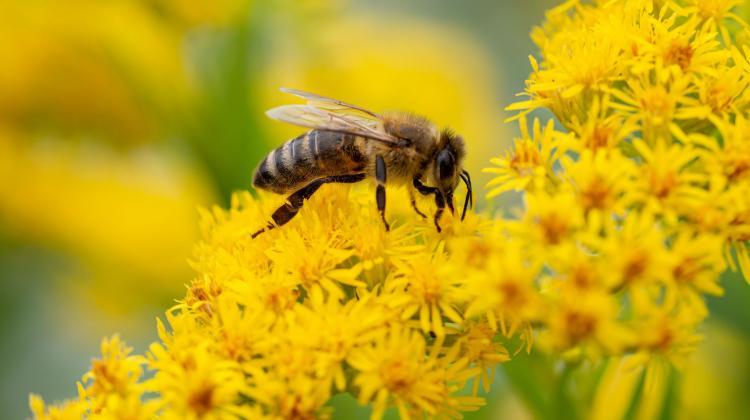 The health-promoting properties of goldenrod honey have been called into question by scientists who say there is no scientific data to back up claims that it helps cure diseases.

Researchers also found that despite all the hype, the honey is detrimental to both the environment and bees.

Dr. Magdalena Lenda from the Institute of Nature Conservation at the Polish Academy of Sciences and the Australian University of Queensland said: “Some stores in Poland and abroad advertise goldenrod honey as helpful in kidney, lung and mouth diseases.

“So far, it has not been proven that goldenrod honey cures any diseases.”

She added that beekeepers, online stores or even some medical portals increase the demand for goldenrod honey by repeating this unverified information. This, in turn, has an indirect impact on the environment. Goldenrod, from which honey is produced, is a highly invasive plant in Europe, and its impact on biodiversity is definitely unfavourable.

Dr. Lenda said: “Beekeepers should know that goldenrod is not a plant they want. And consumers should be aware that buying goldenrod honey is bad for the environment.

“Nobody has shown before that dietary preferences, marketing of the so-called superfoods and pseudo-medicinal foods, can adversely affect the environment."

The analysis of Allegro (Polish auction site) trends shows that the sale, supply and price of goldenrod honey have increased in recent years.

Lenda, who research appeared in the journal Ecology Letters, said: “Misinformation concerning the properties of this honey increases interest in the product, its prices are rising, and as a result more beekeepers want to have this product in their offer. Then they start to take their hives to the places of goldenrod flowering, and thus help pollinate these plants.”

The honey bee is the main pollinator of goldenrod.

The researcher says that there are even cases of beekeepers... planting goldenrod. Meanwhile, as she points out, both the sale and planting of goldenrod (which is an invasive plant) have been illegal both in Poland and in the European Union since 2012; you must have the appropriate permits for that.

As part of their research, the scientists checked auction portals available in Poland, where they found hundreds of for goldenrod seeds and seedlings, advertised as a honey plant for sale. The biologist pointed out that Allegro introduced a ban on the sale of invasive plants only in December this year.

She added that also on beekeeping forums, users exchange information on how to grow the plant.

Lenda said: “I do not think that beekeepers do it in bad faith. It seems that the information from naturalists about the harmfulness of invasive plants is too weak to reach the public.”

The invasion of goldenrod is harmful for wild plants, animals and farmers, but also for the bees that pollinate it.

Dr. Lenda said: “Our research has shown that in a wasteland, from a density of 1-5 percent, goldenrod can reach a density of 90 percent in 2-5 years! After such an invasion, the biodiversity of native plants in this area drops to only 10 percent. In practice, this means that very few other plants bloom there.

“Goldenrod is an allelopathic plant; you could say that it uses chemical weapons to eliminate other plants from its territory.

“If the availability of other plants drops so drastically in a given area, the number of animal species inhabiting the area also drops. There are 75 percent fewer native pollinators in such an area' including wild bees and hoverflies. The numbers of ants and birds using a given area also decrease.

“So there is nobody to pollinate flowers, get rid of pests, remove dead animals. As a result, in the areas around the goldenrod farmers may obtain less yield.

“The invasion of goldenrod can translate into measurable losses for farmers.”

Another issue that should be of particular interest to honey producers is the effect of goldenrod nectar on the bees themselves. Dr. Lenda said: “In laboratory studies, we found that feeding bees with goldenrod nectar reduces their survival rate compared to feeding them with multiflorous nectar. It also turned out that it was even more beneficial to feed the bees with sugar.”

She added that in areas where goldenrod blooms, the availability of other flowers is at the level of 10 percent and they are actually only available in late summer and fall. And there is a lack of food for bees in other seasons of the year, for example in spring and summer, when a new generation of insects is developing.

Lenda said: “Thus, the diet of bees that work in goldenrod is very poor. By driving their hives to goldenrod, beekeepers are doing a favour to the plant, the presence of which is detrimental to bees in the long run.”

END THE FASHION FOR GOLDENROD HONEY

To combat the destructive nature of the honey, Dr. Lenda argues that the public should be made aware of its harmful effects and encouraged to switch to honeys less damaging.

“I would prefer it if the goldenrod pollen and nectar go to waste.”