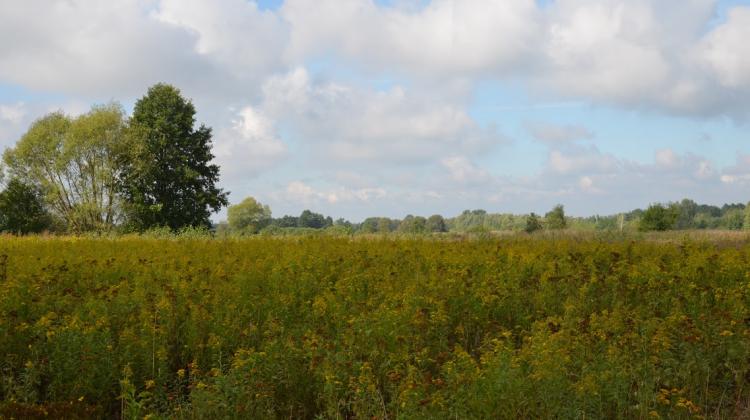 Even invasive plants can sometimes have a positive effect on native wildlife. On Solidago canadensis (Canadian goldenrod) there are many more spiders than on native grasses, and their webs catch more preys - report researchers from Poznań.

Yellow flood moves through Europe. It is Canadian goldenrod - a fast growing, high perennial that effectively drowns out all competition - to the extent that the space it occupies, from the point of view of the diversity of species, are not much better than of large-scale monoculture. It is considered one of the most expansive invasive plants in Europe.

The only advantage of goldenrod is its high honey yield. Benefits from this are small, however, as goldenrod blooms in late summer and autumn, when bees are less active, and beekeepers usually no longer collect honey.

Scientists from the University of Life Sciences in Poznań have shown, however, that sometimes even a dangerous invasive plant may have a positive impact on native fauna. "We have noticed - while being in the field in spring - that dry, old goldenrod is home to a lot of spiders. We collected samples from areas covered with goldenrod and those not occupied by this plant, and in the laboratory we counted and labelled spiders, and on the plants we counted webs and the number of victims" - said Krzysztof Dudek.

It turned out that on goldenrod there were many more spiders than on native grasses. In the goldenrod-free areas there were on average 2.2 individuals spider per square meter, while on one meter of an area occupied by goldenrod, there were on 14.6 spiders! And while native plants, such as high grass, were home to orb weaving spiders, goldenrod - in addition to those - also attracted representatives of tangle-web spiders.

Moreover, the webs built by spiders on goldenrod caught far more victims, an average of 155.3 insects per 1 m2! In areas unoccupied by goldenrod there were on average approx. 13.8 spider victims per 1 m2.

"This is probably because the stems of goldenrod offer a much larger area than to build a web than grass. It is one of the rarely documented cases of a positive impact of invasive plant species on native animal species" - emphasised Krzysztof Dudek.

This year, scientists want to repeat the study to determine the impact of goldenrod on spiders during its flowering.