SPICE: Invisible Colours of the Sun 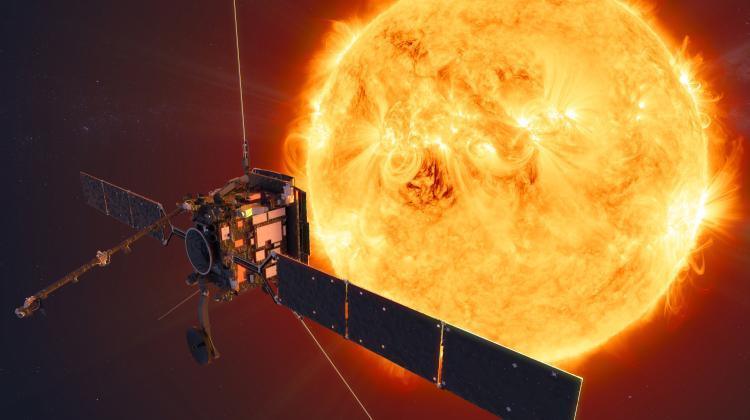 Artistic rendering of the Solar Orbiter against the background of the Sun. Source: ESA

A unique instrument aboard the Solar Orbiter probe launched on February 10 is the SPICE spectrometer: an instrument for measuring spectrum in the extreme ultraviolet range. Dr. Andrzej Fludra, head of the spectrometer consortium, told PAP about its capabilities.

The space probe will explore the Sun`s poles that are barely visible from Earth. It will provide new data about our star and heliosphere. Solar Orbiter will use a combination of ten instruments to study the surface of the Sun, its hot external atmosphere, magnetosphere and solar wind changes. One of them is the SPICE spectrometer.

The international consortium, which has been involved in the construction of SPICE since 2012, includes companies and institutes from France, Germany, Norway, Switzerland, the UK and the US. The consortium is led by the RAL Space department of the Science and Technology Facilities Council (STFC) in the UK, and the head of this consortium is Dr Andrzej Fludra, educated in Poland and living in the UK.

`The high-resolution spectrometer we have built, recording the spectrum in the extreme ultraviolet range, is the only device on board the Solar Orbiter with such capabilities; the other instruments only record images or other ranges of radiation`, explains Dr. Fludra.

`Ultraviolet covers a wide range from visible light to X-rays (UV wavelength is shorter than violet light, and X-ray light is shorter still). We measure in two relatively narrow bands: 70.4-79 nm and 97.3-105 nm, which are in the extreme ultraviolet range (10 to 120 nanometers). Observation in the extreme ultraviolet range allows for fantastic diagnostics of plasma in the solar corona emitted by objects with a temperature from 10,000 degrees Kelvin just above the surface of the Sun to 2 million K in its corona. During the flare, the temperature of the corona can locally reach up to 10-20 million degrees`, the scientist describes.

In the case of short wavelengths, there are so-called emission lines. X-rays and extreme ultraviolet radiation are emitted by ionised atoms that have lost some of the electrons. These are ions of elements such as hydrogen, helium, carbon, oxygen, nitrogen, neon, sulphur, magnesium, silicon or even iron (of which there is less than 0.01 percent in the corona). `When electrons still present in ionised atoms collide with other, free electrons, they jump to a higher orbit, and then fall from it, emitting radiation`, he adds.

He explains that the ion of each element has its characteristic radiation, emission lines, often called its `fingerprints`. `When we see these lines, we can read from them not only the atoms that make up the corona and their amounts compared to hydrogen, but also what their temperature is. Due to the magnetic field of the Sun, individual areas of the corona can vary greatly in temperature, they may also contain ions with very different temperatures in a small area`, he says. `Our knowledge on this subject is limited by the spatial resolution of the instrument used, in the case SPICE, at maximum approach to the Sun, about 400 kilometres`.

`Our main goal is to detect where solar wind emerges in so-called coronal holes. The spectrometer has the advantage of being able to measure ion velocities because the spectral lines move left or right depending on whether the plasma is flowing towards the observer or in the opposite direction (Doppler effect). Starting from zero, the particles that form the solar wind quickly reach tens of kilometres per second, and further from the Sun - hundreds of kilometres per second. We want to understand the mechanism and location of this acceleration, that`s the purpose of speed measurements. There are different models of solar wind behaviour. The main purpose of observing molecules at different altitudes is to verify the theory and reject erroneous models`, he says.

How is SPICE built? The parabolic mirror focuses solar radiation on a narrow slot that `cuts` a thin fragment of the Sun (with a width corresponding to 400 kilometres on its surface when the satellite is in perihelion). The slot width determines the resolution of the instrument. The size of a single pixel is half slot width. There are several hundred such pixels along the gap. The light behind the slot falls on another small mirror with densely cut thousands of grooves, which acts as a diffraction grating. These grooves split the light of extreme ultraviolet light into different wavelengths. Thanks to the curvature of the second mirror, the resulting image focuses on the APS matrix. This matrix (detector) reacts to visible light, which is why a transducer is required that emits electrons, which in turn fall on the luminescent plate, and the resulting light - on the detector.

`It`s complicated, but the technology is already proven. The main mirror is moved by a small piezo motor, which allows to scan the observed object in the Sun. The length of the gap allows to observe about one-fifth of the radius of the Sun`s disk in the perihelion of the orbit, while the width of the obtained image depends on the number of mirror movements`, says Dr. Fludra.

He admits that a spectrometer covering the entire Sun could be built, but then it would have a lower resolution, and resolution is more important for scientists. In addition, the instrument itself cannot be too large due to the weight limit of the probe: its launch into the Sun`s orbit around the Sun requires much more fuel than to orbit around Earth.