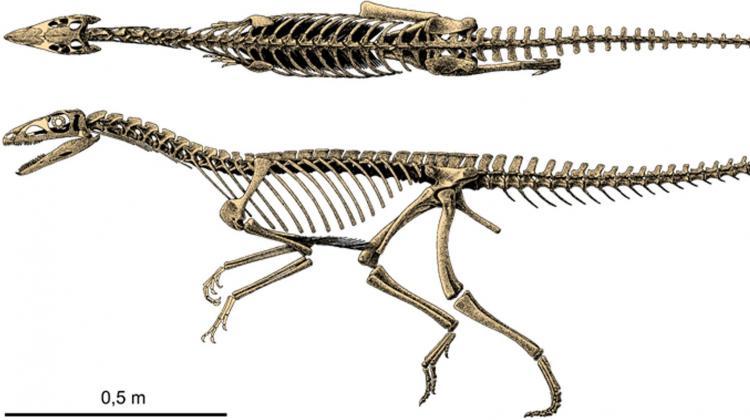 Dinosaurs evolved directly from four-legged animals, and not from bipeds as previously thought, researchers from the University of Warsaw determined. They arrived at this conclusion by examining the early dinosaur discovered in Krasiejów near Opole, the Silesaurus opolensis.

Researchers from the Faculty of Biology of the University of Warsaw published their latest findings concerning dinosaurs in the Journal of Anatomy, according to the university`s website.

The aim of the project of scientists from the University of Warsaw was to understand the way of movement of an early dinosaur, Silesaurus opolensis discovered in Krasiejów near Opole, against the background of the early evolution of the bird line. Silesaurus opolensis did not resemble other early dinosaurs known from that time. It had long slender forelegs and was reconstructed as a four-legged creature.

`We propose that the current hypothesis about the origin of dinosaurs is incorrect. Dinosaurs evolved directly from four-legged animals. As they turned into bipeds, the forelimb was released from locomotor functions and could be used for new purposes. Therefore, later dinosaurs rebuilt the muscles responsible for extending, retracting and bending`, says the article co-author, Dr. Mateusz Tałanda from the Department of Paleobiology and Evolution of the University of Warsaw, quoted on the University of Warsaw website.

The discovery of Silesaurus (that lived approx. 230 million years ago) divided the scientific community, we read in the University of Warsaw press release. Most researchers considered it to exhibit secondary adaptation to four-legged movement, treating it as a departure from the trend towards bipeds.

In the latest research, the scientists found that Silesaurus` front limbs were fully straightened and had reduced muscle associated with extension, retraction and bending. Researchers note that this anatomical solution was found in early sauropods - large, long-lived dinosaurs. Like the Silesaurus, their forelimbs served as front body support. Researchers from the University of Warsaw emphasize that large and heavy sauropods did not have to be so afraid of predators, which is why they could be slow animals.

Silesaurus, on the other hand, was the size of a large dog and had no other way to avoid predators, except by escaping. It relied mainly on his hind legs. Palaeobiologists from the University of Warsaw determined that the Silesaurus` femur was only slightly bent, while its ilium acetabulum was directed downwards. As a result, the legs were under the torso.

`This solution was previously known only among representatives of the crocodile line. Instead of a strongly developed iliofemoralis muscle, which dominates in the dinosaur pelvises, Silesaurus had well developed knee extensors and flexors. Its hind limb was well adapted to perform the main motive function, but in a previously completely unknown manner`, explains one of the authors of the article, Rafał Piechowski, a PhD student at the Department of Paleobiology and Evolution of the University of Warsaw.

Researchers believe that the locomotion of Silesaurus was not unique within the bird line. According to them, all early dinosaurs - not only the one known from Krasiejów - had forelegs tucked under the torso, acting as a support. The theory of university palaeobiologists is confirmed by preserved tracks from the Triassic.

Scientists from the University of Warsaw would like to make the Polish early dinosaur - Silesaurus opolensis - a model organism in the study of dinosaurs. Until now, the American Tyranosaurus rex, a popular tyrannosaur, had precedence in such research. In their opinion, Silesaurus has a chance to contribute much more to the studies of the evolution of early dinosaurs than its younger cousin.