Are There "Death Stars" Near Earth? 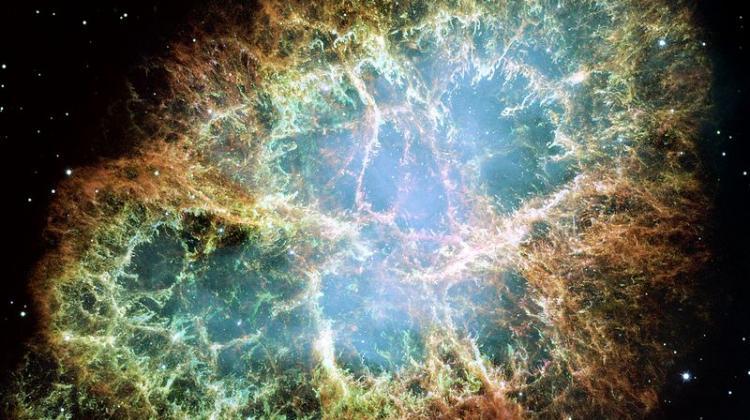 Crab Nebula. It is thought to be the remains of a star explosion in our galaxy almost 1,000 years ago (a supernova noticed by Chinese and Arab astronomers in 1054). Credit: NASA, ESA, J. Hester and A. Loll (Arizona State University).

A supernova explosion in our galaxy could lead to changes in the composition of our atmosphere and damage satellites or electronics on Earth, astronomers say. However, such cosmic explosions near the Earth are extremely rare, they add.

Small stars live for a very long time and are believed to pass quietly, without major fireworks. Larger stars are different. They can become very explosive with age. Their life may end with a cosmic explosion, e.g. a supernova or hypernova explosion. PAP asked astronomers if we should be afraid of such star explosions that may occur in our galaxy.

Recently in Nature, astronomers - including Polish scientists - described an extremely energetic gamma-ray burst (observed from Earth`s orbit). Dr. Michał Michałowski from the Adam Mickiewicz University says that particles of this burst formed extremely far from here. They travelled across the Universe for 4.5 billion years before we were able to register them. And they were photons a trillions times more energetic than the light we see from other stars.

Asked what would happen if such an energetic gamma-ray burst occurred in our galaxy, the scientist says: “That would be a problem. Such strong radiation could destroy the atmosphere of the Earth. Communication systems and electronics would certainly fail.” He explains, however, that such a gamma-ray burst somewhere near us is unlikely. “There are no stars around us that could explode to form gamma-ray bursts. In this respect, we`re probably safe,” he believes.

What about other types of cosmic explosions? Another author of the publication in Nature, Dr. Mariusz Gromadzki from the Astronomical Observatory of the University of Warsaw, asked about the stellar threats nearest to Earth, mentions Betelgeuse and Rigel, visible stars from the Orion constellation. “Both will explode and form supernovae over the next hundreds of thousands, maybe several million years,” he says. 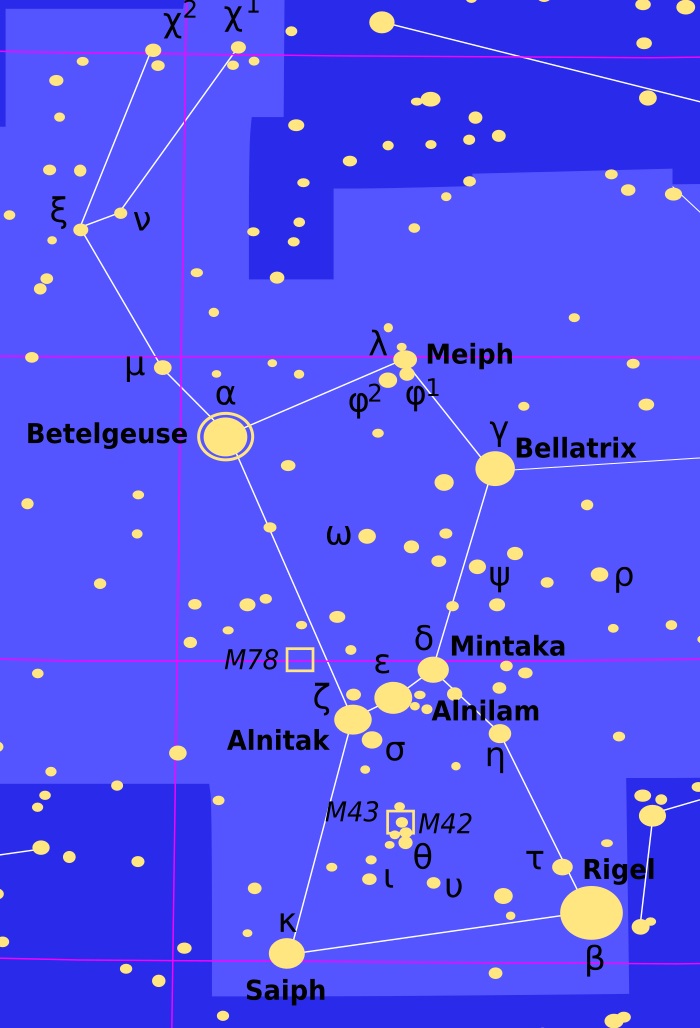 Betelgeuse and Rigel, stars from our galaxy visible in the Orion constellation will one day become supernovae. Source: Nicolas Eynaud [CC BY-SA]

Professor Joanna Mikołajewska from the Nicolaus Copernicus Astronomical Center PAS explains that in star bursts, the most dangerous thing would be high-energy radiation: gamma or X-ray. “Such radiation could change the composition of the Earth`s atmosphere,”she says. It could, for example, destroy the Earth`s ozone layer, which protects us from harmful UV radiation. The second problem is that under the influence of this energy from the explosion of the star, oxygen and nitrogen atoms in the atmosphere would merge into nitric oxide, the concentration of which in the atmosphere could increase. Too high a concentration of this gas could be harmful.

Professor Mikołajewska reassures, however, that, once they become supernovae, neither Betelgeuse nor Rigel will pose a threat to life on Earth. “They would have to be 10 times closer to destroy a significant amount of the ozone layer in the Earth`s atmosphere,” she says.

She adds that there are several other supernova candidates relatively close to Earth. They include Antares (Scorpio constellation) and Spica (Virgo constellation). “They are quite close, but they are not massive. There is nothing to worry about, they will not destroy life on Earth,” says Mikołajewska.

She adds that not only is she not afraid of the explosion of these supernovae, but she would even like to see such an event in the sky.

According to Dr. Gromadzki, the last supernova explosion in our galaxy was observed almost 1,000 years ago, in 1054. The dying star (SN 1054) was so bright that it was seen in the sky even during daytime. This was recorded in Chinese and Arabic chronicles. As a result of this explosion, the Crab Nebula was formed.

This explosion resulted in noticeable changes in the Earth`s atmosphere. Professor Mikołajewska explains that in ice cores taken from the Arctic, it can be seen that the concentration of nitrogen trioxide in the Earth`s atmosphere indeed increased in the mid-eleventh century. “These effects can be seen in research on Earth, but this does not mean that they were dangerous to life on Earth,” she says.

WHITE DWARFS, DO NOT EXPLODE! It would be worse, however, if a type of la supernova related to the thermonuclear destruction of the white dwarf was found closer to Earth. “These explosions are more energetic. Such an explosion that is dangerous for life on Earth occurs on average every 1 million - 1 billion years. It is not a frequent event,” says Prof. Mikołajewska. She adds that there is no type of Ia supernova candidate dangerous to humanity near the Solar System.

However, a type of Ia supernova explosion distant from Earth by up to 2,000 years could destroy satellites or disrupt electronic devices on Earth. “Today`s electronics are sensitive to cosmic rays,” she says. She admits that astronomers know star candidates that - in the event of a cosmic explosion - could cause problems in our world so heavily dependent on electronic devices.

The researcher points out that electronics on Earth can be harmed even by a powerful storm on the Sun. “Such a powerful solar storm occurred, for example, over 100 years ago (in 1859). Today, its effects would be much, much more severe than back then,” she says. 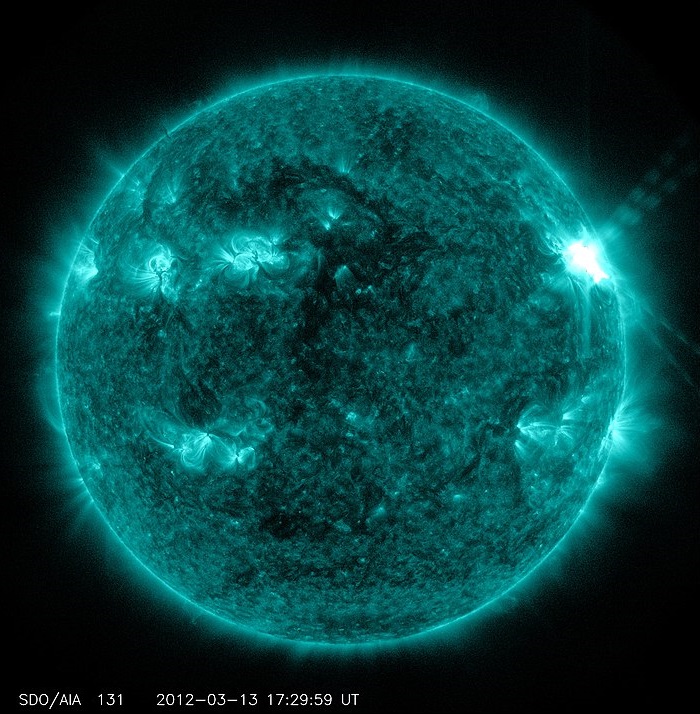 Photo: A solar flare can cause a geomagnetic storm. The flare from March 13, 2012. Photo: NASA [public domain]

She adds that in the history of our planet there may have already been an extinction event caused by a cosmic explosion somewhere in space. She said: “459 million years ago, in Ordovician, there was a great extinction on Earth; a significant part of life was destroyed. One of the hypotheses explaining what could have happened then assumes that the cause was a hypernova explosion.” Calculations showed that such an explosion should have taken place at a distance of about 5-6 thousand light years from us. “Astronomers have not yet found traces of such an explosion,” she adds.

THE SUN WILL MEET ITS END

The death of the star closest to us - the Sun - will definitely be a threat to Earth. Currently, the Sun shines due to the thermonuclear fusion (hydrogen synthesis into helium) at its centre. In about five billion years, this fuel will run out and the Sun will begin to transform into a red giant. Its helium nucleus will begin to shrink, and the outer layers will swell. The sun will get bigger, reach not only Earth`s orbit, but also Mars. Over time the entire shell will be discarded and form a planetary nebula, with a massive Earth-sized nucleus - a white dwarf - in the centre. “But there is nothing to be afraid of. Our civilization will not survive to this point anyway,” says Prof. Mikołajewska.

WHAT HAPPENS DURING SPACE EXPLOSIONS?

Why exactly do stars explode? Dr. Mariusz Gromadzki says that inside stars, in extreme conditions (at enormous temperatures and pressures) the nuclei of atoms "stick together", creating new, heavier elements. At some point, in the fusion reaction, the fragile balance between the forces that attract star matter and the forces that repel it is disrupted. This causes an explosion that scatters the newly created elements with huge energy. He said: “Some of the elements we are composed of would not have been possible without supernova explosions. There is a lot of truth in the saying that we are star children.”

Dr. Gromadzki gives an example of how a gigantic energy star burst can carry. “When two neutron stars merge, a lot of gold and platinum is formed! So much so that their mass is several times greater than the mass of the Earth.” He adds that at some point there is an explosion, and these whole chunks of platinum and gold `planets` are scattered like projectiles around the place of the cosmic collision.