Extremely bright cores of distant galaxies, powered by supermassive black holes visible in a form similar to four-leaf clovers, have been discovered by an international team of scientists.

Known as ‘quasars’ the team found a dozen, the light rays of which were bent by naturally occurring cosmic 'lenses'. 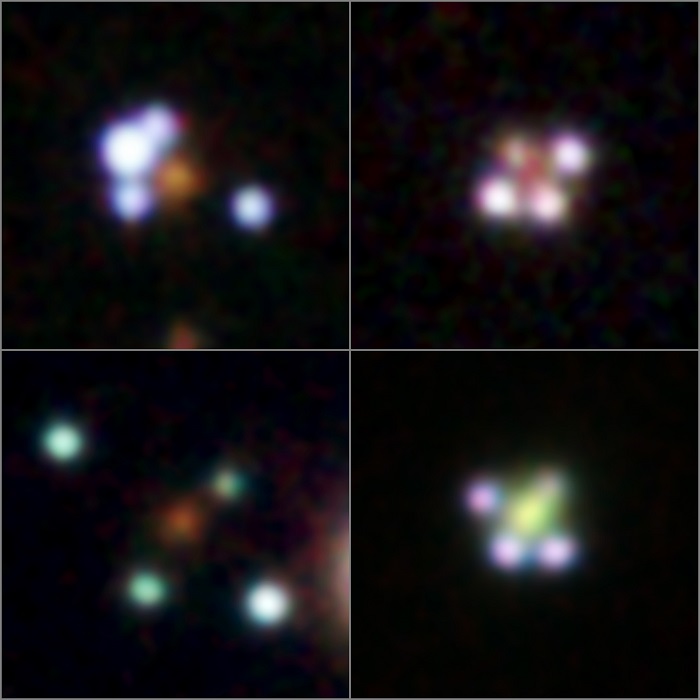 Four of the newfound quadruply imaged quasars. From top left and moving clockwise, the objects are: GraL J1537- 3010 or 'Wolf’s Paw'; GraL J0659+1629 or 'Gemini's Crossbow'; GraL J1651-0417 or 'Dragon's Kite'; GraL J2038-4008 or 'Microscope Lens'. The fuzzy dot in the middle of the images is the lensing galaxy, the gravity of which is splitting the light from the quasar behind it in to produce four quasar images. By modelling these systems and monitoring how the different images vary in brightness over time, astronomers can determine the expansion rate of the Universe and help solve cosmological problems. Credit: The GraL Collaboration

Over the past four decades, astronomers have observed about 50 such cosmic 'clovers'. The latest research, lasting just a year and a half, increased this figure by about 25 percent, showing how powerful a tool machine learning is, helping astronomers search for these cosmic singularities.

Lead author Daniel Stern, a research scientist at the Jet Propulsion Laboratory, managed by Caltech for NASA said: “The quads are gold mines for all sorts of questions. They can help determine the expansion rate of the Universe and help address other mysteries, such as dark matter and quasar +central engines+.

“They are not just needles in a haystack but Swiss Army knives because they have so many uses." 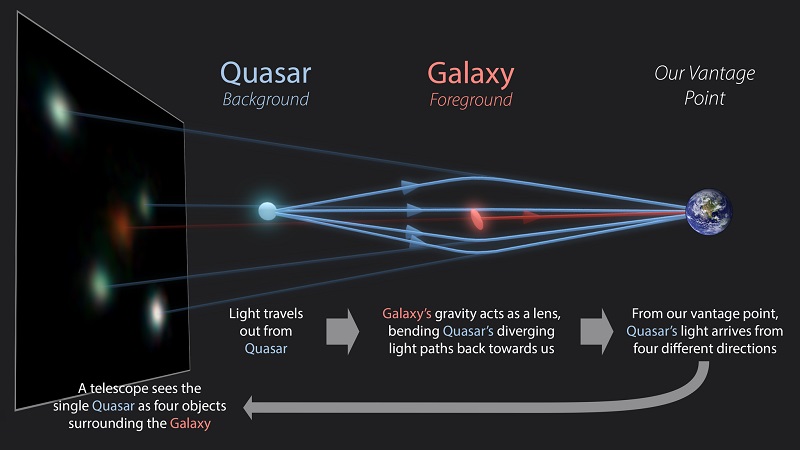 The diagram illustrates how quadruply imaged quasars are produced in the sky. The light of a distant quasar, lying billions of light-years away, is bent by the gravity of a massive galaxy between the quasar and Earth. The bending of the light results in the illusion that the quasar has split into four similar objects surrounding the foreground galaxy. Credit: R. Hurt (IPAC/Caltech)/The GraL Collaboration

Jean Surdej, visiting professor at the Astronomical Observatory Institute of the Adam Mickiewicz University in Poznań, who is involved in the research, teaches issues related to gravitational lensing. It consists of bending the path of light rays of a distant object, such as a quasar, by a massive galaxy located closer, which causes the formation of 'cosmic mirages'. He has been interested in research in this direction since 1983, when he proposed that the unusual brightness of the brightest quasars in the Universe could be the result of amplification by gravitational lensing. His team discovered and studied many cases of such cosmic mirages in the form of double images of the same quasar. Quadruple lensed quasars are much rarer.

In 2002, Surdej proposed using the sky survey carried out by the European Space Agency's Gaia satellite mission to search for such cosmic clovers. The international team, of which he is a member, has just announced in The Astrophysical Journal the discovery of a dozen such cosmic mirages, made with the help of artificial intelligence algorithms used to review Gaia data. Further astrophysical research of these newly discovered cosmic clovers should make it possible to independently determine the age of the Universe, the speed of its expansion (the Hubble-Lemaître constant) and its future.