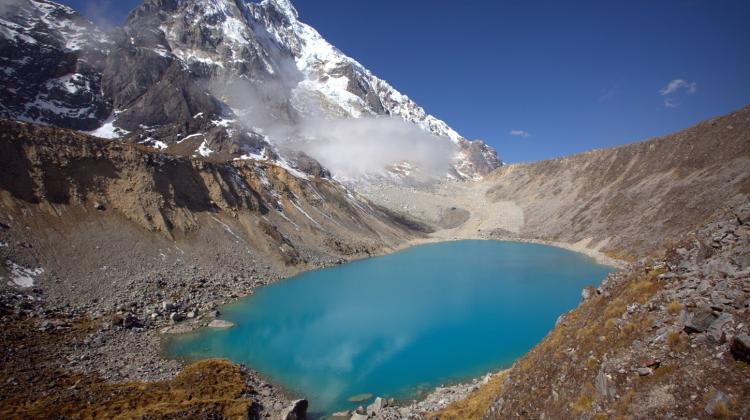 They dived and performed research using sonar in lakes located at an altitude of over 4,200 meters above sea level in search of traces of the activities of the Incas in the area of Machu Picchu. Specialists in the field of underwater archaeology from the Institute of Archaeology of the University of Warsaw and the Centre for Precolombian Studies of the University of Warsaw have just finished the first season of pioneering research.

The study was performed in cooperation between the Centre for Precolombian Studies of the University of Warsaw and the National Park of Machu Picchu. Previously, the Poles analysed the degree of stone destruction in this legendary city. They documented it using 3D laser scanning technology. This work was continued also this season, by the cooperating group from the Laboratory for Scanning and 3D Modelling, Wroclaw University of Technology, headed by Prof. Jacek Kościuk.

"Machu Picchu is not just the one, known around the world, rock city. It was surrounded by numerous temples, villages and other service buildings. Our goal is to survey them" - told PAP the project leader, Prof. Mariusz Ziółkowski.

This year, archaeologists investigated three of the seven lakes selected for studies at the National Park of Machu Picchu.

"Until now, sonar testing or archaeological dives have not been done at these altitudes" - emphasised the archaeologist. He added that the Institute of Archaeology of the University of Warsaw is one of the 9 institutions in the world that has full membership in Unitwin (University Twinning Programme Network for Underwater Archaeology). It is a network organized under the aegis of UNESCO, bringing together the universities units involved in training and research in the field of underwater archaeology.

"We believe that the Incas could deposit sacrificial offerings in those waters. Similar practices are known from Lake Titicaca located on the border of Peru and Bolivia, at an altitude of 3820 m above the sea level" - added Prof. Ziółkowski.

In Lake Titicaca, archaeologists found stone boxes in which the Incas lowered their sacrificial offerings to the bottom of the lake during the ceremony. Inside they placed gold and silver figurines, among other things.

This year\'s work in the lakes at the foot of the Salcantay was conducted by three specialists in the field of underwater archaeology - Magdalena Nowakowska, Maciej Sobczyk and diver-instructor Przemysław Trześniowski.

The study included sonar measurements of three lakes located respectively at altitudes of 4250, 4460 and 4750 m asl, and diving in the first lake. Archaeologists also carried out archaeological prospection in their vicinity. As a result, they managed to locate previously unknown archaeological sites, including rock engravings and a large, walled squares.

"They were used for commercial purposes that included breeding llamas and alpacas, as well as ceremonial purposes, at least a few hundred years before the formation of the State of the Incas. This confirmed the hypothesis about the importance of the alpine area for the Inca and their predecessors" - said Prof. Ziółkowski.

An important finding regarding the studied lakes is their depth. Until now it was estimated that they were approx. 10 m deep. Sonar tests showed that they were more than 25 m deep. Therefore, diving was limited to only one of the lakes.

"At such altitudes, safe immersion is possible only to a depth of approx. 10 m, and divers still need to be extremely cautious. And have reliable equipment" - noted diver-archaeologist Magdalena Nowakowska.

4 more lakes will be studied in 2017. Scientists plan to bore holes in the bottom of the reservoirs to retrieve biological remains (including pollen) for palaeoclimate research. This will give the researchers insight into the climate in pre-Columbian times. Perhaps they will also locate sacrificial offerings deposited in the lakes.

Current Polish research in the National Park of Machu Picchu is part of a larger project, called "Satellite sites of Machu Picchu". Apart from studies of lakes and their surroundings, the project work includes excavations at two ceremonial and religious sites: Chachabamba and Inkaraqay/El Mirador. The latter, studied by Peruvian-Polish team since 2013, turned out to be an astronomical observatory, used by the Inca priests-astronomers.

The work of the project is financed under grants NCN OPUS and PRELUDIUM and by the Peruvian Ministry of Culture. The Andean Research Centre of the University of Warsaw in Cuzco, research station founded in 2010, provides organizational and logistical support to the researchers. It is the only Polish scientific institution in South America.