Eye on the elk - the first results 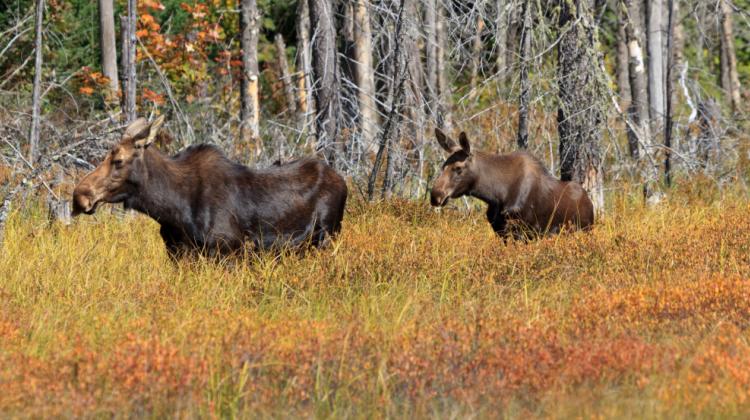 How far do elk wander and why? What environments do they seek? Which areas do they occupy in the winter, and which in the summer? Scientists pursuing two research projects in elk mainstays in the Biebrza Wetlands and Polesie provide multitude of new data on the subject.

In one project, led by Prof. Mirosław Ratkiewicz of the University of Bialystok, scientists collared 30 animals in the Biebrza Wetlands. Seventeen more were collared in the Biosphere Reserve of Western Polesie that includes Polesie National Park and surrounding forest district in the project conducted by Dr. Tadeusz J. Chmielewski and Weronika Maślanko from the University of Life Sciences in Lublin.

The animals have been fitted with GPS collars. They record the animal\'s position every hour and transmit data to the database using GSM modules so that scientists can accurately track the movement of animals throughout the day.

Data analysis has just begun. Researchers have already managed to determine that elk prefer the environment with high availability of food. "In winter, they regularly visit the pine forests, because during cold weather shoots of pine are abundantly available food for them. You can even say that by grinding pine, elk maintain their own pine gardens. Re-growing, young, branched shoots are additional food" - said in an interview with PAP Dr. Rafał Kowalczyk, Director of the Mammal Research Institute PAS in Białowieża, who works with the authors of both projects and administered tranquillisers and collared the elk.

The exception is winter, when the elk often come near human settlements. "During the night, they often go to midfield patches of forest, where they can remain for several days. They are attracted by the availability of food, especially in winter, when they search for shoots of pine, willow, birch and alder. We sometimes found elk a few dozen meters from the farms lying on outside a village. They were very well hidden. They also often dwelled in dense pine thickets, where they are really difficult to spot" - said Dr. Kowalczyk.

With data from the collars, researchers also determine the wandering distances of elk. In winter, these animals roam the average distance 1.5-1.8 km per day; in the spring and summer it is 1,7-2,6 km. Males are somewhat more mobile due to their reproductive behaviour, the search for females, especially in heat.

Scientists already knew that elk can migrate. However, they did not know details about migration distances and directions, or whether it applied to all animals. Telemetry allowed to determine that about two-thirds of elk seasonally migrate.

"This is due to the need to change the mainstay. In winter, elk dwell mainly in the forest, where they find food, in summer they migrate to more open, marshy areas, abounding in shoots of shrubs and herbaceous vegetation" - said the director of the Mammal Research Institute PAS. - "In Scandinavia, such migrations can be at a distance of several hundred kilometres. The data from the Biebrza indicate that with the change of seasons, centres of pastoral areas of elk move from 3 to 19 km, on medium - 7 km".

One-third of elk - usually males - are more settled and stick to the wooded areas or forest edges, where there is enough food. Cows migrate more often, they have greater energy needs due to the care for offspring. They need more and better quality food.

"The new information may help in managing elk populations" - said the expert.

"If hunting elk is permitted again in Poland, we must keep in mind that hunting in the area managed by the State Forests can also affect elk populations from the area of the national parks, for example Biebrza or Polesie, from where elk move to different areas in winter" - explained Prof. Kowalczyk.

"We need to keep this in mind when making decisions on the protection and management of elk populations. This applies in particular to genetically unique, relict Biebrza population" - he added.

New data can also help to better assess the size of the population - said Dr. Kowalczyk. He explained that elk are usual counted in winter. However, since they congregate in forest areas, especially in the pine forests, their often high density in winter does not reflect the actual status of the population throughout the year.

With the telemetry data, researchers also found that among the elk living on the Biebrza even every fifth animal may die each year. Males are more affected, their mortality rate reaches 30-40 percent (among females it is approx. 10 percent).

Most elk die in the end of winter and early spring, when - especially after prolonged winter - the animals are very weak. Another period of increased mortality is the time of heat and autumn migration, when animals die at the hands of poachers (looking for males with antlers), and on the road, as a result of collisions with cars.

Research on elk using GPS collars has already been conducted in America and in Europe, mainly in Scandinavia - noted Dr. Kowalczyk. "In Central and Eastern Europe such research has not been conducted. And it is very necessary, because the elk population grows and gradually spreads throughout Europe. In Poland, moratorium on the hunting of these animals introduced in 2001 was a contributing factor. Elks return to the formerly occupied areas and begin to colonize neighbouring countries. More and more elk with Polish migrate across our western border"- said Kowalczyk.