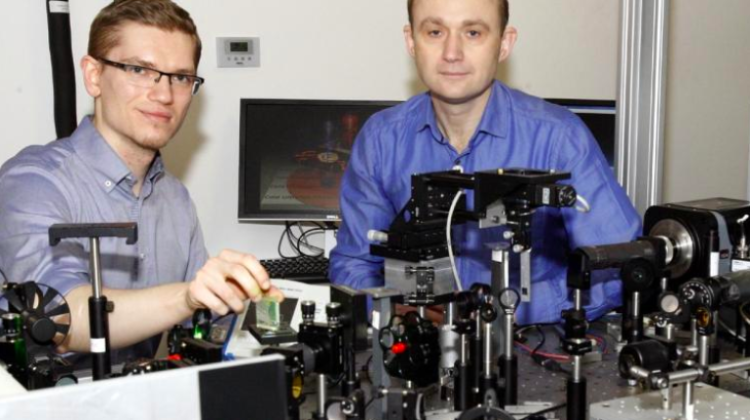 Information storage in computers will be much more efficient thanks to the solution developed by physicists from the University of Bialystok. The solution has now been awarded patent protection by the US Patent Office.

"The method of ultrafast photomagnetic writing developed by physicists from the University of Bialystok: Dr. Andrzej Stupakiewicz and Dr. Krzysztof Szerenos has been awarded patent protection by the American Patent Office" - the University of Bialystok announced on its website. The university is the owner of the invention. This is the first American patent in its history. The entire patent procedure took only one year.

The work of the team from the University of Bialystok appeared in the journal Nature in 2017. Researchers explained that they managed to bypass the information writing speed and efficiency barrier. Thanks to this, data on computer disks can be saved a thousand times faster than before, and in addition, computers will be more energy-efficient.

In their publication, researchers from Poland showed that there was a non-conductive material (cobalt-substituted yttrium iron garnet, YIG: Co), in which one laser pulse is sufficient to switch one bit. Switching the bit in this material is a reversible process, you can do it many times. Prof. Stupakiewicz and Dr. Szerenos said that when saving 1 bit of information, the system would use very little energy - up to 10,000 times less than the latest STT-MRAM technology, and even one billion times less than today`s hard drives.

According to the representatives of the University of Bialystok, the patent already contains some of the results published in Nature, as well as new results that present the concept of building a data storage system and parameters of the information carrier. "The patent contains 17 reservations that will allow to effectively protect the invention" - representatives of the University of Bialystok inform.

The essence of the invention "Ultrafast photomagnetic recording in a dielectric medium using anisotropic ions and effective Gilbert damping" (US 10,037,777 B1) is a method and system for photomagnetic recording using a transparent dielectric medium. Innovation of the invention consists in applying femtosecond polarized pulses of laser light of a specific wavelength to write and read data in a non-thermal manner.

The authors expect that the US patent will create an opportunity to initiate revolutionary changes in the performance of future computer systems with regard to digital information storage and processing.

"Leaders in information technology, and in particular magnetic memory systems, operate mainly in the US market, which is why we wanted patent protection in the US" - explains Prof. Andrzej Stupakiewicz. He adds: "Obtaining a patent in a prestigious and extremely competitive IT industry confirms the innovative nature of the solution, and this places the University of Bialystok in a small group of Polish universities with innovative achievements on an international scale".

Dr. Krzysztof Szerenos comments: "There is no similar solution in the world that would allow to cross the barrier of information writing speed, while effectively reducing the unnecessary heat".

But the path to commercialisation can be long. The authors of the invention hope to attract investors from among the leading magnetic memory manufacturers and work with them to implement the new method. The grants realized at the Faculty of Physics of the University of Bialystok will help.

"This year, we acquired domestic and European funds for several scientific and R&D projects - reminds Prof. Stupakiewicz - Grants will allow us to expand the equipment infrastructure, conduct new research and develop international cooperation towards the development of a new recording technology".

The patent procedure was co-financed from grant funds and the "Incubator of Innovation+" program co-financed from EU funds under the Intelligent Development Operational Program and run by the Eastern Technology Transfer Centre of the University of Bialystok.

So far, scientists from the University of Bialystok have obtained a total of 3 foreign patents - 1 American and 2 European (for inventions developed at the Faculty of Physics and the Institute of Chemistry). In addition, 18 inventions were granted patents by the Patent Office of the Republic of Poland.