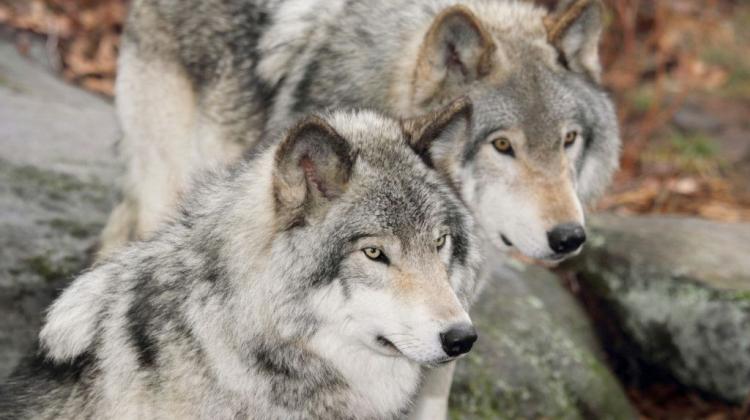 Wolves in Western Poland are doing better, according to the result of years of research presented in "Mammal Research". Taking them under protection in Poland proved to be effective, says the lead author of the study, Dr. Sabina Nowak from the Association for Nature "Wolf".

After World War II wolves in Western Poland were rare, and in some years even not observed at all. They began to settle there after 1998, when they gained the status of protected species in Poland. "We have shown that the protection helped; that wolves needed time" - said Dr. Nowak, who, together with Dr. Robert Mysłajek from the Institute of Genetics and Biotechnology, Faculty of Biology, University of Warsaw examined the dynamics of the wolf population development in the west of the country.

Their work shows that a few years after covering wolves with protection, their numbers in Western Poland began to grow, and over the following 12 years increased from a few to approx. 140 animals. In 2012 in western Poland, there were already 30 wolf family groups, each of which consisted of an average of 4.8 animals.

"Even in the early 21st century there was a time (2000-2004) that the Western Poland population of wolves could not bounce back. But then we began to observe its rapid, exponential growth. Our predictions that species protection will allow these predators to settle also in Western Poland proved accurate. At the same time, it turned out that some experts were wrong in suspecting that the full protection of wolves will lead to the escalation of poaching, and the associated mortality will block the development of the population" - said Dr. Nowak.

The research on wolves was conducted from 2001 to winter 2012/2013 in all major forest complexes in the west of the country, including forests: - Piaskowa (Cedynia Landscape Park), Goleniowska, Drawska, Bydgoszcz, Notecka and Rzepińska, as well as in forests: Koszalin, Wałeckie, Sarbskie, Tuchola and Lower Silesia.

WOLF ACCOMODATION GETTING HARD TO FIND

In the analysed period, the area continuously occupied by wolves increased from 600 to almost 11 thousand sq km. The area where these predators can be found occasionally increased from 900 to 3,600 sq. km. The woods are getting crowded: the distance between the territories of packs decreased more than tenfold, from 260 to 25 km.

Territories wolf groups are more closely packed in the forest complexes and occupy new territories. After 12 years of recolonisation of forests in Western Poland, wolves have taken approx. 30 percent of useful habitats.

"At the beginning of the process of settling the territories of packs were distant from each other, wolf founding pairs arrived from afar and occupied the centre of a large forest complex. With time, however, the number of groups living next to each other increased, for example in Lower Silesia Forests, where in 2012 we found seven wolf families" - said Sabina Nowak.

When several family groups live in the same forest complex, neighbours "negotiate" virtually non-stop. Various factors determine the area and location of territories of individual groups: the size and distribution of wild ungulates, the actual size of the packs, as well as the age, experience and strength of its members, especially the parental pair.

Genetic analyzes indicate that most wolves that settled in the western part of the country, are the descendants of the packs living in north-eastern Poland. These areas also attract wolves from the German (Saxon) population from the lands close to our border.

The authors have shown that wolves had two strategies to recolonise Western Poland. One was based on long journeys of "lonely pioneers." "Long-distance dispersion (or displacement), applies to a small number of juveniles that embark on hundreds, or even thousands of kilometres journeys. They are either typical wanderers, mostly males that wander very far and then have problems finding a partner - or wolves, which find a partner at the beginning or along the way, wander together and have greater chance of finding a habitat in remote places" - said Sabina Nowak.

"More young wolves will, however, settle closer to home. It is safe, and when it comes to males, it is easier for them to find females closer to the source population" - said the researcher, explaining the second expansion mechanism.

For a wolf population to develop, it must have adequate food base, namely wild ungulates. "And their numbers grow in recent years - emphasised Sabina Nowak. - It is getting warmer and an important mortality factor, snowy and cold winters, which limited the survival rate of wild boar, deer and roe deer, is not that important anymore. There is also no limitating factor associated with the scarcity of food, because food is in abundance around forests. Subsidized corn fields growing around the forests contribute to the huge increase in population of boars, for example".

Nowak believes that in the future wolves will occupy all available habitats, if the reproduction and growth rates of the population will compensate for mortality.

DEATH ON THE ROAD

The authors also confirmed that the main threat to wolves is man. Of the 28 wolves found dead during the study, 18 were killed on the roads (mostly young males), seven fell prey to poachers, and two died from disease and other natural causes.

Wolf mortality associated with human activity increases from year to year, the authors noted. Animal collisions with vehicles are more common due to more traffic and better surface of roads, allowing for fast driving.

In view of the large scale of such accidental mortality, it is important for people to limit the pressure on wolves - emphasised Sabina Nowak. "The point is that we should be willing to continue to protect this species, that foresters should accept the presence of these animals in the forests and understand that this predator is their ally in protecting the forest from excessive feeding of deer. Without the support of foresters, without the express negative attitude of foresters towards poaching, the situation of wolves could worsen any time" - she explained.

The numbers of wolves grow, but they are not necessarily troublesome neighbours for people - the researchers believe.

"The most serious conflict that accompanies the presence of wolves concerns predation on livestock. However, knowing where wolves settle, and monitoring the development of their population, we can prevent conflicts, informing farmers about the presence of predators and of the methods they can use to protect inventory from wolves" - said Sabina Nowak.

He adds that for farmers who have crops near the woods, settled pack can be a great support. Wolves in fact hunt mainly wild ungulates, "which now feed on the fields without restrictions, and which hunting is not able to manage" - she said.

It is estimated that approx. one thousand two hundred wolves live in Poland today - the highest number since the end of World War II.