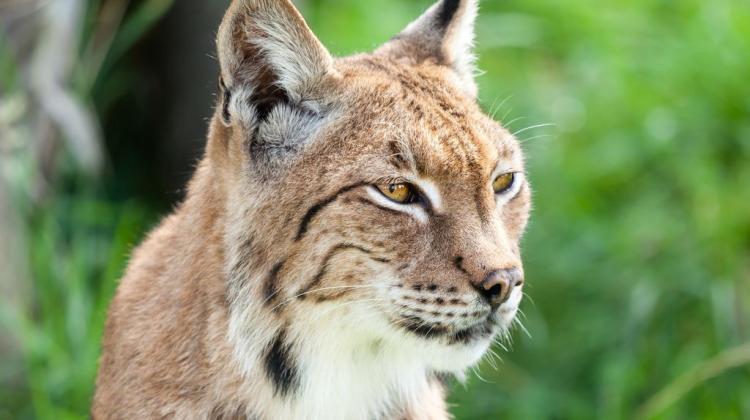 Political transformation in Poland brought not only the increasing wealth of Poles, but also ... better times for the lynx, which are less likely to die due to the fault of man. This is evidenced by the results of 20 years of research in the Białowieża Forest, published in "Mammal Research".

Eurasian lynx is one of the largest predator in Europe, and a rare and protected species in Poland. One of the few places where it can be found is Białowieża Forest. In the early 1990s, researchers from the Mammal Research Institute of the Polish Academy of Sciences began telemetry observations of these predators that continued for two decades. Researchers would catch lynx and put special collars with transmitters on them. After releasing the animals, they were able to track which areas and the environment these animals use when they are active and how they move.

The study was conducted in the years 1991-1996 and 2004-2011 - in two periods between which the Poles became more wealthy, and lynx lived to see the formal protection in the country.

Researchers analysed the data from these studies, as well as additional information, to determine the mortality for lynx: its extent and causes. They checked how these animals often die of natural causes, and how often they are killed by man, especially because of poaching and collisions with vehicles.

Over the course of 20-year monitoring, lynx mortality significantly decreased - told PAP one of the authors of the publication in "Mammal Research", Dr. Rafał Kowalczyk from the Mammal Research Institute. At the beginning of the project it was approx. 33 percent, which means that each year one third of animals died, later it stabilized at approx. 16 percent, which means that one in six animals is killed.

Why the change? Scientists explain it with the improved economic situation of Poles. The data show that during the first study period, lynx died the mainly due to human activity, for example caught in the traps poachers were wetting for ungulates. "After the transformation, the economic situation was bad, people earned little, and meat was expensive. Poaching was one of the forms of obtaining meat" - explained Dr. Rafał Kowalczyk.

Poaching decreased with the increase in the scale of society\'s wealth. "We started to earn more, people would less often go into the woods to search for food. That reduced the contribution of anthropogenic factors to lynx mortality. These factors predominated in the 1990s; later, the natural factors turned out to be more important" - said the biologist.

Do these results indicate good prospects for Polish lynx? "Good to the extent of decreased mortality and human impacts on the lynx, which are now more likely to die from natural causes. That\'s the point: nature itself should regulate population mortality" - said Dr. Kowalczyk.

At the same time Białowieża studies confirm the harmful effect of forest fragmentation on forest predators. This phenomenon consists in once extensive forests turning into a forest oases among meadows, fields and asphalt.

Lynx are loners; they occupy large territories, and they need great forests to live. For the lynx subpopulations of Białowieża, Knyszyńska or Augustowska Forests to flourish, they must be in contact, exchange genes. Meanwhile, the areas between the forests, with lots of roads and buildings, are traps. Lynx that go there are risking their lives.

The exchange of individuals between different areas is not sufficiently effective, as confirmed by genetic studies of Polish lynx. "We are already seeing effects: genetic variability of lynx living in Polish forests is dropping, especially when compared with the lynx living in the forests stretching from Latvia through Estonia far into Russia" - said Dr. Kowalczyk. The reason for this is probably increased mortality of lynx in areas between large forests.

This is further evidence of the importance of migration corridors: wooded strips of land that offer safety and ecological connectivity between forests inhabited by wild cats, wolves, bison and other animals that need vast space.