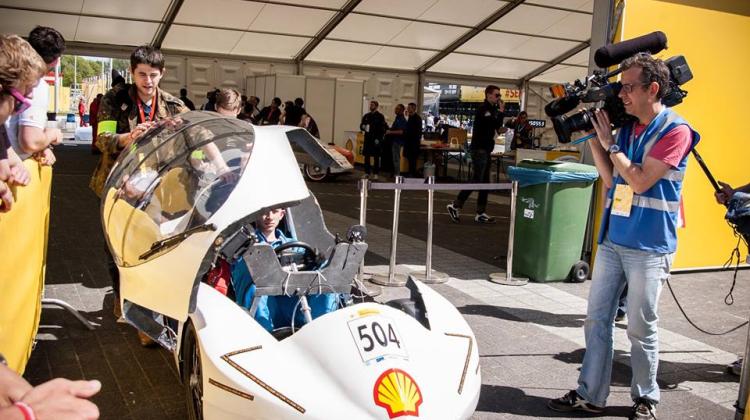 Students from Warsaw University of Technology SKAP2 team won the silver medal in international competition Shell Eco-marathon which ended on May 24 in Rotterdam. Their urban car "PAKS +" drove 317 km on one litre of fuel.

Shell Eco-marathon Europe is one of the most challenging engineering student competitions in the world. The task of the teams participating in the competition is to design a vehicle that will travel the longest distance on an equivalent of one litre of fuel or 1 kWh. During the event, young designers have an opportunity to test the vehicles they have designed and built.

Students from Warsaw University of Technology SKAP2 team took second place in the Urban Concept category of gasoline powered vehicles. Their car "PAKS +" drove 317 km on one litre of fuel. They were beaten by the team from the French Lycee Louis Delage, who obtained the result of 517 km/l.

"Unfortunately, we can not compete with the French, they are one level of technology ahead of us. However, we have plans for the future, so that maybe in two or three years we can catch up with them" - told PAP Adrian Pawełek from the Warsaw University of Technology team.

In 2013, his team won 1st place in its category of vehicles, with a score of 334.2 km on 1 litre of gasoline. Last year, the team’s vehicle reached a better result, but failed to defend the place on the top step of the podium. The distance of 376, 5 km/l of gasoline gave the team the second place, behind team from France, who drove 468.8 km on 1 litre.

Among urban vehicles driving on battery power, tenth place went to the Green Arrow team from Warsaw University of Technology, who drove 43 km/kWh. The winners were the French team ISEN Toulon/SCS, with the result 309 km/kWh.

In the same category, but among hydrogen cars, seventh place went to the team Smart Power Urban from Silesian University of Technology, who reached 118 km/m3. First place in this category took the team La Joliverie Polytech Nantes with the result 373 km/m3.

In the "Prototype" category among petrol cars, the team Iron Warriors from Łódź University of Technology achieved a very good result, 641 km/l. "This is the best result of Polish team this year. We are very satisfied and happy, because it took us a long time to achieve such a result. We are in competition for the third time, but two years in a row we had a lot of technical problems and we failed to finish. This year we focused on simplicity, proven solutions, a lot of testing and it worked" - said Szymon Madziara from Łódź University of Technology. Winners were the French team TED from AIRBUS HELICOPTERS Centre de Formation Technique, who managed to drive 2308 km on one litre of fuel.

In the same category, but among battery-powered cars, the team Smart Power from Silesian University of Technology was eighth with 504 km/kWh. In this category, the winners were the German "TUfast Eco Team" from the Technische Universitaet Muenchen, with 863 km/kWh.

The event, organized for the 30th time, was attended by more than 3 thousand participants, supported by more than 50 thousand fans. Poles are present at the Shell Eco-marathon Europe since 2006. A decade ago one team took part in the competition, representing the Vehicle Aerodynamics Student Club (SKAP, Studenckie Koło Aerodynamiki Pojazdów) at Warsaw University of Technology. Shell Eco-marathon is now a global initiative that also takes place every year in the United States and Asia. The 2016 competition will be held in London.