Death cap - the most poisonous organism living in Poland 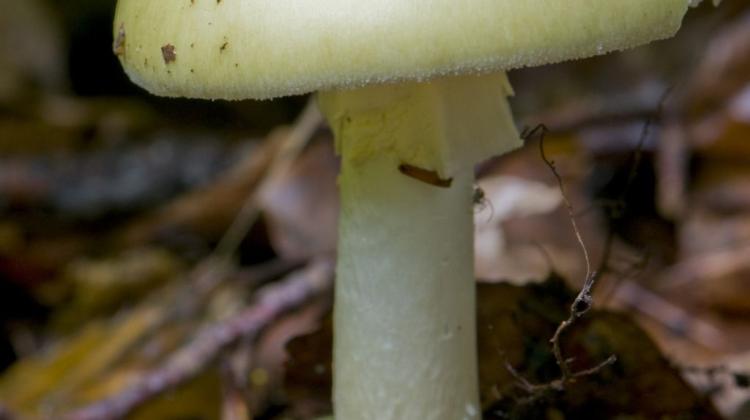 Amanita phalloides, commonly known as death cap, is the most poisonous organism living in Poland. One fruiting body can poison an entire family. Our body can not break down toxic substances it contains, told PAP Prof. Andrzej Grzywacz of Warsaw University of Life Sciences.

Amanita phalloides contains many toxic substances, which break down only at temperatures above 260-300 degrees Celsius. Therefore, the human body is unable to fight them.

" It is not true that this species can be found, cooked and eaten. It does not apply to this species of mushroom. A single fruiting body - 50 g - can poison an entire family. In Poland, in nature there is no other poison so strong" - said Prof. Andrzej Grzywacz from Warsaw University of Life Sciences.

Amanita phalloides is quite insidious, because does not show that it is the most poisonous organism found in Poland. "It smells good, insects and snails feed on it. It’s cap has a greenish color, slightly similar to green-cracking Russula and sometimes yellow knight" - explained the scientist.

He reminded that all mushrooms are hard to digest. "Children , the elderly and the sick should not eat mushrooms. Even the best and tastiest like mushrooms, boletes, chanterelles, saffron, suillus" - he stressed.

Also, he advised against picking mushrooms growing along the roads, military training grounds, in chemical disaster areas. "Fungal hyphae can reach 200 km below the surface. The mycelium absorbs various substances from the soil, sometimes poisonous and harmful substances. This is why mushrooms picked at such places can poison you, even if they are not a poisonous species" - said Prof. Grzywacz.

Sometimes, after many years, it turns out that some species of mushroom should not be approved for marketing. French and German toxicologists reported recently that the long-term consumption of yellow knight can lead to serious health problems.

"Another big problem is the hallucinogenic Psilocybe semilanceata, commonly known as the liberty cap, found in forest meadows. We know of cases of suicide, death under mysterious circumstances, which occurred under the influence of disorders induced by the mushroom" - said Prof. Grzywacz.

What substances beneficial to human do the mushrooms contain? "Some vitamins, trace elements, rarely found in other products, such as lithium. Above all, however, it is about the taste" - said the scholar.

The Polish forests there are over 12 thousand species of fungi. It is the most numerous group of organisms after insects. There are more than a thousand edible mushroom species. More than 250 species are poisonous, including some that are very dangerous, deadly poisonous.

For researchers, the most interesting group are the mycorrhizal fungi that live in symbiosis with the roots of trees. "There are species of fungi that live only with a tree species. Suillus tridentinus functions only works with stone-pine, and suillus flavidus only with larch. Some species are less fussy and form a symbiotic relationship with pine, oak, spruce. Pine has about 50 species of fungi, with which it forms a symbiosis" - said Prof. Grzywacz.