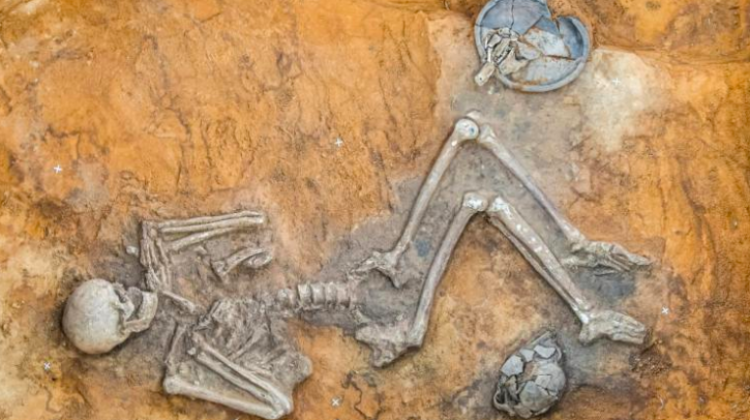 Cultural achievements from the Iberian Peninsula reached the territory of Poland, Sicily and the British Isles in pre-historic times. Scientists in Nature report about the migration and transmission of Bell-Beaker culture artefacts in Europe.

The research project covered the data obtained during the studies of 400 prehistoric skeletons from all over Europe. The research team led by scientists from Harvard University (USA) included 144 archaeologists and geneticists from centres in the US and Europe. Among the authors of the publication are scientists from the Institute of Archaeology of the University of Wrocław - Mirosław Furmanek, Agata Hałuszko and Maksym Mackiewicz, as well as Elżbieta Haduch from the Jagiellonian University and Piotr Włodarczak from the Institute of Archaeology and Ethnology of the Polish Academy of Sciences in Kraków.

In another article in the same issue of Nature, another team of scientists coordinated by Harvard researchers presents the results of sequencing over two hundred prehistoric human genomes. The researchers' goal was to trace the beginnings of agriculture in Europe.

These are the largest studies to date based on sequencing prehistoric DNA.

About 4.7 to 4.4 thousand years ago, a new type of pottery appeared in Western and Central Europe - bell-shaped, elongated beakers. The earliest items of this type were made by the inhabitants of Iberia. The name of the entire culture comes from the shape of these beakers. The beakers reached the territories of present day Poland, Sicily and the British Isles.

The discoveries of these products started a debate that has continued for more than a hundred years: did they spread throughout Europe as a result of a large scale migration of people and the similarity of finds results from the existence of the "beaker people" with a strictly defined ethnic identity, or was it a result of the existence of "fashion trends" associated with certain types of luxury items among the then social elites, reads the University of Wrocław press release.

Over the many years of research, various places (including France, the Middle East, Egypt, the Netherlands or Central Europe) were believed to be the cradle of this phenomenon. Researchers often pointed to the Iberian Peninsula, where some elements of material culture appeared early.

According to the authors of the publication in "Nature", it was impossible to confirm the genetic transmission. This allows to assume that the cultural transfer - at least initially - occurred without migration. As they emphasize, this is the first example transferring culture as such, without a mass movement of the population.

The research results show that the bell-beaker culture initially spread from the Iberian Peninsula to Central Europe, with no visible migration accompanying it. Later it spread from Central and Western Europe to other places with migratory movements.

It was first transported by the local people to the British Isles, where about 90 percent of the local population was replaced. The Neolithic builders of Stonehenge disappeared, and populations from the areas of today's Germany and the Netherlands appeared in their place.

This population exchange was almost complete in the Y chromosome, which is passed on in the male line.

"Our samples from several sites in Lower and Upper Silesia were analysed in the Reich Laboratory of David Reich from the Department of Genetics of Harvard Medical School in Boston by the team ld by David Reich and Iñigo Olalde" - explains Dr. Furmanek in the materials sent by the University of Wroclaw. - "The largest number of samples comes from the extremely interesting Bell-Beaker culture cemetery in Kornice, in the commune of Pietrowice Wielkie in Silesia. With regard to these burials, we have also obtained interesting information about family relationships between some of the dead. We have identified a father and two of his children - a son and a daughter".

A similar migration wave reached northern Italy and the Iberian Peninsula. These migration waves probably went hand in hand with the expansion of Celtic or Proto-Celtic languages.