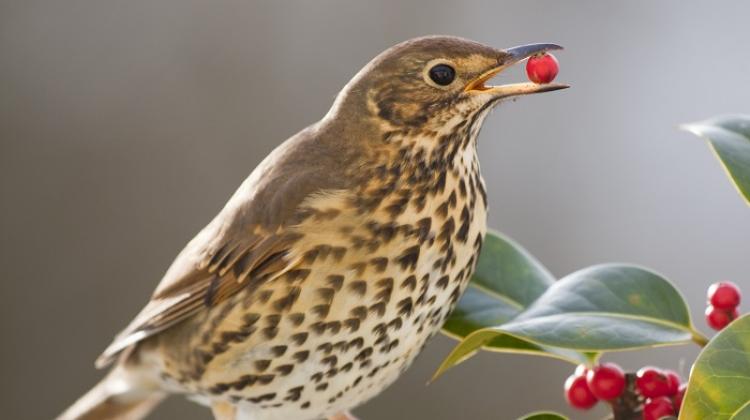 By spreading seeds over long distances and to new areas, migratory birds theoretically can help plants gain new ranges in the situation of global warming.

And yet the vast majority of plants from the forests of Europe are spread by birds migrating to warmer regions in the south, an international research team have found.

One of them, Dr. Przemysław Kurek from the Faculty of Biology of the Adam Mickiewicz University in Poznań, said: “As a result of global warming, optimal climatic conditions for many species are moving to cooler areas, thus enforcing the redistribution of life on Earth.

“Mobility allows many animals to reach areas with a new, suitable climate. However, plants can not move, so spreading their seeds over long distances is the key to their redistribution and adapting to climate change'.

Lead author Juan Pedro González-Varo from the University of Cádiz (Spain) added: “Contemporary climate change is so fast that many plants require dispersal distances far beyond those that normally take place locally. This is where migratory birds can play a major role, as they are capable of dispersing seeds over tens of kilometres.”

To assess the plants' chances of 'escaping' climate warming thanks to migrating animals, the 18 scientists from 13 European institutions examined the groups of birds that eat fruit and then spread seeds.

The studied interaction networks included information about the plants' fruiting periods and bird migration patterns to characterize the potential for spreading seeds over long distances in cooler or warmer directions.

The research was carried out in 13 woodlands across Europe, including a total of 949 interactions between 46 bird and 81 plant species..

The authors of the study discovered that only about one-third (35%) of plants from the studied places are dispersed by birds migrating in spring to the north. The vast majority (86%) of plants are dispersed by birds that migrate to warmer areas in autumn. The study also shows that plants with the highest potential for spreading in the cooler direction belong to species that bear fruit when the birds migrate to the north in spring.

Although all migratory birds in Europe migrate in the same direction (from the south to the north in spring and from the north to the south in autumn), the study has shown that birds with the greatest potential for the dispersal of European plants to cooler latitudes are the species that winter in central and southern Europe or North Africa (north of Sahara).

These species are robins, blackcaps, blackbirds and various species of thrushes, which are generally very common and abundant on the European continent. Some of them are heavily hunted in the Mediterranean Basin, both legally and illegally.

Dr. González-Varo said: “We believe that our study gives added value to these species, since they would be responsible helping European plant communities respond to climate change.”

Dr. Kurek added: “This limited potential for spreading to new areas will have consequences for the composition of future forest areas, because most species may not be able to cope with rapidly growing temperatures. Therefore, our research is crucial to understanding the decreasing biodiversity due to climate change.”

Find out more on the source publication page and in the video.