Hygiea a Contender for Smallest Dwarf Planet in Solar System 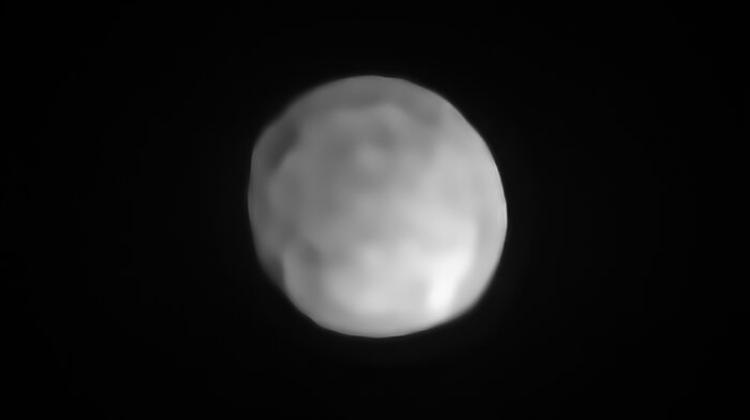 Scientists say they have found what could be the solar system’s smallest dwarf planet.

According to researchers from the European Southern Observatory (ESO), the Adam Mickiewicz University in Poznań and the University of Szczecin, the object Hygiea has features that potentially qualify it as a dwarf planet.

Hygiea orbits the Sun as an object in the main asteroid belt. Using an imaging instrument called SPHERE which sits on top of a Very Large Telescope (VLT), scientists were able to accurately determine the size of the planet-asteroid, its shape and some surface elements.

Although there are eight planets in our system, and hundreds of thousands of asteroids, scientists distinguish an intermediate group between both, called dwarf planets, depending on their radius.

And whereas planets can have radiuses from several to tens of thousands of kilometres, asteroids are smaller, from hundreds of kilometres to several meters.

The criteria for defining a body as a planet depends on several conditions. The object must orbit the Sun (not be a moon), be large enough to achieve a spherical shape under the influence of its own gravity and clear other bodies of similar size from the area around its orbit.

If the latter conditions are not met, astronomers classify the object not as a planet, but as a dwarf planet. Currently, there are five officially recognized dwarf planets: Ceres, Pluto, Haumea, Makamake and Eris. Of these, only Ceres orbits in the main asteroid belt, while the other objects are on the outskirts of the Solar System in the so-called Kuiper belt.

According to the latest measurements, Hygiea is just over 430 km in diameter. For comparison, Pluto measures nearly 2,400 km and Ceres nearly 950 km. It turns out that despite its moderate size, Hygiea has a spherical shape. In addition, there are no large impact craters on its surface.

Hygiea is the main member of the namesake asteroid family of nearly 7,000 objects. They are all believed to be remnants of one parent object. According to numerical simulations, there was a frontal collision of the parent object with a body with a diameter of 75 to 150 km. This could have happened 2 billion years ago. The parent object was smashed to pieces, and then the remaining pieces formed Hygiea and thousands of small asteroids from its family, which together have a volume comparable to a body with a diameter of 100 km.

Currently, only two large craters have been identified on the surface of Hygieia, despite having observed as much as 95 percent of its surface. However, none of them could have been caused by the above collision, they are simply too small.

According to the researchers, thanks to advances in astronomical observation technology (including new generations of adaptive optics) and numerical calculations, we now have the opportunity to study asteroids from the main belt at unprecedented resolution, bridging the gap between previous ground observations and interplanetary probe missions.