Archaeologist: Many thousands of years ago life flourished in the Gobi desert 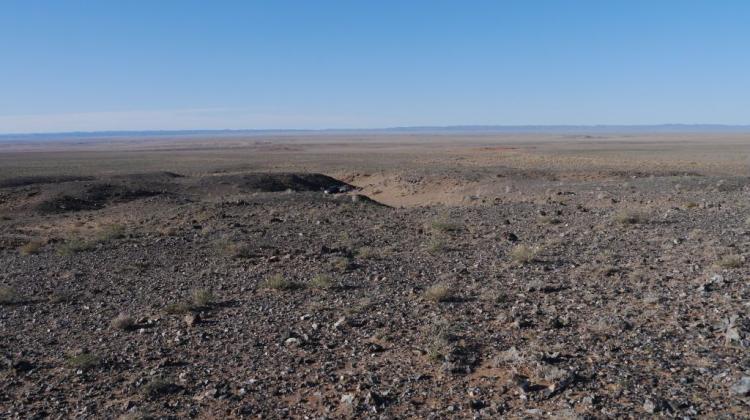 Many thousands of years ago life flourished in the Mongolian Gobi desert. Archaeologists from Wrocław discovered traces of a rich settlement from the period of the Stone Age. Prof. Józef Szykulski told PAP about the results of the excavations.

Currently, the Gobi is the second largest desert area in the world. The area is completely devoid of road infrastructure and inhabited only by a few nomadic families. The study shows, however, that many thousands of years ago, the conditions in the area were more favourable to life than now.

Archaeologists found many traces of old camps - said in an interview with PAP Prof. Józef Szykulski from the Institute of Archaeology, University of Wroclaw, who leads the project together with Prof. Mirosław Masojć.

Camps were located on the shores of lakes - now dried. Based on the findings, researchers concluded that thousands of years ago richness of species of animals lived in the study area, benefiting the ancient inhabitants of the desert.

Archaeologists discovered mainly stone tools and the waste associated with their production. "Varied forms of discovered products and different techniques of processing raw stone confirm that the individual sites had been repeatedly inhabited in different periods of history" - added Prof. Szykulski.

The oldest finds are represented by a massive stone tools made by the Middle Palaeolithic communities (200 thousand - 40 thousand years ago). Archaeologists have also discovered smaller stone products from later periods, as well as millstones, stone grinders and fragments of pottery from the Neolithic.

One of the most interesting discoveries, according to Prof. Szykulski, is a collection of eleven items made of jasper. Items were found on a narrow ledge, located just below one of the mountain peaks. According to the researchers, because of its location, this place was the perfect vintage point from which one could observe most of the valley, as well the steppe in the distance. The form of tools and processing technology indicate that the find dates back approx. 40 thousand years.

"The accumulation of certainly valuable material in one place proves that it had great importance for the inhabitants of the region. Perhaps the discovery is related to a rite" - Prof. Szykulski believes.

Last season of research took place in May 2016. The work is conducted jointly by the Institute of Archaeology of the University of Wrocław, together with the Mongolian Academy of Sciences, the Mongolian Educational University and the Archaeological Museum in Gdańsk.

The study focused on the area of the vast valley located between the southern end of the Gobi Altai Alts Bogdyn Nuruu and its southern foothills known as Barrun Saha Nuruu. The aim of the project is to reconstruct the history of human settlement in the Pleistocene and early Holocene in the semi-arid area of the border of the mountain range of Altai and the Gobi desert.

"This is an unexplored area, in which only one archaeological expedition has worked so far. It is a huge area of approx. 50 thousand sq. km" - said Prof. Szykulski.

Previous research of the Gobi Project was carried out with financial support from the authorities of the Faculty of Historical and Pedagogical Sciences, University of Wrocław and Wrocław Science Foundation Archaeologia Silesiae. Logistical assistance was provided by the regional authorities of the Ömnögovi aimag.