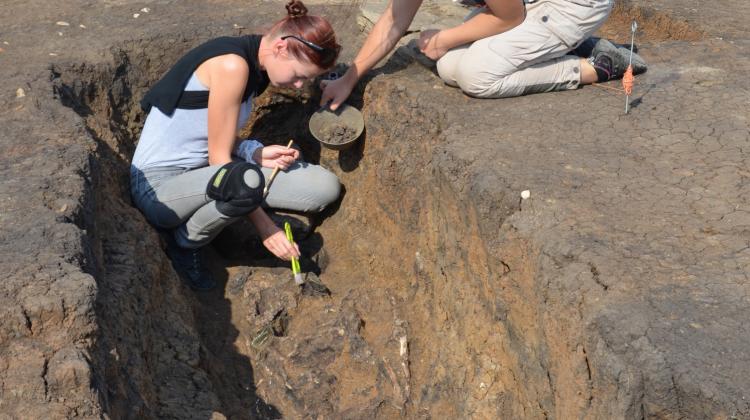 Study of the unique grave, photo by A. Půlpánová-Reszczyńska

Scientists from the Institute of Archaeology, University of Rzeszów studied the grave of an important representative of the Germanic people Marcomanni in Nezabylice in the north-western Czech Republic. It is the largest and richest ancient necropolis discovered in this region after World War II.

Over a few years of research at the site, scientists discovered dozens of graves dating back approx. 2 thousand years. However, this season is clearly considered a breakthrough because of an unusual discovery. Similar tombs in the Czech Republic were discovered mainly until mid-twentieth century. In recent years, archaeologists studied and fully documented only one similar burial, which is why the find is considered exceptional, also in terms of the cognitive opportunities and further analyses.

"The person buried in this tomb was probably someone important to the local community because the effort put into the construction of this tomb must have been considerable" - said Dr. Agnieszka Půlpánová-Reszczyńska from the Institute of Archaeology of the University of Rzeszów, head of excavations.

Two thousand years ago the tomb must have looked impressive indeed. The researchers even speculate that in the stone-lined burial chamber was dug into an older burial mound from the Bronze Age. The deceased was laid on his back in a wooden coffin (perhaps made from a hollowed trunk), placed in deep burial chamber. Behind his head ware two vessels - a saucepan with a handle decorated with bird heads and Dionysus staff motif, made of bronze, and a clay vessel. The garments of the deceased were fastened with a brown clasp. Also preserved is a belt buckle with a decorative tip and remains of a leather belt. Unfortunately, no pieces of fabric have survived to our time. Anthropological studies the deceased was a young adult male, with fairly robust physique and height above 180 cm.

"Although the tomb did not contain as much equipment as the other so-called princely graves, we believe that the structure, dimensions, and the nature of discovered contents allow to classify it in this group of objects. We can also not exclude that part of the tomb at the foot of the deceased had been robbed - similar graves contained more bronze vessels in that place, and in our case there was empty space and more loosely arranged stones" - explained the head of excavations.

Scientists believe that the tomb belonged to a representative of the local aristocracy of the Marcomanni, whose leader founded the kingdom of Maroboduus in the early first century AD. It was the first organization in Barbaricum partially modelled on the Roman Empire, which maintained political and trade relations with Rome.

"Evidence of these contacts and the formation of elites in barbarian societies are the rich tombs with objects from the area of the Empire. We believe that more of this type burials are waiting for us in the next seasons of excavations in Nezabylice. Geophysical surveys we performed earlier indicate the possibility of similar discoveries at this site" - concluded Agnieszka Půlpánová-Reszczyńska.

The burial ground was discovered in 2010 by detectorists during illegal search. Thanks to the fast response of local archaeologists from Chomutov and Most, a number of valuable historical monuments could be recovered: swords, parts of shields, arrowheads, spurs, bronze vessels, clasps and many other small objects characteristic of the Roman period. It was also decided to start excavations. In 2012, Polish archaeologists joined the team and continued their work also this summer.