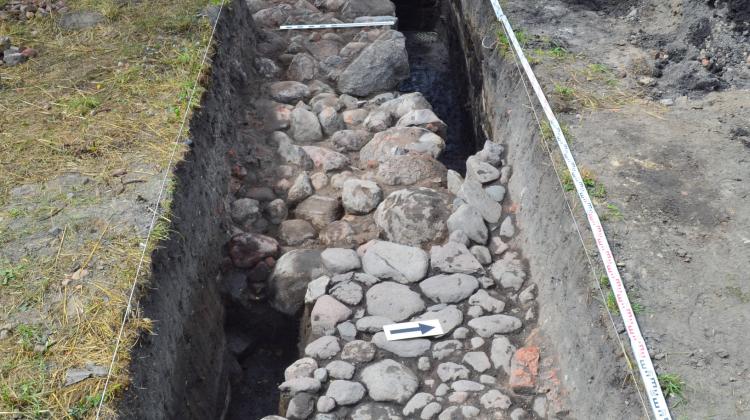 Remnants of the building and pavements from the time of Potuliccy during exploration. Photo by M. Cichocki

Remains of the peripheral walls of the sixteenth-century castle in Sierpc (Mazowieckie province) have been discovered by researchers during archaeological and architectural research.

Remnants of the castle are not visible on the ground. Only during extensive excavations that started in early July, archaeologists stumbled upon the several hundred years old walls.

Field research was preceded by months-long query of available archival sources about the non-preserved stronghold. The research project leaders are Tomasz Olszacki from the Archaeological Laboratory "Trecento" in Łódź, together with Dr. Artur Różański of the Institute of Prehistory, Adam Mickiewicz University in Poznań. The researchers were able to determine that the brick stronghold was built by Castellan of Sierpc Prokop Sieprski, coat of arms Prawdzic, in the early sixteenth century.

"So far, on the north bank of the river Sierpienica we have unveiled the remains of the outer walls built of stone and Gothic brick with a frog made with fingers, pavements associated with that oldest brick castle, and a flooring slab, which is a remnant of the hypocaust furnace, which was part of the heating system of the castle" - said Olszacki.

In the second half of the sixteenth century, the stronghold was expanded by Potuliccy, coat of arms Grzymała. A vast house supported by buttress was built on the south side of the courtyard, heated ovens built with tile panels.

"Soon after war destruction in the mid-seventeenth or early eighteenth century, this large, about 1,500 m2 private castle was demolished and completely forgotten. Our study sheds new light on its history" - added Olszacki.

So far, archaeologists have excavated more than 5 thousand objects, including ceramic vessels, a large set late Renaissance tiles that once ornamented the furnace, skins and devotional medallion depicting Saints Benedict and Scholastica. The latter perhaps dates back to the presence of Benedictine Sisters in the castle in the 1st half of the seventeenth century.

The research work is funded by the Mazowsze Regional Conservation Office and the city of Sierpc. In the future it could become the location of a cultural park with exposed relics of the castle. There are also plans for an exhibition dedicated to the fortress.