Biologists are digging into the DNA of the Slavs 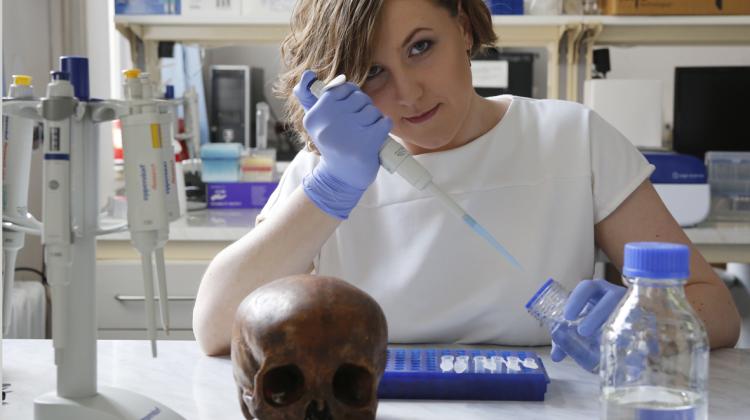 In the photo: Martyna Molak-Tomsia. Source: The Foundation for Polish Science

DNA testing of medieval Slavs may clarify whether the Christianisation led to significant changes in the population of people who lived in the Polish territory. However, reading a thousand years old genome is not a piece of cake, told PAP Dr. Martyna Molak-Tomsia.

Are people, whose bodies were found at an archaeological site, somehow related to each other? Did large migration occur in the study area in a given period of history? Is there a genetic continuity between populations which inhabited the area in the past and live there today? Did historical and military turmoil have an impact on the biological composition of the population? Historians and archaeologists sometimes would not be able to answer such questions without the help of molecular biologists.

Dr. Martyna Molak-Tomsia, biologist at the Museum and Institute of Zoology PAS, who deals with the genetic description of the history of human populations told PAP about the work on DNA obtained from archaeological excavations. The researcher is this year\'s recipient of the Barbara Skarga scholarship granted in the START programme to persons, whose research open up new research perspectives.

Dr. Martyna Molak-Tomsia’s research helps archaeologists to more accurately find out know what happened with the Slavs after the formation of the Polish state. "We are studying the biological material from the period just after the Christianisation. We are checking how the baptism of Poland affected the population" - said the biologist and added that we will have to wait the first results.

She explained that as part of the research she receives samples of biological material from archaeologists. "These are usually teeth, bones or hair from the remains found during excavations. I take these samples and try to get to the DNA they contain" - said the researcher. She explained that in order to do this, she has to grind the bones. "I drill into them to powder them. This powder is then treated with chemicals, enzymes to extract DNA in pure form from cells. Then I have to multiply this DNA" - she explained.

However, extracting genetic information from very old remains is very difficult. "DNA typically was in the ground for a long time and degraded. Genetic material is a modified, fragmented, and the information needs to be put together from small, broken pieces of DNA, like a jigsaw puzzle" - described the biologist.

She explained that when the body dies, DNA repair systems cease to function. "Spontaneous chemical reactions cause the DNA break into shorter pieces in random places, changing its structure and making it difficult to analyse" - the researcher told PAP and added that another factor hampering the studies are micro-organisms that feed on cells and damage DNA.

"But there are methods that allow to piece together very small DNA fragments into a meaningful whole. The physico-chemical and bioinformatics methods then allow to deduce, for example, on the origin of the person or the relationship to individuals from a given site" - she said. She emphasised that fossil DNA is collected from multiple cells, not from a single cell. As a result, there is a chance that the fragment, which has not survived in one of the cells, was preserved in good condition in one of the other cells.

However, the condition of the DNA depends largely on the conditions under which the remains were stored. "The oldest mammalian DNA that we have been able to read, is about 700 thousand years old. It is horse DNA that was preserved in permafrost. At low temperatures, all chemical processes slow down" - described the scientist.

The biologist pointed out that DNA, which can be at least partially read, is usually preserved only in part of the tested samples (30-70 percent.). Researchers are not always lucky enough to obtain the information they are looking for from DNA. Molak-Tomsia told about research conducted several years ago in her institute on the remains that the researchers suspected were of Nicolaus Copernicus. "The alleged Copernicus skeleton found in Frombork Cathedral was compared to hair from a book, which belonged to Copernicus" - she said. She explained that although the DNA in the skeleton was in a good state of preservation, DNA from hair was quite poorly preserved, so it could not be confirm with high degree of certainty that it was exactly the same DNA. "However, the results of skeletal DNA analysis combined with anthropological and historical information seem to strongly indicate that the skeleton is actually the remains of the famous astronomer" - said the researcher.

"Research on the fossil DNA is developing fast. We can expect that in the coming years we will see many interesting results concerning research on the ancient world" - concluded the biologist.