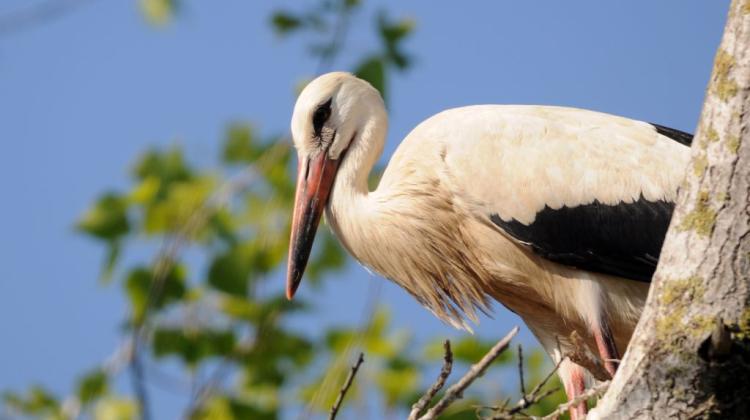 In Poland there are about 15-20 percent less storks than 10 years ago. Situation is the worst in the west, where the decline reaches even approx. 40 percent. Preliminary results of 2014 nationwide count of storks indicate that the Polish population could no longer be the largest in the world.

There are fewer storks almost throughout the country, on average probably by 15 to 20 percent. The most dramatic changes were noted in the west and south, where the stork population dropped by almost a third - says the coordinator of the 7th International White Stork Census, Marcin Tobółka from the Institute of Zoology, University of Life Sciences in Poznań and the White Stork Research Group.

"Compared with 2004, in Lower Silesia there are 42 percent less storks, the situation is similar in the province Lubuskie. In the provinces Opole, Silesia and Wielkopolska we have approx. 30 percent decline, in Pomerania in the range of 20-25 percent . Their numbers are also dropping in Kujawsko-Pomorskie, Małopolska, Podkarpackie, Świętokrzyskie and West Pomerania. Even in the province. Warmia and Mazury, known as the Polish mainstay of the species, there are about 30 percent less storks. Currently, the estimated size of the local population is approx. 7 thousand pairs. Previously, it was approx. 10 thousand pairs" - reported the ornithologist based on the data provided by the regional coordinator Sebastian Menderski.

The situation is most likely good in Mazovia and Łódź region, where the stork population has probably not changed significantly. Podlasie also looks good. According to information from the coordinator Sławomir Niedźwiedzki, in some places there are even more birds - reported Marcin Tobółka after a meeting at the Museum and Institute of Zoology PAS in Warsaw.

The organizers reserve that the counting data from the last breeding season are preliminary and very general, since not all the partial data have been submitted, for example practically no results from the communes in the Lublin region.

According to the previous census, in 2004 in Poland, there were 52 thousand nesting stork pairs, which meant that every fifth stork in the world "was a Pole". "Now, according to initial estimates, the number of storks in Poland does not exceed 45 thousand pairs, maybe even closer to 42-43 thousand. The detailed result will be announced in a few months, at the moment we can only talk about general decline" - said Marcin Tobółka.

The results allow to suspect that Europe\'s largest population will now be in Spain - he added.

Spanish and Polish storks belong to the same species, but represent two quite strongly isolated populations - western and eastern, with the border in Germany. Birds from these groups have different migration routes to Africa. They also have different habits: storks from the east stay in villages and on farms, while their western cousins often prefer the city.

"Storks in Spain and Portugal reduced the journey to wintering grounds, which in turn reduced their mortality (which in the first year of migration is approx. 60 percent - PAP). Many of them even spend winter on the Iberian Peninsula, feeding in dumpsters. Spanish storks also started to prey on crayfish brought to Spain, which further strengthened the population" - described Marcin Tobółka.

The main problem for storks in Poland are changes in the agricultural landscape. "Storks are a proof of the landscape diversity and stick to semi-natural areas dominated by traditional agriculture. They are associated with meadows and pastures, where they look for rodents and amphibians, which are calorie food source. They are also often found on boundary strips" - said the ornithologist.

"Storks disappear from the western Poland, because more intensive agriculture enters - Marcin Tobółka noted. - We have growing crops of rape and corn - plants which the stork avoids, it would not find anything for itself or offspring there. In Wielkopolska, rivers are redirected, and the areas in river valleys drained on a large scale. Stork suffers because oxbow lakes and naturally meandering rivers are destroyed, and ditches and artificial reservoirs are built instead".

In Podlasie, where storks are doing quite well, traditional agriculture is still dominant, with its wet meadows, pastures and boundary strips.

Will storks learn to live in the altered landscape? "Storks in Poland relatively rarely use landfills, reports of such cases are rare" - noted the naturalist. He added that although storks from landfills in the West mature quickly and become ready to breed, feeding at landfills can be dangerous, because the food is sometimes contaminated with heavy metals, and not very valuable.

According to the latest EU guidelines, landfills used by storks in Western Europe are to be closed by 2020 - noted Marcin Tobółka. "This may mean that a large part of storks from landfills - French, German or Spanish birds - will cease to breed there. There are examples of villages in Alsace, where there were a dozen pairs with young, and when the landfill was closed, no more than two pairs remained, without the young" - he said.

"The stork has always been dependent on man. If man had not deforested the land and pastured animals or mowed meadows, white stork would probably be just as rare as the black stork, which sticks to the woods and hardly feeds in open areas - noted the ornithologist from the University of Life Sciences in Poznań. - We are helping storks with proactive protection programs, but also we are also a threat to them, by changing the landscape to an unprecedented extent".