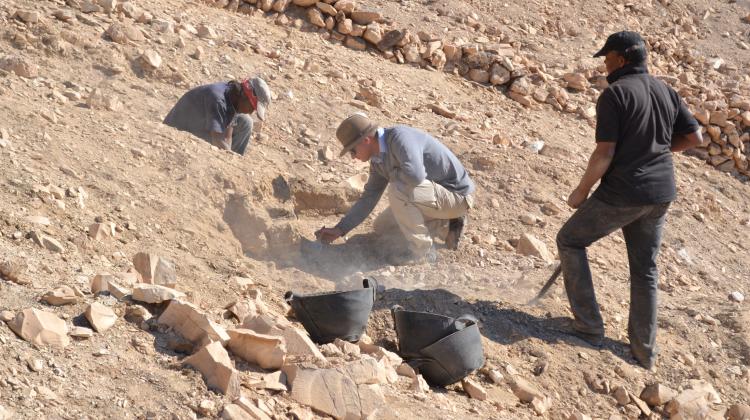 A team of scientists from the Institute of Archaeology, University of Wrocław discovered an about 4 thousand years old burial chapel with partially preserved equipment in one of the ancient necropolises in the area of Luxor in Upper Egypt.

The discovery was made in the yard of the rock tomb of an important pharaonic official - Horhotep in the Asasif necropolis adjacent to the famous Hatshepsut temple in Deir el-Bahri. The deceased lived during the reign of the pharaohs Amenemhat I and Senweseret I of the 12th dynasty.

"This is the first known deposit of monuments of this type known from the period of the Middle Kingdom (2055 - 1773 BC). Within the surviving fragments of walls built of dried mud bricks we discovered a fragment of limestone altar where sacrifices were offered and where ancients prayed. We found dozens of shattered pottery pieces, in which the family of the deceased had brought gifts for the deceased"- explains Patryk Chudzik, head of research.

The chapel was located in the courtyard surrounded by walls made of mud brick and stone, a few meters above the entrance of the tomb complex. The tomb was robbed in antiquity. The more surprising was the discovery of sacrifices made after the funeral by Horhotep’s relatives.

According to Patryk Chudzik, this is the third example of such a structure in the Theban necropolis. However, within the previous two the archaeologists have not discovered objects used in it, like grave offerings or altar. Interestingly, the building was never completed, as evidenced by bricks stacked on the slope a few meters below the preserved walls that were supposed to be used to build the chapel. In addition, by the north wall the archaeologists found a wooden dowel, used to chart a straight line. It was probably left behind by ancient builders.

"Our work shows how pragmatic the ancient Egyptians were. They were bringing and offering gifts and prayed in an unfinished building, in the company of building material. This is not an isolated case. There are more examples in the Theban necropolis, such as the courtyard of the adjacent tomb MMA 512 which was never completed, and the burial still took place" - explained Chudzik.

When working inside the courtyard, archaeologists unexpectedly stumbled upon a small opening in the rock located about 15 meters below the facade of the tomb on the west wall of the courtyard.

"It turned out that we found a so-called accompanying tomb, where probably one of the close associates of Horhotep was buried. Lower-level officials were often buried within the funerary complexes of dignitaries, of whom they were direct subordinates" - Chudzik told PAP.

In the rubble filling the shaft archaeologists found a number of interesting items. Among them were ushebti figures that performed work in the afterlife in place of the deceased (these objects, however, are associated with the subsequent reuse of this tomb), fragments of pottery, human bones, bandages and a flint hammer, which was probably used to carve the tomb.

"Our new findings provide a lot of information about the layout of private funerary complexes in the Middle Kingdom. In addition, our knowledge increased of the ancestors worship, which continued for many years after the death of the owner of the tomb, by family, friends or other faithful"- concluded Chudzik.

The work was carried out from December 2013 to February 2014 under the concessions obtained by the Centre of Mediterranean Archaeology of the University of Warsaw.