Discovery of Polish scientists in a medieval monastery in Sudan 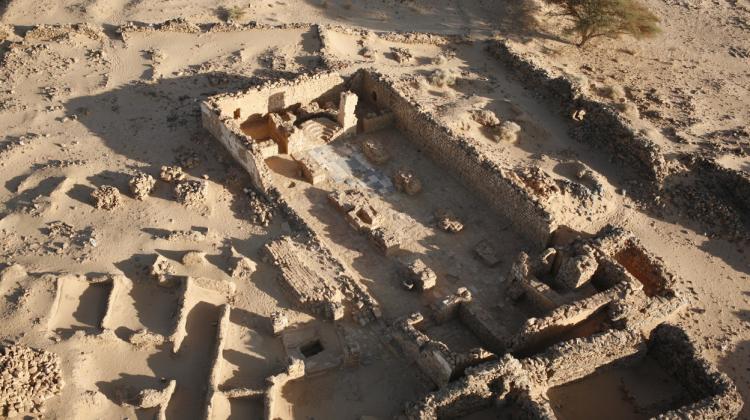 Dozens of previously unknown inscriptions and drawings on the wall of the church and adjoining largest so far identified Nubian sanitary complex of this period have been discovered by Polish scientists in al-Ghazali in northern Sudan.

This is the result of a three-month mission of Polish archaeologists and conservators, completed in March.

This year, archaeologists began excavations east of one of the two medieval churches. In many Byzantine sacral complexes, this was a burial site of the most accomplished members of the community.

"But we were in for a big surprise. Along the east wall of the monastery we dug out a row of 15 toilets. However it may sound and look, it is an important discovery. Nowhere else in Nubia has such a large sanitary complex been discovered" - explained Dr. Artur Obłuski from the University of Chicago, leader of the expedition.

This is another proof found by Polish archaeologists that the nearby monastery had been inhabited by a large group of monks and visiting pilgrims. The archaeologist explained that each toilet was at the end a room in the shape of an elongated rectangle, providing intimacy. In medieval Sudan, ceramic toilet bowls and toilet paper or a substitute were commonly used. The substitute were fragments of clay vessels, with sharp edges smoothed for user comfort; these items were found during the study.

For comparison, as the archaeologist reminded, in Poland in the interwar period very popular were so-called "sławojki", latrines promoted by prime minister Felicjan Sławoj-Składkowski. The politician’s efforts led to the introduction of a regulation requiring to build them near newly built housing estates.

A group of conservators worked on site together with archaeologists. Their efforts focused on cleaning and protection of plaster on the church from the first half of the 7th-century, called the North Church, built of perfectly fitting sandstone blocks. They managed to save the remnants of previously unknown decoration of the church, which imitated the arrangement of wall stones on the plaster.

"By removing a thick layer of mud, we restored part of the original appearance of the church, which is now glowing white from a distance. The glow of light reflected in the African sun is so blinding that we could work on the south wall only in early morning or late afternoon" - described Cristobal Calaforra-Rzepka, head of the conservation work. Cleaning of plaster also allowed to discover dozens of previously unknown inscriptions and drawings depicting saints and Jesus Christ.

The study of the inscriptions is carried out by Dr. Grzegorz Ochała from the University of Warsaw. His analysis shows that, as in many other places in medieval Nubia, cult of angels was extremely popular also in al-Ghazali. Among the inscriptions on the walls of the North Church, Dr. Ochała identified the names of the four archangels: Michael, Gabriel, Raphael and Uriel.

"Particularly important are the writings scratched on ceramic vessels used in everyday life to eat and drink. We know examples from both al-Ghazali and many other places. Apparently the Nubians wanted powerful celestial Generals to watch over them in all, even the most mundane situations and activities" - said the scientist.

According to Dr. Ochała, a particular form of expression of reverence for the angels were male names containing references to these creatures. They were to provide additional protection for their carriers. This year, archaeologists discovered a ceramic bowl with signature engraved by a monk and priest named Angeloforos (one who carries an angel).

Ghazali is one of two well-known places of worship in medieval Nubia located outside the Nile Valley. The monastery is located in Wadi Abu Dom, the valley crossing the desert Bajuda, which once was a busy trade route in the north-eastern Africa. The complex size equals the Byzantine imperial foundations, such as the famous monastery of St. Catherine in Sinai. To date, Polish archaeologists have discovered two temples: larger stone North Church and smaller South Church built of mud bricks.