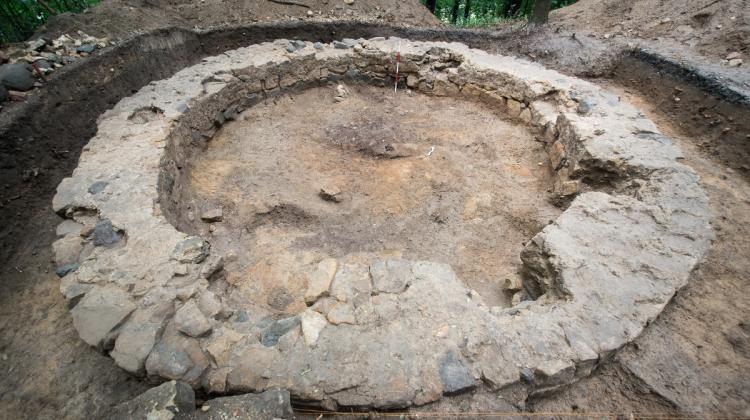 Archaeologists from the University of Wroclaw discovered the remains of the gallows during research on the Mount Mieszczańska in Złotoryja (Lower Silesia). It is the largest of the known preserved brick gallows in Silesia - said Dr. Paweł Duma.

"Until 2015, the exact location of the former place of execution with brick gallows was unknown" - explained Dr. Paweł Duma of the Institute of Archaeology, University of Wroclaw, who led the excavations.

"The foundation of the structure is preserved in very good condition. It has a diameter of 7.65 m, which makes it the largest currently known and preserved gallows in Silesia. Materials used for its construction include local sandstone and field stones" - said Dr. Duma.

Originally the elevation, on which the structure was located, was called Mount Gallows (Galgenberg), but a few years after the dismantling of the gallows in 1810 the name was changed to Mount Mieszczańska (Buergerberg). At the same time trees were planted in the area, creating a park that exists to this day.

Dr. Duma mentioned the "unusual and rare find" made within the gallows, which is a complete execution chain.

"This chain allowed to keep the convict\'s corpse to be displayed longer. Plain rope broke off more quickly under the weight of the body and atmospheric conditions" - the scientist described its functions.

Inside the gallows casing, archaeologists found single bone fragments of convicts - including mandibles. They were not in anatomical order - the dead were not buried there on purpose.

"The corpses were hung until the decay of tendons" - Dr. Duma explained the presence of individual body parts, which become detached from the body. The scientist added that corpses would hang on the gallows up to two years, according to written sources of the era.

The researchers also found iron hinges, used to nailed convicts\' cords to the wooden beam, as well as buttons and fragments of clay pipes.

Archaeologists estimate that the brick gallows was built in the sixteenth century. This estimation is based on the determination of the age of broken pottery found within the gallows. It is known, however, that the place of execution functioned since the 15th century. According to Dr. Daniel Wojtucki of the Historical Institute of the University of Wroclaw, approx. 30 executions were performed until the end of the functioning of the gallows in the beginning of the 19th century.

In the vicinity of the place of execution was a slaughterhouse, a place where dead and stray animals were brought. The executioner had a monopoly on this type of occupation - he was also a dogcatcher. Therefore, it is easy to explain the presence of animal remains, including dog remains, inside the gallows casing. Dr. Duma noted that perhaps this was the way to avoid, out of laziness, additional work in the form of digging additional graves. He explained that a dogcatcher earned more on catching animals than on executions, which over hundreds of years of the functioning of Złotoryja gallows "were relatively rare".

The research took place with the support of the City Council in Złotoryja. The municipality authorities plan maintenance and displaying the foundation. Funds for the study came in large part from a National Science Centre grant, whose aim is to identify dogcatcher facilities in modern day Silesian city.