Leeches are often indispensable in medicine 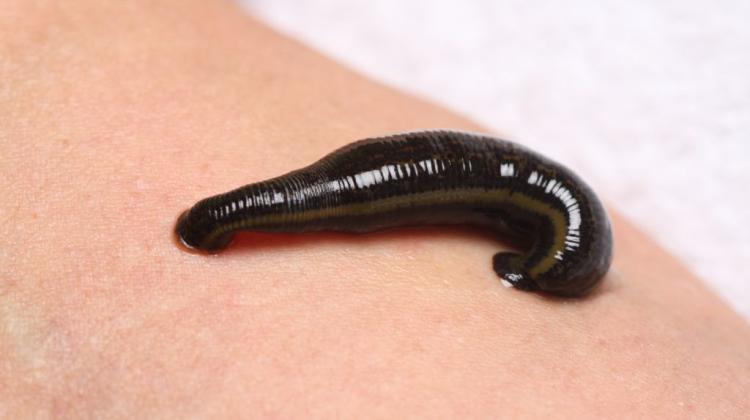 Complications after replantation of previously lost limbs, arthritis, reconstructive surgery - these are the areas of medicine, in which leeches still provide valuable services. Nevertheless, these parasites are not commonly used in Polish hospitals.

For over 10 years, leeches have been used by doctors specializing in limb replantation and microsurgery at St . Hedwig Hospital in Trzebnica (Lower Silesia). Annually, the facility uses about 300 leeches.

"Of course, we use them only in patients who require such therapy. We use leeches especially in cases of rapidly progressive vascular thrombosis and tissue edema after replantation surgery, despite the use of drugs. We have also discovered a number of other conditions that leeches help to heal, like algodystrophy syndrome and joint inflammation associated with osteoarthritis" - told PAP Dr. Maciej Paruzel, surgeon and President of the Polish Society of Hirudology, who performed Europe\'s first finger replantation in a 5-year-old.

"Leeches also proved to be indispensable also in reconstructive surgery, where patches of skin are at risk of ischemic and necrotic process due to thrombosis, and drugs can not reach the sites at risk with blood. In general, the indications for hospital treatment with leeches apply to patients undergoing microsurgery, hand surgery, plastic and reconstructive surgery and oncology" - he added.

According to Dr. Paruzel, patients rarely have concerns about leeches and tolerate therapy very well. "We just have to talk to patients and explain why we do this, and patients always accept that. When facing a dilemma: to have or not to have a hand or finger, everyone would agree" - he noted.

Leeches can also be used in an outpatient setting. "Sometimes the effects of such therapy are shocking. Lower cholesterol, stabilised blood pressure, reduced migraine headache pain and tinnitus are just some examples. There is a huge number of diseases in which medical leeches have produced a positive results. But you can not create a single list of indications, because every situation requires consideration of comorbidities, medication, patient\'s condition" - said Dr. Paruzel.

The best therapeutic effect of the use of leeches was found in inflammatory diseases, pain and thrombophlebitis. They should not be used in patients with bleeding diathesis, immunodeficiencies, taking anticoagulants, with severe damage to internal organs or with evidence of impaired wound healing. In principle, leeches are not used to treat pregnant women and small children .

According to President of the Polish Society of Hirudology, the use of leeches in Polish hospitals is still marginal, although in recent years more departments specialising in reconstructive surgery , plastic surgery, hand surgery, microsurgery and oncologic surgery have been using them as a form of complementary therapy to classical therapeutic procedures. This trend has been observed all over the world since the 1970s.

Dr. Paruzel explained that hirudotherapy belongs to medical procedures according to the International Index of Procedures ICD-9. Despite this, it isn’t always reimbursed by the National Health Fund. "There are places in Poland, where the National Health Fund pays for leech therapy in hospitals, but in most cases this therapy is not refunded. Maybe this will change in the future. In some countries it is paid for with public funds, for example in the United Kingdom, the United States and Russia" - he noted.

In Poland, leech therapy also used by many people who are not doctors. According to Dr. Paruzel, however, standard should be their cooperation with a doctor. "In such a model, hirudotherapy does not need be part of the Polish therapy underground, associated with divination, shamanism and other methods pseudotherapies" - he stressed.

Medical leeches must come from legal laboratory cultures, which are under veterinary control, and their source of origin must be documented with relevant certificates. Leeches of unknown origin, usually obtained from nature, can carry organisms dangerous to human.